Subscribe Now Get The Financial Brand's FREE Email Newsletter
After running up record debt-to-income ratios during the bubble economy of the 2000s, young adults shed substantially more debt than older adults did during the Great Recession and its immediate aftermath.

According to a Pew Research Center analysis of data from the Federal Reserve and other government sources, the median debt of households headed by an adult younger than 35 fell by 29% between 2007 to 2010, compared with a decline of just 8% among households headed by adults ages 35 and older.

Also, the share of younger households holding debt of any kind fell to 78%, the lowest level since the government began collecting such data in 1983.

Pew says these shifts in the debt profile of younger adults reflect a broader societal shift toward delayed marriage and household formation that has been under way for decades. 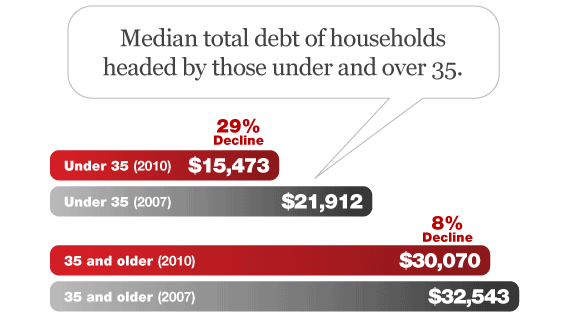 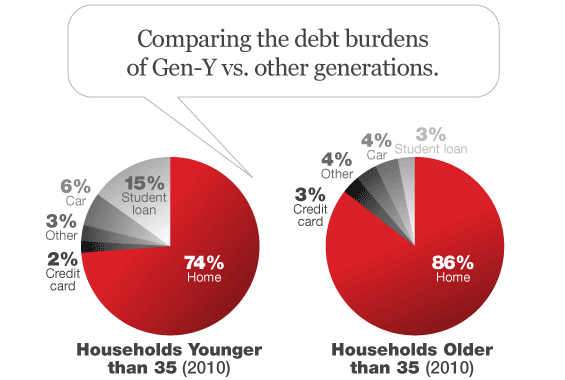 Student Debt on the Rise

Pew notes that the decline in vehicle ownership may be a reflection of declining preferences to drive among the young adult population. Federal Highway Administration figures indicate that the number of licensed drivers between the ages of 18 to 34 increased from 58.2 million in 2001 to 60.3 million in 2011. So the share of young adults with a license fell from 86% in 2001 to 83% in 2011.

Fewer Home Loans on the Horizon

By 2011 the flows in and out of homeownership among young adults were more lopsided. About 1.5 million young adult households who were previously homeowners became renters, but only 900,000 young adult renters became homeowners.

One way to measure a household’s financial well-being is its debt-to-income ratio, which compares total outstanding debt to annual income. As the figure to the right indicates, the debt-to-income ratio of younger adult households more than doubled from 1983 to 2007, when it peaked at 1.63. By 2010 it had fallen back to 1.46. By contrast, the ratio among older households continued rise through this entire period. As of 2010 it has risen to 1.22, still below that of younger households.

You can download the complete 41-page report “Young Adults After the Recession” as a PDF instantly from the Pew Research website.