Subscribe Now Get The Financial Brand's FREE Email Newsletter
Twentysomethings are frustrated by banks, with less than a fifth of Gen-Y saying they have recommended their banking provider in the last year.
Subscribe Now!

Just 17% of those ages 20 to 29 felt their primary financial institution was worthy of their personal endorsement. The other 83%? Not so much. The Young Money survey, conducted by financial services consultancy MRM, set out to measure the attitudes of Gen-Y towards financial subjects like banks, money and home ownership.

“Today’s twentysomethings are tomorrow’s big earners and if banks fail to win their loyalty and trust today,” Taggart cautioned, “they are storing up big problems in years to come.”

For the last couple decades, banks have pushed customer interactions to alternate channels. According to MRM’s research, this has often added — rather than removed — the friction from banks’ relationships with Gen-Y.

For instance, some one in ten of twentysomethings (10%) admitted to hanging up prematurely during a phone call to their bank due to being “frustrated or angry.” Those in their early 20s (20-24) were more likely to have done this – 13% compared to 7% of 25-29 year olds.

Almost a quarter (23%) of people in their 20s had visited their bank in the last year only to find it closed.

While 7% of those in their 20s say they have complained about their bank’s services via social media, less than half as many — 3% of those surveyed – reported having had a banking problem solved through social channels. 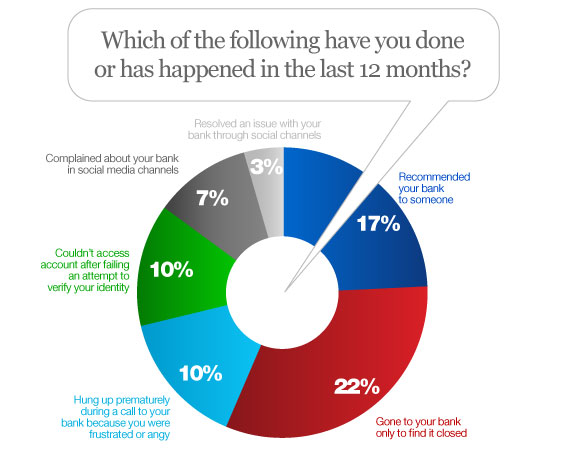 How far will Gen-Y go for money?

In its study, MRM proposed a range of actions Gen-Y might take — from the conventional to the controversial to the illegal — and asked survey participants if they knew another twentysomething who had done those things to raise money.

More than a fifth (22%) of respondents said they knew of someone in their 20s who had gone without food in order to cover expenses or make money.

Nearly one in every five (19%) of our respondents knew of someone in their 20s who had taken out a payday loan.

Some 3% of our survey group said they knew of a man or woman in their 20s who had sold their hair in order to balance the books. 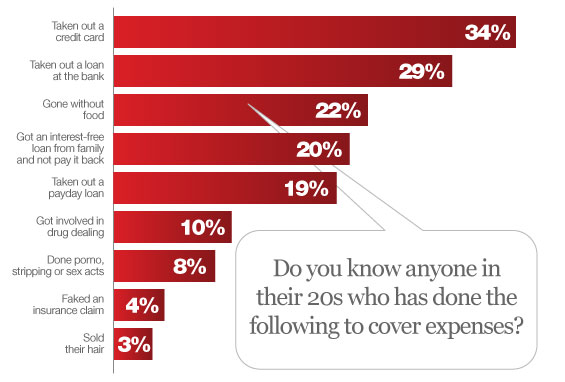 Financial struggles or concerns appear to play an important role in affecting twentysomethings’ feelings. Nine out every 20 of our survey group (45%) said they will never have enough money to buy a home – with 25-29 year olds much less likely to expect to be able to buy a property than those in their early 20s (54% and 38% respectively). Non-graduates in their 20s are also more likely than graduates to think they’ll never be able to afford a home (54% compared to 37% respectively).

Growing unemployment figures might also be weighing heavy on the minds of our young adults. More than a third (38%) said that they have little job security which makes it difficult to them to buy a home. One in seven twentysomethings (14%) don’t want to be tied down to a property.

One in seven young people (14%) think that owning a property is actually a poor investment. Almost one in five (18%) of 20-24 year olds look negatively on a home’s investment potential, compared to 10% of those aged 25-29.

One in ten (10%) plan to stay at home and live with their parents rather than purchase a property. 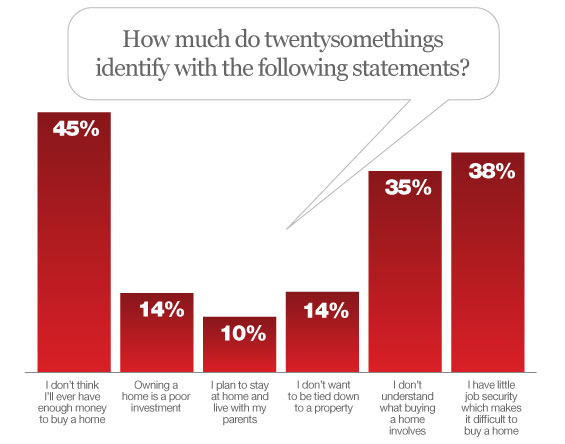