Subscribe Now Get The Financial Brand's FREE Email Newsletter
An international study of Millennial attitudes towards banking and online banking services points towards the important changes banks and credit unions must make when targeting this critical consumer segment.
Subscribe Now!

Saying that Millennials love their tablets and smartphones should hardly come as a surprise. But the extent to which they will transform the marketing landscape in the banking industry should not be underestimated.

Research conducted by Gemalto, an international provider of mobile banking solutions, found that only 3% of Millennial consumers had neither a smartphone or tablet device; 92% own smartphones, 43% own a tablet — 38% own both. 70% of Millennials spend two hours or more every day on their mobile device, with over a third (37.7%) spending more than five hours.

In a report titled “Generation mBanking” that summarizes Gemalto’s research findings, over a quarter (27%) of young people say they have never visited their branch and only 14% say they prefer doing their banking in person. This is in stark contrast to 82% of those ages 18-60 in the US who say they’ve spoken to a teller or a bank employee at a bank branch in the past 12 months. 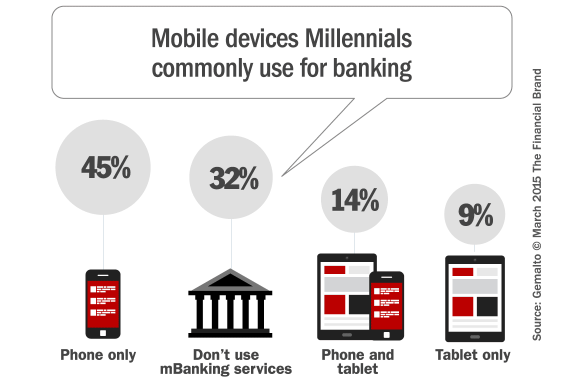 In digital channels, 77% of Millennials say they are using online services every month. Banking via smartphone or tablets is also gaining traction, with 62% using them at least once a month. In fact, a quarter of all Millennials already believe mobile banking has become an “essential part” of managing their finances. 35.9% think banking via mobile devices helps them maintain better control over their finances, and one in six say their generation as a whole will be more financially responsible than others as a result of having such immediate and regular access to their accounts.

Millennials will be the first generation of banking consumers to be knee-deep in online and mobile channels throughout their financial lives — “digital natives,” they are called. However, despite their comfort using digital channels, they are just as concerned as other generations when it comes to managing their money through mobile devices. Gemalto says two thirds (67%) are concerned about the risks they face when using a mobile device to access banking services, and nearly half (48%) said that they would switch banks if they felt their institution’s mobile app had inadequate security protections. 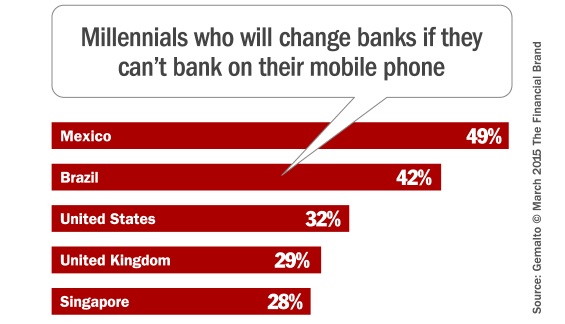 “In a world where the pace, quality and intuitive nature of apps has been defined by innovative, agile consumer technology companies, such as Google, YouTube Facebook, Spotify and Twitter; financial services companies still need to work hard to catch up,” Gemalto says. “Apps from competitors can be downloaded and installed in seconds; banks need to realize that a fiddly, unresponsive or unreliable app could well cost them customers quickly.”

Millennials are far more likely to air any grievances publically in social media channels. According to Echo Research, 36% of young people had used a social media platform to contact a big company, with 65% saying it was a better way than call centers to get in touch with companies. One in seven consumers says they see search online to see how others feel about a bank when switching institutions.

Gemalto’s research shows smartphones and tablets have become a core part of Millennials lives, but they demand security and good service, despite sometimes putting themselves at risk. The results point to several lessons banks should heed as they look to the future:

Don’t Underestimate the Significance of the Mobile Channel. The impact of smartphones and tablets on the financial services industry has been huge, and will continue to grow as the younger generation of digital natives matures and expands its need for and use of mobile services.

Mobile is a must-have for Millennials. They view mobile banking as a source of empowerment and independence. Financial marketers need to mention their mobile solutions (at least to some degree) whenever they communicate with this segment.

“The old tradition to bundle products and offer customers a package based on their income and status when they come in branch no longer works,” Gemalto cautions. “Instead banks should be using the mobile channel to cost-effectively engage and deliver product offers and general content to the right customers at the right time, driving organic growth and customer retentention – and ultimately increasing revenue.”

Gemalto says this can come in various forms from dynamic messaging programs to deliver “tappable” tailored offers and content to the pre-login mobile apps screen, to contextual messages to customers based on their profile, activities and attributes. Mobile can also been used to engage people in non-sales experiences as well. For example, messages about digital fraud prevention or value-added content such as guides for first-time homebuyers or parents.

Build Out Your Feature Set. It is critical that your institution’s suite of mobile banking tools and features remain competitive and relevant. A mobile banking app needs to be more than just checking your balance. Young people increasingly don’t want to visit your branches in person, so you need to offer them the same services via their smartphone or tablet. Whether it’s applying for a credit card, making international transfers or paying bills, you need an app that will support your young customers in whatever task they want to achieve.

Don’t Let Security Issues Damage Millennials’ Trust. Confidence in banking institutions took a big hit after the crash in 2008, but it seems that negative sentiment isn’t necessarily felt by the younger generation, who retain a high level of trust. But banks need to make security of mobile services a priority, since many young people will jump ship to a competitor if they think they’re at risk.

Banks and credit unions have to get their mobile security features right, and financial marketers should stress these security features to allay Millennials mobile banking fears. Education and awareness around security issues will help protect them and keep them loyal.