In a recent survey on FindABetterBank, 25% of active checking account shoppers indicated they don’t currently have checking accounts. That’s a sizeable share of new reachable customers (which makes sense given the relatively low attrition in the market today compared to a few years ago). More than half of these “unbanked” shoppers are under 30 years old, and half reported household incomes under $25,000 per year. These shoppers, with little or no banking experience, have fewer product feature requirements than switchers. 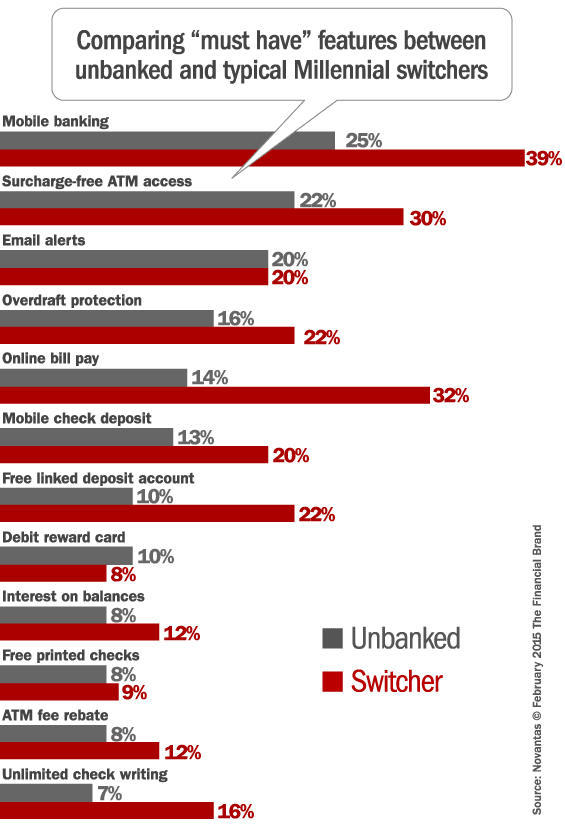 One would expect these digital natives who have little/no branch experiences might gravitate towards mostly-digital solutions, like those from Ally or Capital One 360. Or perhaps they’d choose alternative products like reloadable debit cards. While the research revealed that unbanked shoppers are most likely to select a low-cost account as their “top choice” (i.e., they’ll select the account with the lowest estimated fees), banks with large branch networks are more likely to win… provided they’re one of the lower cost options.

Awareness. When shopping for a new checking account, many consumers will only consider banks and credit unions that they’re aware of, and physical branches and ATMs are the biggest sources of awareness. It’s difficult for smaller institutions to compete on awareness because they can’t outspend on advertising.

Convenience. The largest banks have been able to extend the notion of convenience beyond physical branches through advertising and messaging. For example, Chase and Bank of America have recently been advertising about ApplePay, with a focus on convenience.