Subscribe Now Get The Financial Brand's FREE Email Newsletter
How ownership among Millennials' is on the rise, but so are their regrets. Over two-thirds who have bought homes admit to buyer remorse. Yet owning a home remains a top priority for this key demographic. How can banks and credit unions help? Millennials need advice, the right mix of products, and easy-to-use tools to keep the American Dream from turning into a nightmare.

“We can swing this!”

That’s what the typical Millennial optimistically thinks as they start looking for their first home.

All the cool VR tools and mobile apps available to home buyers today make it easy for Millennials to find houses they like. But then they realize that buying a home can be competitive, particularly in tight markets. Then the worry sets in.

“Yikes! Everybody else out there is using the same tools, and there are not many houses to look at. We’ve got to move fast on the next one that looks even close to meeting our criteria.”

And that’s exactly what they do: they pounce on the next house they see that’s acceptable. Unfortunately, a few months down the road, a case of buyer’s remorse starts to set in.

According to a study from Bank of The West, a startling 68% of Millennials who had purchased a home have serious regrets about how prepared they were for the home buying process and the home they wound up with. The bank included other demographic segments in the survey and each expressed fewer regrets over their latest home purchases than Millennials — 55% of Gen X and 35% of Baby Boomers had home-buying remorse.

Roughly one in five Millennials the following top regrets:

Real estate conditions are highly localized, of course. In populated markets, a vortex of limited housing inventory, high prices, and low levels of starter-home construction, has made home buying a competitive sport. If you don’t move fast, someone else will grab the property so there is little time to consider whether that stain in the basement is indicates a much bigger problem.

According to a Zillow report on housing, home buyers take over four months (4.3) on average searching for their home, with Millennials taking the least amount of time: 3.9 months. The study also found that nearly a third (29%) of buyers go over budget, with urbanites the most likely to go over (42% versus 25% of suburban and 20% of rural home buyers).

“They’re renting until their 30s and that first house they buy is a million dollars,” Rascoff explained. “So [young adults] are still buying homes, they’re just buying them later and buying them bigger.”

These psychologically and financially turbulent conditions present opportunities for financial institutions to do more than simply lend the money for a deal, especially considering that plenty of Millennials yet to buy a house. Among the Millennials Bank of the West polled, 42% already own a home, 46% rent, and 12% are living with family or staying with friends. There’s still a big market.

Read More: Are You Ready For The Millennial Mortgage Boom? 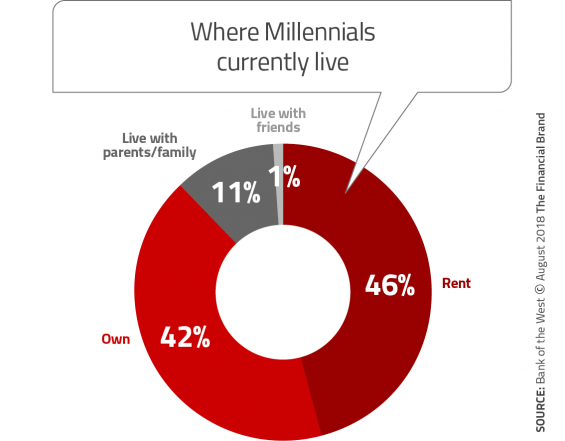 Primed (and in the Prime Age) to Buy a Home

There are differing statistics out there, but the general consensus is that the rate of Millennial home ownership is still lower than previous generations at the same life stage. Studies generally put Millennial ownership at somewhere between 36% and 42%.

The National Association of Realtors (NAR) reports that “slightly more than a third of all home purchases were made by Millennials over the past year, which kept them as the most active generation of buyers for the fifth consecutive year.”

The important point for retail financial institutions in the home lending business, is that a large slice of a very large demographic segment — which fits squarely in the prime home-buying ages of 29-32 — still needs, and wants, to own a home. In fact, one out of five will raid retirement money for the necessary down payment.

Hundreds of articles have already been written about the habits and preferences of Millennials, and with good reason. This generation of consumers, according to Pew Research Center, is expected to surpass the giant Baby Boomer Generation as the largest living adult generation by 2019. The 2016 U.S. Census (the latest data available) put Millennials at 71 million strong, compared with 74 million Boomers.

Any tips for tapping the potential of a market that size is potentially lucrative for financial marketers. Along those lines, The Bank of The West survey offers these two:

The Dream is Still Alive, Despite Economic Woes

Millennials would have been between 10 and 25 years old when the Great Recession arrived in 2008. It left a deep impression, not unlike how the Great Depression scarred many Millennials’ grandparents. While Millennials “feel overwhelmingly confident in their ability to use financial products” today, Bank of The West reports that 65% of these young adults say that living through that period made them more financially conservative.

Results from a 2018 Prudential Millennial study suggest a slightly less optimistic outlook, saying that 53% of that generation do not think it’s likely they will do better economically than their parent’s generation. 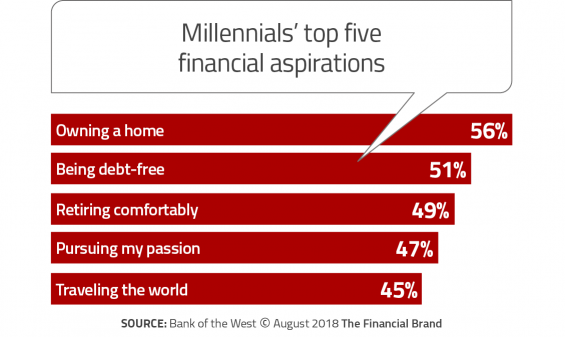 The Bank of the West survey probed what the “American Dream” means to Millennials. Owning a home came in firmly as the number one criteria at 56%, followed by “being debt free” at 51%. Commenting on the apparent contradiction, the report states that “Millennials have a complicated relationship with debt.” Respondents were asked whether they agreed with this statement: “You’ve only really made it when you’re debt free.” 69% of Millennials agreed with that.

More than half (58%) of Millennials say they pay off their credit card balances in full each month. At the same time, however, they are comfortable with leveraging themselves for home ownership. As the NAR reported in its Home Buyer and Seller Trends report, 86% of Millennials believe buying a home is a good financial investment.

They’ll Raid Retirement Just to Get a Home

Not all of the 58% of non-homeowners are ready, willing or able to buy a house, but of those that are, almost one out of five would fund the down payment by taking money from an IRA or 401(k) retirement plan. In fact, almost three out of ten of the Millennials that had already bought a house funded the down payment with retirement money.

This statistic alarms some people, including Ryan Bailey, Head of the Retail Banking Group at Bank of the West, who said that some who do this “may be inadvertently cutting off their nose to spite their face.” He added that with careful planning, Millennials can have the house without compromising their retirement funds.

“The issue is not the inability to plan,” explained one Millennial in a verbatim comment found in Prudential’s Millennial study. it is the inability to save. Houses are expensive, kids are expensive, and currently I don’t even have enough money to send one kid to just one semester of college. Saving money for retirement just isn’t a luxury anyone has.” – Ben T. Age 25, Illinois.

This is not to say no Millennial is saving, however. Bank of the West found that 50% of Millennial homebuyers had funded their down payment with cash savings. Beyond that they used the usual range of options — using the proceeds of another loan, a gift or inheritance, borrowing from a family member, etc.

Overall the picture is one of latent opportunity for not only lending but financial education. Through a combination of online tools and knowledgeable home buying experts on tap during weekends and evenings, bank and credit union mortgage lenders, can help lower the stress level of not only Millennials, but any category of home buyer.