Gen Y represents the future — the highly-coveted credit-driven market. They are the ones going to college, getting their first credit cards, opening new bank accounts, getting their first real jobs, buying new cars, getting married, buying houses and having kids. All that stuff takes cash — cash they don’t have.

But what about Gen X? What do they need? Not as much as Gen Y. What does Gen X have? Not as much as Boomers. Gen X has already graduated college, got bank accounts, got home loans, etc. They have jobs, and equity in their homes (that they’ve probably already tapped). They don’t have much in the way of real significant investable assets. Maybe $100,000? Maybe not even that much. Whatever amount it is, it surely isn’t as much as Boomers. What Gen X does have is inertia. 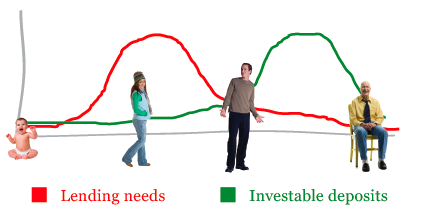 A crude diagram depicting a financial marketer’s most basic age segments.
It shows how Gen X is essentially in “no man’s land” when it comes to financial services.

When we’re very young, we don’t have any money nor any need to borrow much. There may be an allowance and the occasional plea: “Mom can I borrow $10?” By our 20s and early 30s, we’re at the height of our borrowing stage. As time goes by and our net worth grows, our need to borrow decreases.

Key Takeaway: This is nothing new. This same thing has been happening for generations. We just have different names for those generations.