Subscribe Now Get The Financial Brand's FREE Email Newsletter
A study from Fiserv reveals Gen-Y is more active in brick-and-mortar channels than you might think. Meanwhile, checks continue their march toward extinction, and tablets are about to take off.
Subscribe Now!

Gen-Y Uses Branches More Than Everyone Else

Despite Gen-Y’s love for all things digital, they don’t just bank online or on their phones. While Gen-Y certainly prefers the digital channel, it’s not like they’ve declared a boycott against physical channels (as many in the financial industry widely believe). Indeed, it’s exactly the opposite. According to the 2011 Consumer Trends Survey from Fiserv, Gen-Y consumers are more likely to visit a branch, drive up to an ATM, or call a call center than any other age segment.

As Gen-Y matures as financial consumers, they will be more likely to purchase homes, start new jobs and start families than other generations. “Many of these life changes may lead to branch visits for activities such as applying for loans, opening new accounts or getting financial advice,” notes Daniel Steer, Director/Consumer Insights at Fiserv. “The complexity of financial processes, fear or unfamiliarity could also cause Gen-Y consumers to regularly seek help through more service-intensive channels.”

Ron Shevlin, a Senior Analyst with Aite, has a different explanation for why Gen-Y is using traditional brick-and-mortar channels so regularly. “I don’t have research data to back up my assertion, but here it is anyway,” Shevlin writes on his blog. “99% of the time, Gen Yers use branches because they can’t get their problem resolved in any other channel. Simply put, Gen-Y use branches not because they want to, but because they have to.”

“Gen Y consumers appear to have an ‘all the information, through all the channels, available all the time’ attitude,” Steer says, but he thinks there’s more going on than just impatience. Gen-Y consumers need real-time financial information because they have little money and no margin for error.

“Those born after 1980 grew up in the age of microwaves, cable television, email, and cell phones,” observes Steer. “Asking them to wait overnight for up-to-date banking information is like asking them to send a telegraph or walk across the room to change the television channel.”

The use of checks has been on the steady march towards death for at least a decade. Checks as a payment tool have declined 10% in the last six years. At this pace, checks will be near extinction within another six or seven years, by 2020 if not sooner. 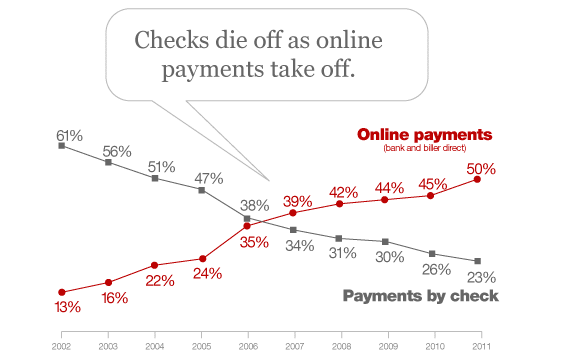 From January 2010 to July 2011, the number of U.S. online households using online banking increased by 9%. The number of households paying bills online (whether directly at company websites or using their financial institutions’ websites) also increased by 11%.

The percentage of deposit, credit and savings accounts opened entirely- or partially online increased significantly from 2010 to 2011. In 2011, half of respondents who opened a money market account did so online, up from 16% in 2010. Meanwhile 42% of respondents who applied for a credit card did so online, up from 31% in 2010. Similar increases were seen across other accounts such as first mortgages and car loans. 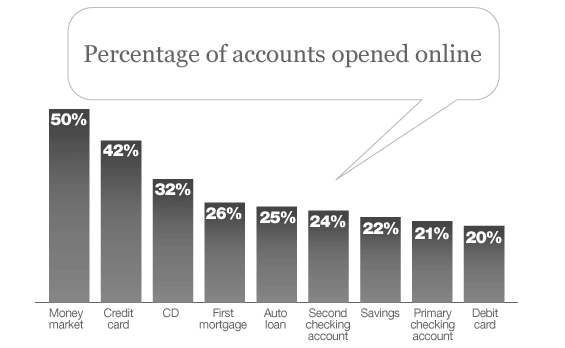 Consumers are moving beyond using the mobile channel solely for informational purposes (such as checking balances or locating an ATM), to using it for transactions like paying bills and transferring funds.

The most common method of to access banking information with a mobile device is through a browser (60%), followed by downloadable app (41%) and text messaging (32%).

Current and future tablet owners are interested in using their tablet to access financial services, with 45% saying they would like to use their tablet for banking. When asked which banking services they would like to access via tablet, consumers chose: view monthly statements (69%), pay bills (56%), view real-time account information (50%) and transfer money between accounts at the same financial institution (49%).