Subscribe Now Get The Financial Brand's FREE Email Newsletter
Millennials are desperate to buy homes. But many are cash strapped and not particularly well-informed about the process. It's a challenging picture for bank and credit union mortgage lenders, but can they ignore the largest generation and let it go to fintech lenders? The need for knowledgeable advice gives traditional lenders an edge — if they use it.

Even though increasing numbers of Millennials have been buying homes, recent findings confirm that huge challenges remain for this very large generation when it comes to home ownership.

At least some of the oldest Millennials (in their later 30s in 2020) have now had time to become established in the workforce and build their incomes. As a whole, however, Millennials continue to struggle with housing affordability, the result of factors including stagnant wage growth, housing costs, high rents, and, for many of them, student loan debt that prevents saving toward a down payment. This situation is significant considering that 4.8 million Millennials will turn 30 in 2020, according to Realtor.com.

An analysis of responses from 10,000 Millennial renters in the U.S. by Apartment List, found that only 13% of them will be able to afford a 20% down payment by 2025. Even if you drop the down payment to 5%, still less than two in five (39%) Millennial renters can provide that, the report found. “Without a dramatic turn of events, it appears unlikely that Millennial homeownership will catch up with previous generations anytime soon,” states a Rentonomics blog on the Apartment List website.

“60% of Millennials could not correctly answer the question: ‘What is interest?'”

Millennial homeownership levels are now about 10% behind where Gen X and Baby Boomers were at the same age, according to the Urban Institute. Even if Millennials never actually catch up, the fact remains that a large percentage of this huge generation very much wants to own a home.

In fact they’re nearly desperate to do so, as described in the 2020 Millennial Homebuyer Report from Clever Real Estate. Nearly nine out of ten Millennials surveyed by LendEDU in mid 2019 insisted they want to become homeowners one day, and 65% predicted they would do so within the next five years.

Financial institutions can’t magically remove all the hurdles that Millennials face. But clearly it’s in their interest to do what they can, especially because many of the hurdles are financial in nature.

Down Payments: The Primary Obstacle 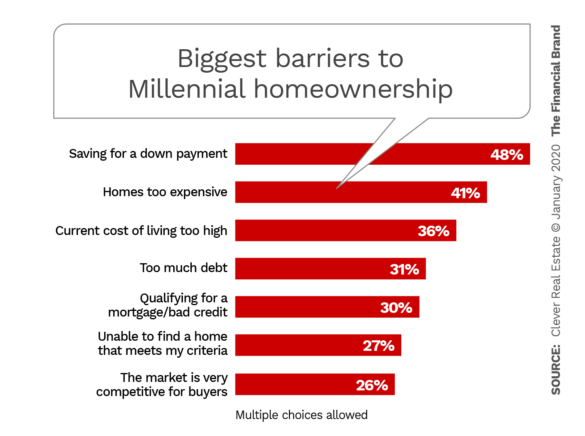 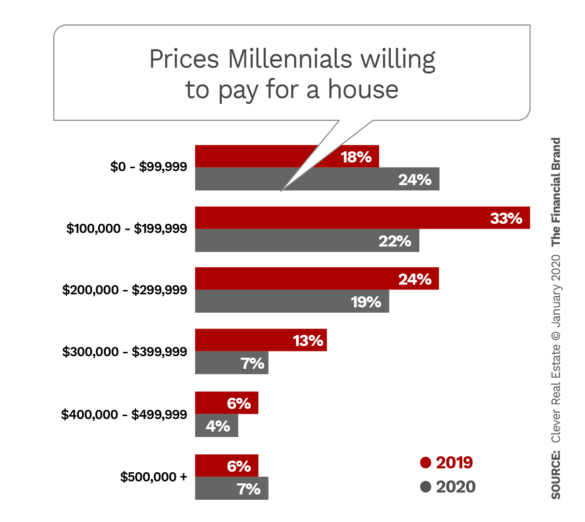 Yet, even for a home priced at $210,000, which can certainly be found in some lower-cost markets, a 20% down payment would be $42,000, and only 30% of the survey respondents have sufficient savings to cover that, Clever states.

However, seven out of ten Millennials say they are planning to put down less than 20% on their new home. In fact, just over a quarter plan to put down less than 10%. That means they’ll likely have to pay for private mortgage insurance, raising their overall cost. Federal Housing Administration loans are an option for many Millennials who can only afford a low down payment, but FHA loans, Clever notes, can result in higher monthly payments. 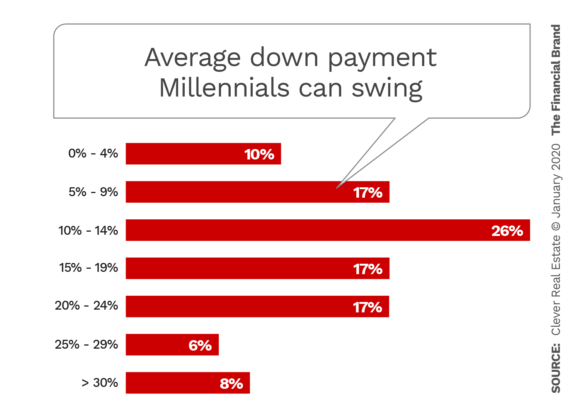 Whatever the size of the down payment Millennials can afford, the range of sources for that money is wide. Just under half say that personal savings will be the source of this money, according to Clever. Family-related sources combined account for just over a third of where Millennials expect to get their down payment. 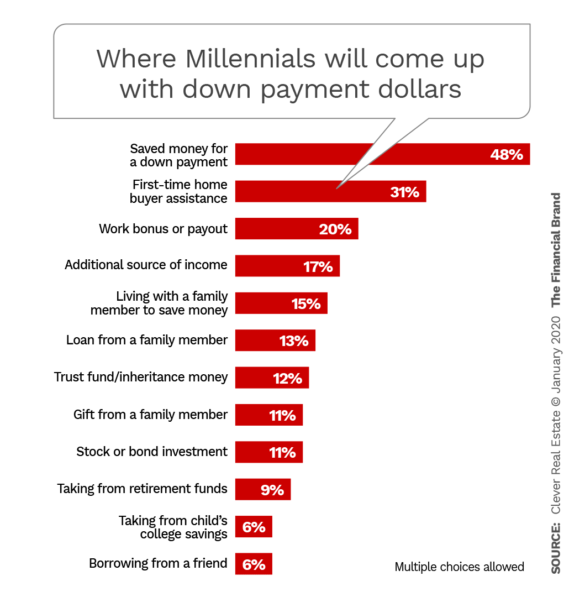 What Millennials Will Do for a House

Most Millennials’ parents owned a home and now that a large portion of this generation will be 30 or older, the desire to do likewise for those who haven’t taken the plunge grows increasingly strong. The Clever survey found that just over a third (34%) of the respondents said they are motivated to buy a home because they have or are planning to have a family. Even so, one out of five (21%) are willing to delay having a family in order to be able to own a home. 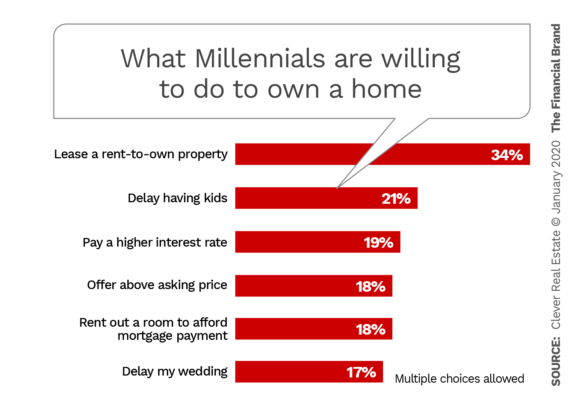 The survey found that just 30% of Millennials would balk at taking out a mortgage if interest rates rose over 4%, compared with about half of Baby Boomers who would say “no thanks.”

Beyond the steps indicated in the chart above, the research found that would-be Millennial homebuyers are willing to buy smaller homes (about 1,700 square feet), and would even go so far as to pay more for a foreclosed home or a home in less-attractive location than what the going price would be — just to have a shot at owning a house. In addition, one in five Millennials are willing to take on a side gig to help come up with a down payment, according to Clever.

Millennials increasingly are also buying homes outside of major metro areas, a trend likely to continue. Top Millennial home buying locations identified by SmartAsset in 2019 include Chesapeake, Va., Elk Grove, Calif. (a Sacramento suburb), Garland, Tex. (a Dallas suburb), and Warren, Mich. Clever points out that a typical home in Garland is listed around $224,250, compared with the Dallas median price of $379,000 from the same time period.

“The stereotype that Millennials primarily choose to buy homes and live in large metro areas isn’t the reality,” states Javier Vivas, Realtor.com’s Director of Economic Research. “Results show Millennials [are] more heavily conditioned by affordability than in prior years, so their eyes are set on less traditional secondary markets where homes and jobs are now available and plentiful.”

Not only are many Millennials still not financially prepared to buy a house, they face a knowledge gap. One of the more striking findings of the Clever Real Estate study was that nearly 60% of Millennials could not correctly answer the question: “What is interest?” Overall, they were able to correctly answer just 46% of the questions related to savings.

“The percentage of Millennials that wanted an in-person mortgage experience (52%) more than doubled the percentage that preferred an online mortgage process (22%).”
— LendEDU

Similarly, LendEDU’s 2019 study found that 55% of Millennials said that a lack of knowledge about mortgages and homeownership generally had prevented or delayed them from owning a home.

Strikingly, the LendEDU research found that “the percentage of Millennials that wanted an in-person mortgage experience (52%) more than doubled the percentage that preferred an online mortgage process (22%).” Further, 26% were undecided.

Even more dramatically, more than half (53%) of Millennials said they would prefer to deal with a traditional bank, versus just 8% who would prefer using a non-banking lender, with the remainder not sure. While it’s possible that people answer a survey question one way and act another — especially considering that non-bank mortgage lenders now hold slightly more than a 50% market share — nevertheless, there is great potential to tap.

If banks and credit unions can find ways to acceptably manage the higher risks, the data would seem to indicate that those lenders who are committed to the home lending business have an opportunity to play a major role in helping Millennials get into their first homes.