Subscribe Now Get The Financial Brand's FREE Email Newsletter
Gen Z grew up in the shadow of the Great Recession and they're trying to learn from the financial mistakes made by older generations, especially Millennials' debt woes. Banks and credit unions should be aware of Gen Z's debt shyness and adjust marketing and product planning to better meet the preferences of this big emerging segment.

Gen Z, the first true digital-native generation, lives in a world focused on social media platforms like Instagram and TikTok, which are both chock full of investing and money saving tips.

It also turns out they are wary of debt — in particular the kind of student loan debt that has saddled so many Millennials.

Student loans aren’t a big part of most financial institution portfolios. However, this fear of student debt could be indicative of a long-term aversion to debt of any kind. Over three-fourths of Gen Z (78%) are terrified of debt of any kind, according to research from marketing and payment consulting company Alliance Data.

So far the evidence is mixed. Three in ten members of Gen Z already have credit card balances and over one in four have student loan debt, as found by a NerdWallet and Harris Poll survey. It’s important to note, too, that at least half the members of this generation are still quite young. As of 2021, Gen Z ranges in age from 9 to 24.

Still, there are trends signaling a trajectory shift in this youngest banked generation — called “Zoomers” by some. The amount of credit card debt Gen Z is accumulating is far less than the generations who came before. For instance, while other age groups carry credit card balances in the multiple thousands of dollars, as shown in the chart below, Gen Z’s average credit card balance sits at just under $2,000, according to Experian. 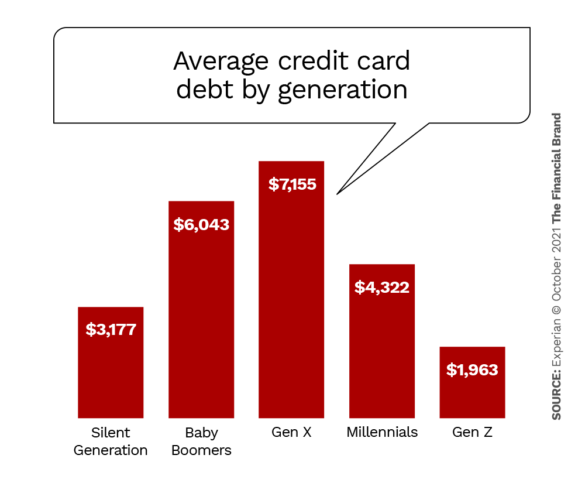 Look too at the payment forms they use the most. BAI found that Gen Z uses their debit cards and cash more than credit cards as a primary form of payment, even while Millennials, Gen X and Boomers all turn to credit cards first. 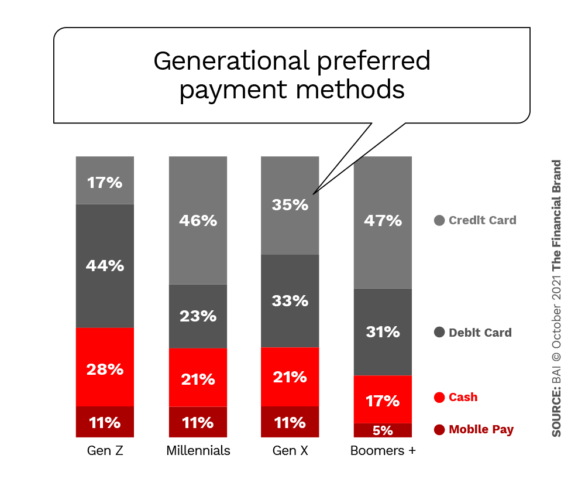 To nail the point home, GoCardless (in a survey of 1,000 American adults) reports that over three fourths (76%) of 18- to 24-year-olds say they plan to use a credit card much less than they did prior to the pandemic. (Nearly as many Millennials, 25 to 40-year olds, say the same, but, as noted, they have much higher average balances.) Similarly, Alliance found in their research that Gen Z is responsible with their finances — almost nine out of 10 (88%) save up for large purchases instead of resorting to loans.

“Gen Z is planning for the future more than most people give the younger generation credit for,” says Guy Troxler, Vice President of Loan Operations at VA Home Loan Centers.

BNPL and P2P are Big Draws for Gen Z

Financial institutions have been trying to narrow down the primary differences between Gen Z and the generations which came before to better design banking strategies to accommodate them. One of the biggest differentiators is how Gen Z perceives debt.

For instance, they have a strong attraction to fintechs and buy now, pay later (BNPL) offerings, both of which have gained traction amidst the revolution in payment technology.

Given the typical 0% interest rate, BNPL is an easy win for Gen Z. Insider Intelligence estimates that by the end of 2022, close to half (44%) of Gen Zers 14 and older will be using BNPL at least once a year, in comparison with 37% of Millennials. Similarly, GoCardless also found that over half of Gen Z (54%) would switch from traditional methods to P2P and social media apps to make payments.

Another draw of BNPL — specifically for these younger consumers — is the notion of financial flexibility. “These solutions provide younger consumers, whose cash flow tends to be more limited, with greater flexibility in payments, especially for larger-ticket items,” Insider Intelligence states.

Even though they do use credit cards, these new payment options — in addition to debit cards — are like a flame to the Gen Z moth. Beth Costa and Neeok Gardener at consulting company Oliver Wyman wrote in a report on how Gen Z pays that these young consumers like BNPL payment options primarily because they don’t think of it as credit and find instead that it keeps them from feeling indebted.

“They feel they are exercising good money management by choosing alternative payment solutions,” the authors state.

Getting Creative to Avoid Student Debt

Just because Gen Z is averse to student loan debt does not mean they are skipping college. More than four out of five (83%) of Gen Z either attended or plan to attend college or trade school, according to a TD Ameritrade survey. Granted, not even half of Gen Z are of college age yet and only the oldest are entering the post-college workforce.

Influenced by the crushing debt loads of Millennials, Gen Zers are changing how they go to school to avoid the same fate. For instance, almost one out of two (46%) of Gen Z respondents say they would take online classes, according to the TD Ameritrade survey. Another 36% said they would attend community college before moving on to four-year college and 31% said they would take a gap year between high school and college — “a decision that would let them earn money to help pay for college before enrolling,” the study report states.

In addition, having heard horror stories from Millennials who, when surveyed, say they would now work harder to earn money for college and avoid taking out so much in loans, Gen Z is taking that to heart. Almost half (48%) say they plan to work at least part-time during college in comparison with the 36% of Millennials who said they worked part-time jobs through college, according to TD Ameritrade’s study. And nearly half of Gen Z reported working during the summer during their college years, in comparison with only a quarter of Millennials.

Read More: Gen Z Says They’re Eager to Use Big Techs for Banking – But Will They?

A Red Flag To The Financial Industry

Gen Z is shy about credit card and student debt alike, but they still want a home of their own. One Bank of America report found that the majority of Gen Z (52%) say they already plan to own a house by age 30.

“Gen Z is planning for the future more than most people give the younger generation credit for.”
— Guy Troxler, VA Home Loan Centers

Of particular note for traditional financial institutions, however, is that this latest generation plans to be more prudent just like they are with other kinds of debt. Already older Gen Z consumers are pioneering a new solution for financing a house.

With so many of them forced by the Covid-19 pandemic to move back home with their parents (one Pew Research study pegged this at 52%), many realized that by continuing to live at home they could give up years of renting and reserve their paychecks for a house down the road.

“By channeling their would-be rent into savings, homeownership could be within reach,” says Forbes Senior Contributor Brenda Richardson.

Several college-age members of Gen Z that The Financial Brand spoke to informally said they fully plan to adopt this strategy of living at home long-term so they can save up money for a down payment.

By making adjustments now for these trends, banks and credit unions can capture more of the overall relationship with Gen Z as the generation continues to mature. A key theme financial institution marketers can work on is to connect with Gen Z by being genuine, according to customer experience company Hero Digital.

The company found that Gen Z is “more likely to choose a bank based on a trusted brand.” This can be seen in their trust in social media influencers, who advocate for brands they’ve tried. To win the trust of these younger customers, banks and credit unions, should try out similar strategies.