Subscribe Now Get The Financial Brand's FREE Email Newsletter
Mortgage marketers must adapt quickly to the new realities and business mix of a rapidly evolving industry. A coming shift to more adjustable-rate mortgages, for example, will require fresh perspectives.

The party is over in mortgage lending. The ballroom isn’t completely vacant, but there won’t be nearly as much dancing for a while.

Confirmation of that comes in announcements in June 2022 of layoffs in mortgage lending at JPMorgan Chase, First Guarantee Mortgage — which also filed for Chapter 11 bankruptcy protection — and others, as well as buyout offers earlier this year at the largest home lender, Rocket Mortgage.

Boom to bust swings are common in the mortgage lending business. However, the return of higher rates and inflation is a complete working life change for many lenders. It’s been rough on consumers, too.

“First-time homebuyers and others in the market have never been through anything like this. They’re losing buying power overnight,” says Derek Baker, Vice-President, Sales and Innovation at Mills Marketing, and a veteran banker. “With the market going weird, many don’t know where to turn.”

Baker notes that many of the lenders Mills Marketing works with have seen mortgage demand drop so much that dozens of lenders on staff are competing with each other as well as with other institutions for the handful of loans.

“There’s just not enough to go around,” says Baker.

The Economy Is Revamping the Mortgage Business

The ongoing changes in the mortgage market will drive shifts in the what, how and why of what financial marketers will be promoting for some time. Some consumers will be daunted by where rates and payments head and will do all they can to stay put.

Moody’s Investors Service notes that rising rates “are diminishing affordability for home buyers and cooling what had been a heated U.S. residential real estate market.” The company noted in its report that May 2022 new-home sales were down 17% from a peak in December 2021, and that existing-home sales were in their fourth month of decline.

Not so long ago in many markets selling a home was a slam-dunk. But now, according to Moody’s, “sales immediately following listings are slowing and price cuts are growing.”

Regarding pricing, Moody’s stated that there would be some appreciation for existing homes through to the end of 2023.

“After that, we expect home appreciation to settle in at levels somewhat lower than the rate of overall U.S. inflation,” the firm stated.

It added that a “minor correction” could be in the cards but that could be balanced by continuing undersupply of homes and other factors. On the other hand, it continued, a price drop could improve housing affordability for people who have been shut out by rising prices and rising interest rates.

Between now and the end of 2022, however, Fannie Mae believes rates and prices will keep many potential buyers out of the market. This is in spite of widespread reports of homeowners cutting their asking prices in hopes of snagging a buyer.

“For some potential movers, the prospect of giving up their current mortgage and taking on one with a rate that is nearly double their current one is enough to back out of the transaction.”

Realtor.com reported that the share of homes where owners reduced prices hit 14.9% in June 2022. That’s almost double the share reducing prices a year earlier (7.6%). Reductions were especially strong in the western states, according to the publication.

Read More: What Banks and Fintechs Must Do to Survive the Impending Recession

Just as consumers have had to get used to a major shift in mortgage markets, home lenders themselves have had to change their mindsets. This has taken some time to filter into many larger organizations’ marketing, says Andrew Davidson, SVP and Chief Insights Officer at Mintel. Much that has been out there still emphasized grabbing rates before they shot way up, he says. 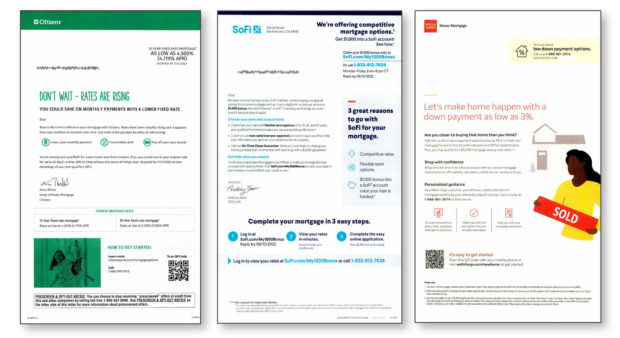 Davidson says one player that has adapted quickly to shifting conditions is Rocket Mortgage. Davidson says that Rocket, the nation’s largest mortgage lender, has been pushing the idea of prequalification in light of the tighter availability of homes for sale.

Rocket’s angle, he says, is for the consumer to feel, “I’m already pre-qualified through Rocket Mortgage so I can be the first to make an offer in this very competitive market.”

One change that has already started to be seen is a shift towards marketing home equity credit.

Davidson says banks and credit unions that decide to go after this business will find themselves competing with some fintechs as well as other traditional lenders. One is Figure, which uses blockchain technology to provide an entirely online application process, which it promises can shrink the timeframe to less than a week.

Two more are Aven and Hitch, which promote home equity lines that can be accessed using a credit card. Though not a first, historically, both offer a different take on the HELOC product in today’s market. 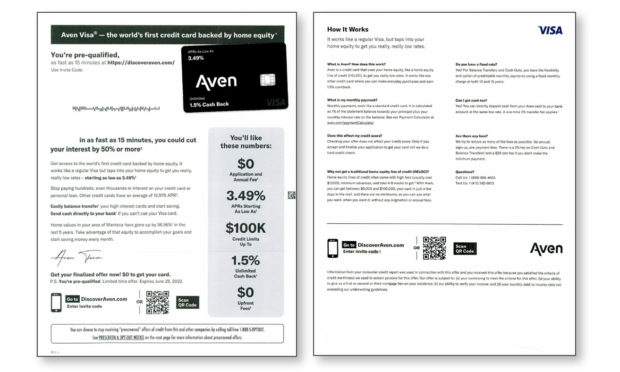 The industry may be on the cusp of shifting to promoting adjustable rate mortgages. Davidson hasn’t seen this in mass market promotions yet as he monitors ongoing additions to Mintel’s database.

Derek Baker of Mills Marketing says that several of the firm’s clients have simply stopped mass advertising of any mortgage products. This doesn’t mean that these community banks and credit unions aren’t doing something about marketing, however.

“Many of our clients say they are doubling down on education right now,” says Baker.

This takes multiple forms. In some cases it is as simple as spending more time one-on-one with customers and prospects, consulting with them in the midst of the mortgage market’s upheaval. Some institutions are reaching out via email to draw people to video webinars or live seminars to discuss new realities. More emphasis is being put on content marketing on websites, as well, to explain how the market is changing.

“It goes to the idea of being that trusted resource for consumers,” says Baker.

A key factor that needs explaining are adjustable rate mortgages. These have evolved over the years, so that even people with personal or family experience with ARMs may need some education if they decide to go ahead with a variable rate.

Baker says credit unions have been more aggressive about shifting towards ARMs than banks. Many are moving into ten-year ARMs. This has the appeal of a fixed-rate loan in the first decade of its existence and then shifts to a rate that’s adjusted annually.

ARMs have been available all along, but haven't been used much during the long low-rate period. Now they are being looked at, but with some trepidation.

“We have a younger demographic that’s been moving into homeownership from renting,” says Baker. “What they are hearing is that rates are moving and that they should look at ARMs. And their reaction is, ‘Wait, I don’t want my rate to move. I’ve always been taught I’m supposed to get a fixed-rate loan.”

Marketers have their work cut out for them, not only now but a few years off when rates stabilize, perhaps even drop.

“Then the lenders will have a huge pool of borrowers who want to refinance,” says Baker.

In the meantime, hard-nosed realists among the lenders he works with have to balance the desire to keep making loans against the widespread belief that home prices will be falling at some point. Baker says mortgage lenders he knows are challenging appraisals more aggressively than in the past — arguing against appraisals that come in too high, in their view.

“They’re not trying to make it harder to buy a home,” says Baker. Instead, they are trying to protect both the borrower and their institution from home values “that aren’t real.”