In many ways, the pandemic year played into the hands of digital-only banking providers, as has been said about a million times by now. But here’s a little glitch in that narrative that just popped out of some new data:

The size of the respective decline and increase was not huge, it’s true, but the fact that the trend line moved in opposite directions for the two groups tells an important story.

The swing was uncovered in consumer research conducted early in 2021 by J.D. Power for its 2021 U.S. Consumer Lending Satisfaction Study. The study concentrates on unsecured personal loans and home equity lines of credit. Both categories saw demand fall during 2020 as a result of the pandemic’s impact. In fact, the long-term decline in HELOC use accelerated to the point that both Chase and Wells Fargo suspended the product, notes Jim Houston, Managing Director of Consumer Lending for J.D. Power.

But consumers still borrowed, and those that did for the most part went online to do it. Houston says that even for those whose preference normally is to go to a branch to apply for a loan found the digital experience a net positive overall.

“The channel was not difficult overall and both the fintech and traditional lenders and had high scores for ease of use, as well as the navigation of both their websites and their mobile apps,” Houston tells The Financial Brand. However, that is just part of the story.

The study, like most J.D. Power satisfaction studies, ranks the major players on the basis of the company’s proprietary 1,000 point index. For 2021, the top four lenders in terms of overall satisfaction with their consumer lending programs were all traditional institutions: American Express, Discover, Citibank and U.S. Bank. The highest placed fintech lender — at fifth — was LendingClub Bank, now a fairly established player, and a bank holding company by virtue of its acquisition of Radius Bank in 2020.

The pandemic exposed some holes in the fintech model that caused their customer satisfaction to decline.

“The fintech lenders by and large weren’t used to customer service,” says Houston. As he explains, most of their service and loan management was built during the pre-pandemic lending period, where they had “everybody on autopay with no conversation.”

Traditional lenders had long ago built capabilities in that area. “That’s why you see lenders like American Express and Discover on top,” Houston states. “They built that customer interface on the credit card side and extended it over to the personal lending side.

The study revealed that from 2020 to 2021 overall satisfaction in personal loans and HELOCs rose for traditional lenders and fell for fintech lenders. 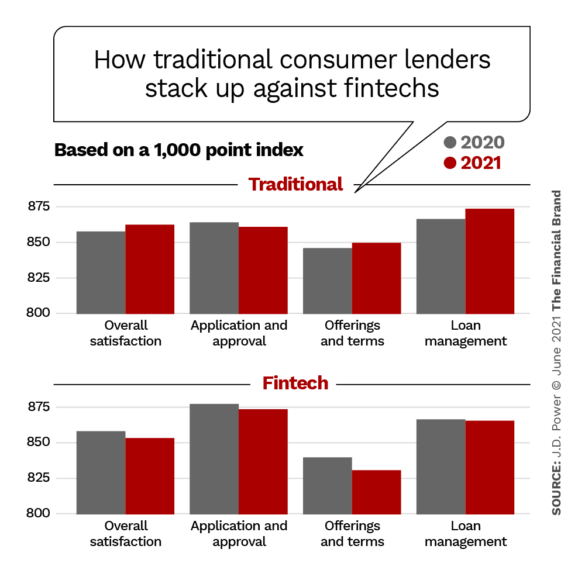 Fintechs still enjoy an advantage in the application and approval stage, where their tech platforms performed well, but in the areas of “offerings and terms” and “loan management” they were unable to respond the way traditional lenders did.

As the report states: An easy application gets people in, “but the post-sale will play a large role in determining whether the customer sticks with that lender.”

Satisfaction is Both an Opportunity and a Challenge

For traditional institutions, the gains in satisfaction due to post-sale support is an opportunity they can build on, says Houston. Especially since they are not that far behind in the ease of application and approval. The biggest institutions in particular have much the same technology capabilities now as the fintechs, the analyst states.

The degree of satisfaction reflected by consumers is crucial. Even a “pleased” personal loan customer (one of four satisfaction categories J.D. Power uses) is a toss-up in terms of future loyalty to the lender, the report states. However more than four in five (46%) “delighted” customers intend to use their lender again. They can also be reliably counted on to promote the lender, based on Net Promoter Scores, according to the report.

That’s important for future business, but satisfaction has a big impact in the present, as well. The percentage of customers who have other products with the lender rises steadily along with overall satisfaction with the personal lending product/process. 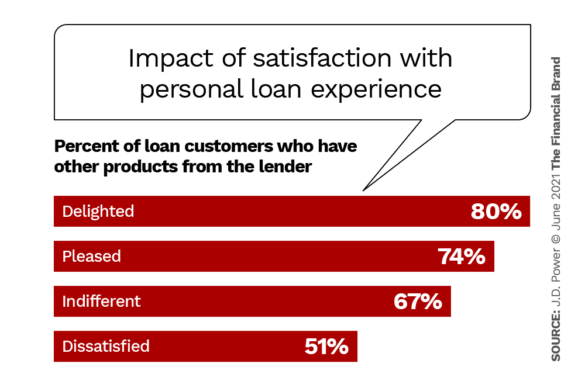 Houston sums up the message for fintech lenders this way: “You can build a model that is all about acquisition and then once you have them on your books continually try to relend to them. But, if you can’t service them in a downturn or whenever they have questions or issues, they’re not going to give you good publicity. You might retain that one customer, but you’re not going to get three more” from that interaction.

Communication Expertise Is a Plus

The survey confirmed that email, already the dominant channel for communication with loan customers, saw increased use during the pandemic year, among both traditional lenders and fintechs. This gave another edge to the incumbents.

As the report states: “When difficulties strike and clients need an extra bit of engagement, traditional lenders have a history of customer communication skills to fall back on which fintechs may not have.”

Adds Houston: “Those lenders who had a good email system tended to have higher satisfaction scores than those whose communications were strictly built around phone and text alerts.”

Looked at outside the context of pandemic-related communications, however, not all lenders — traditional or otherwise — are nailing customer contact. Here’s an example of why that Houston shared:

“You’d be surprised at the number of financial institution loan customers who are on autopay where the only way they know when the payment comes out of their account is when they see it on their bank statement. The lender doesn’t send them any other notification.”

Although the veteran consumer lending analyst sees no reason why traditional lenders can’t keep up with the fintech crowd, they shouldn’t be complacent. Service clearly is key, as the above findings show, but consumer lending, he believes, will continue to become more digitized and more personalized.

“Consumers are going to have a wide range of options to shop from, many of them online.”