Subscribe Now Get The Financial Brand's FREE Email Newsletter
Vehicle finance moves into 2021 with an industry that staged something of a comeback after coronavirus initially shut down auto production. Demand remains strong for cars, but a two-tier economy puts some potential buyers out of most mainstream lenders' reach.

Heading into 2021 the U.S. automotive market and its associated credit industry will likely continue to exhibit elements of a “have” and “have not” split as a result of a COVID-19 recession that some say is going through a “disparate recovery.” The geometrically inclined call this a “K-shaped” recovery, which produces two sub-economies, one where people maintain their income and are able to continue life somewhat as “normal,” and the other where income has shrunk or where the breadwinner is out of work and receiving government assistance or unemployment payments.

Sales of new cars rebounded somewhat in 2020 and that rebound will continue to influence the sales picture over the next few years, which affects much of the rest of the market. Some conditions that have been at work, such as lower gasoline prices in many parts of the country and extremely low lending rates that the Federal Reserve expects to continue for some time, will go on exerting an influence on auto sales and borrowing into 2021 and potentially beyond.

New technologies, chiefly the continuing development of electric cars, are having some influence on the picture ahead and there are indications that the incoming Biden administration’s policies will have various positive effects on the auto business. One idea that’s been floated is a reprise of an Obama-era program called “cash for clunkers,” designed to buy out ownership of older inefficient models with proceeds to be spent on new models.

In addition, the impact of expiring COVID unemployment programs at yearend and the wind down of credit relief programs remains a question mark, in the absence of a fresh federal aid package.

Outlook for Auto Sales in 2021 in U.S. More Upbeat Than Formerly.

“The need for new vehicles is vastly outpacing the number of people who are saying that they have a decreased need for a car.”
— Morgan Hansen, ALG

Fitch Ratings projects an improving outlook for the U.S. auto industry based on expectations for an improving economy in 2021. The ratings service expects 2021 light vehicle sales to total 15.6 million, up almost 10% from the projected total 14.2 million in 2020. The predicted level for 2021 is about 8% off 2019’s level and the firm does not expect sales to come back to that level until 2022 at the earliest.

In an analysis he went through during a webinar, Morgan Hansen, Vice-President, Data Science, at ALG, a part of J.D. Power, walked through the economic pushes and pulls on auto sales. He noted that while many more people are working from home now, and generally not needing to drive, there has also been an exodus from cities into the suburbs, creating the need for vehicles in households that hadn’t needed them before. That, and Americans’ strong desire for mobility, keep demand up.

“The need for new vehicles is vastly outpacing the number of people who are saying that they have a decreased need for a car. There is still going to be demand for vehicles in the U.S.,” says Hansen. “We are drivers.”

More broadly, the industry speaks of the impact of the “Vehicle Miles Traveled” metric and its influence on demand. Here also there is a combination of push and pull of COVID factors. In an analysis presented to an industry gathering, Kristin Dziczek, Vice-President at the Center for Automotive Research, pointed out that while more people are working at home, others are avoiding public transit and driving instead of flying.

Even the “scrappage rate,” the industry’s term for vehicles removed from service and registration, which had fallen at one point during 2020, is returning to normal levels. This factor, and an expected increase in the number of licensed drivers due to immigration and other population growth, will boost the demand for cars, according to Hansen. Low interest rates and manufacturer and dealer incentive programs, with accompanying reductions in monthly payments, are also playing a part.

“The impacts from COVID are cancelling each other out and we expect demand to return to a normal steady state within the next few years,” said Hansen.

The influence of the “K-shaped” recovery is also being seen. New car buyers tend to be of a higher economic strata in all times, said Hansen.

“They’ve had their lifestyle impacted but not their livelihood,” Hansen said. “People are out there buying because they can.”

“It’s clear that consumers who are purchasing vehicles right now are feeling quite secure in their financial position despite the pandemic. The discouraging unemployment numbers we’re seeing across the country likely aren’t reflective of the Americans in the new car market,” said Jessica Caldwell, Edmunds’ Executive Director of Insights. “New-car shoppers are putting down more money and taking advantage of continued low interest rates to upsize either to bigger vehicles or to vehicles with more amenities.”

Used Cars Had a Good Year, But Normality Is Returning

It was as basic as college Economics 101 supply and demand curves. When car manufacturing plants shut down at the outset of COVID-19 lockdowns, there was demand for vehicles that couldn’t be met with new vehicles.

The result was that used cars became more valuable both as something to buy in lieu of a newer car and for their trade-in value. In fall 2020 used car values began to retrench. They hit a high in September of an average of $16,411, falling to $15,874, according to Edmunds, which tracks vehicle pricing.

Factories had started reopening during the summer and have reportedly returned to pre-COVID-19 levels.

“After experiencing a remarkable surge over the past few months, used car values are finally cooling down now that some of the major supply issues faced by the industry are being addressed,” said Edmunds’ Jessica Caldwell. “While inventory is still tight in some areas, we’re expecting to see more lease returns make their way to the used market. This steady supply of near-new inventory will help address the increased demand we’ve been seeing in the market during COVID-19.”

Edmunds believes would-be used car buyers will be seeing a wider variety of potential purchases online and on dealer lots as more of those cars come onto the market. Already it is seeing average down payments on used cars rising, increasing to $3,306 in the third quarter of 2020 versus $2,937 in the second quarter and $2,636 a year ago.”

In a commentary, Charlie Chesbrough, senior economist at Cox Automotive, observed that a combination of improving production and somewhat slowing sales pace are enabling dealerships to restock.

“It’s hard to know if a robust sales pace will continue through December and into 2021 due to so many potential threats and unknowns facing new-vehicle buyers,” stated Cox Automotive. “However, with factories now operating close to pre-pandemic levels, production should not be the hurdle it was earlier in the year. The economic recovery is also continuing to show modest improvements, so there is little reason to expect that the vehicle market will make substantial changes to its current recovery path in the coming months.”

As stated at the beginning of this article, a two-tier auto economy continues to emerge. ALG’s Hansen noted that luxury car brands have actually been having a strong sales year in 2020. Experian has found that in the third quarter a pattern continued where a rising portion of car loans comes from prime and super-prime — a nine-year high. On the flip side, subprime applicants are getting car loans less frequently and deep subprime applicants have hit a record low, according to Melinda Zabritski, Experian’s Executive Director of Automotive Financial Solutions.

More of this will be coming in 2021, according to a forecast from TransUnion.

“We are forecasting robust origination activity, and barring any unforeseen shocks to the economy, we anticipate this growth will commence at the beginning of the second quarter of 2021 for most credit products,” says Matt Komos, Vice President of Research and Consulting at TransUnion. “Our forecast also sees a greater percentage of new loans going to lower-risk consumers, which we believe will benefit the overall serious delinquency picture.”

Overall, TransUnion believes the declines in vehicle lending activity throughout 2020 will flatten out in 2021, with auto loan originations rising in the first and second quarter by 6.8 million and 7.4 million new accounts, respectively, with a greater share of loans shifting to the prime and above tiers. 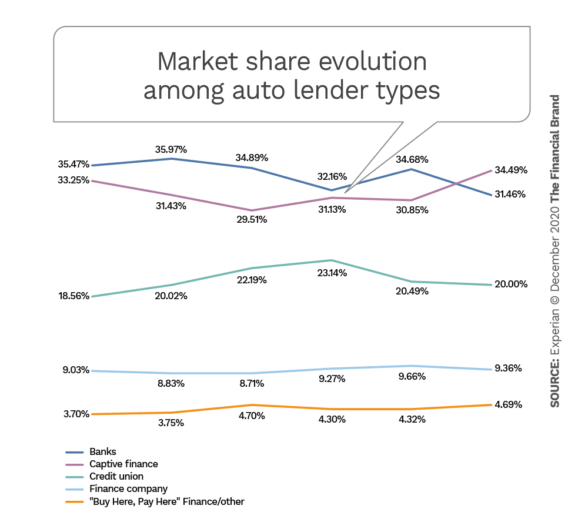 Overall, captive finance companies are continuing to capture additional market share from other lenders in 2020, reflecting in part their role of encouraging sales in troubled times. In 2020 they pulled ahead of banks, according to Experian’s third quarter figures, which had been the leading loan source prior to that.

Experian found that overall loan balances grew 2.8% year over year in the third quarter. Here is how lenders stacked up:

“The forecasted origination activity represents a fairly healthy rebound for the industry given the challenges seen in 2020,” says TransUnion’s Satyan Merchant, Senior Vice President and auto line of business leader. “As long as supply issues do not persist, auto loan originators should expect a steady 2021. Performance should also stabilize as auto accommodations continue to decline — currently representing 3.8% of auto loans. While consumers with a mortgage forbearance may impact auto loan delinquencies, we are anticipating this to be relatively small.”

Merchant notes that over the years the firm’s research has shown that, especially in a time of need, many consumers prioritize auto payments.

“Now, during the COVID-19 pandemic, it’s clear that many Americans will continue to value having access to a vehicle, as it is the lifeblood of many consumers,” says Merchant.

One fresh wrinkle, though, is that many consumers are valuing their homes moreso than before, in addition to their cars, because for many their home has also become their workplace, says TransUnion’s Matt Komos. Disruption on the home front would mean losing a place to work, for many.