Subscribe Now Get The Financial Brand's FREE Email Newsletter
As mainstream banks in the U.K. continue to avoid smaller residential developer loans, a fintech operating in P2P mode has been matching capital-hungry builders with retail investors who want something better than meager deposit interest rates.

Consumers have been engaged in a long and often frustrating search for yield, finding limited opportunities to get more than a paltry return on financial institution deposits. Money has been intermittently pouring into equities, but many people are also looking to diversify. This has challenged people worldwide, not just in the U.S.

A U.K. based fintech has been providing sophisticated consumers with an investment opportunity that pays between 8%-12%, depending on the deal. This is achieved through a classic form of peer-to-peer lending via the fintech’s platform that simultaneously helps fill a gap in commercial real estate finance in the U.K.

Blend Loan Network allows consumers to invest as little as 1,000 pounds (roughly $1,386) in single constructions loans to mid-sized and smaller developers. The company’s platform, launched in 2017, is both matchmaker and due diligence provider in the process of bringing higher returns to individual investors and expanded credit options to borrowers. The loans behind the investments average around 18 months and at most run 24 months.

The program began as an answer to a major ripple effect of the financial crisis of 2008-2009, according to Roxana Mohammadian-Molina, Chief Strategy Officer. In the wake of the crisis the U.K.’s traditional banks backed off from much of their lending to developers, especially smaller ones.

As the situation continued, alternative lenders began to look at this industry, one of them being Blend Network. “On the one hand, there were property developers who did not have access to funding,” says Mohammadian-Molina. “On the other, people with some money in the bank were receiving close to 0% interest on their deposits.” Peer-to-peer lending looked like a way to fulfill the needs of both groups, she explains.

“There’s a shortage of housing,” says Mohammadian-Molina, that the firm believes it can help solve. Since the platform launched, it has provided approximately 75 construction loans totaling roughly 28 million pounds. The rate on the loans has averaged 10.06%.

What Blend Network is doing amounts to breaking up the traditional bank model of funding and lending and reassembling the pieces in a fintech fashion.

How Platform for Matching Investors and Borrowers Works

Construction lending entails a degree of analysis and monitoring beyond many other forms of credit. Proceeds are not disbursed at once, typically. Instead, they are paid out as a project’s progress and the developer’s use of materials purchased with the loan are verified. Blended Network takes no financial stake in the project, but provides the upfront loan due diligence and ongoing monitoring that a traditional lender would provide. Once the internal team has vetted a loan it is teed up for the platform.

The firm offers portals for prospective borrowers and for prospective investors, who are called “lenders.” The lenders can invest any amount in a deal that they wish, so long as they meet the 1,000-pound threshold. Mohammadian-Molina says these investors tend to be doctors, lawyers, accountants and other professionals.

All investors have equal access to the documentation package on each credit, which is released 24 hours before a proposed loan goes live in the firm’s system for investment. People registered with Blend Network can invest deal by deal or can sign up for the firm’s Autolend program. In the latter the lender can specify the types of deals they want to invest in and the system will automatically seek such opportunities as new credits are listed.

Deals typically sell out in minutes once they go live and opportunities are first-come, first-served. This is why documentation is made available before the deal can be invested in.

As the concept has proven out, the company has been adding more professional staff to handle due diligence and to build the size of the loan book. Thus far the firm says there has been no bad debt. 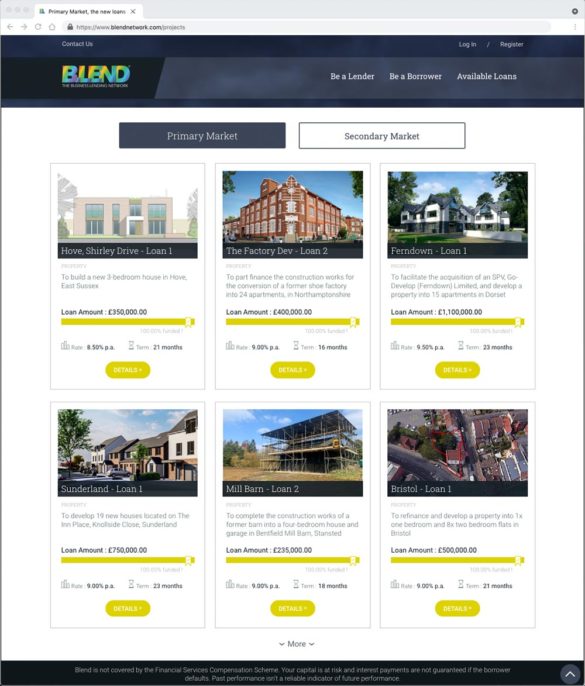 The P2P model Blend Network uses is similar to the way P2P originally worked on many platforms in the U.S. Later the American platforms tended to turn to institutional investors or even banks looking for investments, in place of individuals.

Each lender has a personal dashboard on the site which helps them track the investments on the platform, including when interest payments come due and when principal will come due. The firm uses emails to inform lenders of new developments on the dashboard and to let those not using Autolend know of upcoming opportunities.

During the registration process prospective lenders must take a short online quiz to demonstrate a basic understanding of higher-risk investing.

If they fail to answer all queries correctly they are guided to relevant background material and can take the quiz again. Mohammadian-Molina notes that the firm took this step voluntarily, to make sure investors understand that they are getting into something riskier than a deposit. The U.K. regulator, the Financial Conduct Authority, is in the midst of considering mandating such steps for all higher-risk investments, according to FTAdivser.

The platform is available to investors from other countries, but that all business is done in pounds.

Building on a Niche Opportunity

The potential market for this type of credit is estimated at between $25-$30 billion in the U.K., according to Mohammadian-Molina, so there should be plenty of opportunity without venturing into other types of credit. Thus far comparatively little marketing to potential lenders has been necessary, with interest in higher-yield opportunities leading to strong word-of-mouth promotion.

During the pandemic Blend Network initially saw a falloff in interest as people began pulling money out. However, Mohammadian-Molina says conditions stabilized sufficiently that demand for borrowing and lending both increased. This resulted in 2020 seeing a 104% increase in the loan book.

Part of what helps bring additional business to the platform is a U.K. program called the Bank Referral Scheme. The program, launched in 2016, requires the country’s top nine banks to pass small business loans that they have rejected to alternative lenders. (This is provided the prospective borrower has agreed to information sharing.)

Mohammadian-Molina says the company has picked up several loans this way. One that came from Barclays “was a great loan. The team of property developers had 60 years of experience between them and it was a great deal.”