Subscribe Now Get The Financial Brand's FREE Email Newsletter
Demand for consumer credit surges as the impact of interest rate increases and inflation hikes people's cost of living. One in three personal loan borrowers say they need the money to supplement lost income, which raises the question of a 'debt hangover' to come.

Additional data shows a significant minority of U.S. consumers is drawing down their savings accounts at the same time that a larger portion of Americans is adding to their savings.

Inflation has hit many people hard in the wallet and rising interest rates are causing pain, acknowledges Michele Raneri, Vice President of U.S. Research and Consulting at TransUnion. This has hurt some official measures of consumer confidence. But Raneri suggests that the rate of people quitting jobs to go to new jobs remains relatively high, and that should be considered.

“The ultimate act of confidence is leaving your job to go to a new one,” says Raneri. In August 2022 the federal government indicated little change in the “quits rate,” even as the massive number of job openings decreased.

Personal bankruptcy filings for the first half of 2022 were down nearly 15% from the same period in 2021, according to the Administrative Office of the U.S. Courts.

Many people are borrowing, some — especially Generation Zers with new credit cards — for the first time of significance in their adult lives. The growth in credit cards and unsecured personal loans in part comes from lenders more frequently making such credit available to non-prime consumers.

An additional growth factor: With the strong rise in home prices, home equity lending, notably home equity lines of credit, is also picking up. Home equity credit was up 22% year over year in the first quarter (the latest numbers available). TransUnion says that 80 million homeowners have tappable equity — 4.5 million of them having over $1 million in equity as of mid-2022. 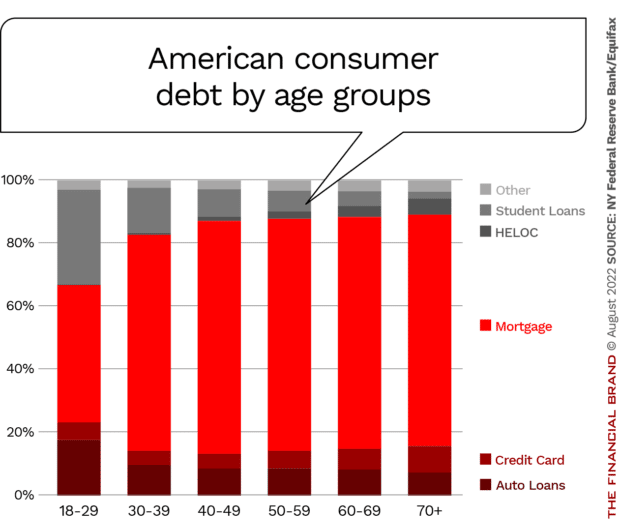 Total U.S. household debt rose by $312 billion in the second quarter of 2022, according to the Federal Reserve Bank of New York’s Quarterly Report on Household Debt and Credit. This 2% rise from the first quarter brings total consumer debt to $16.15 trillion, up by $2 trillion from the end of 2019, just before the pandemic hit. While delinquency rates rose for all types of consumer credit, the N.Y. Fed said they remained at historically low levels.

TransUnion characterized the increases in serious delinquency rates as a “normalization” to pre-pandemic levels, something that major banks’ executives have been predicting in analyst presentations during the first half of 2022.

What signals should lenders take from these broad trends? Raneri says that everything on the credit side of consumer lending indicates that banks and other lenders still have a green light to continue lending and growing outstandings. She says the yellow lights that exist concern the macroeconomic factors like jobs growth — which is slowing — that set the overall terms for borrowing.

The nation’s base of credit card holders grew by about 5% in the second quarter of 2022, compared to the same period in 2021. The average card debt held by borrowers increased by 9.4% year over year to $5,270. Average new account credit lines hit $5,035 in the second quarter, which is nearly 27% above the year-earlier figure. All of this comes from TransUnion.

To a degree these figures reflect the impact of rising prices.

Originations of credit card accounts rose by 26% in the first quarter of 2022 versus the first quarter of 2021. (TransUnion tracks this data one quarter in arrears.) But originations among Gen Z consumers rose by 31.6% in this period. Raneri says that this is seen as a positive for ongoing credit card lending growth because this generation is building their credit profiles for the future. It’s also a counterpoint to the widely-expressed idea that Gen Z is credit averse.

Serious credit card delinquencies — 90+ days past due — rose to 1.57%, but Raneri puts that in perspective, pointing out that in the first quarter of 2010, when the economy was still in a recovery phase, this metric hit 2.68%. “That gives a sense of what the magnitude could be,” says Raneri. The company doesn’t see present serious delinquencies anywhere near “concerning levels.”

The portion of cardholders who pay their balances in full each month has been holding steady at 36.3%, which is close to its all-time high. Revolvers, those who carry a balance, are at 40.1%, all according to the American Bankers Association Credit Card Monitor report for May 2022.

Personal Loans Grow and Become a Lifeline for Some

Fintech lenders reinvigorated the personal loan business in recent years by making it a more convenient option. Today unsecured personal loans are seen as as close as your keyboard or mobile device.

The growth seen in this type of lending can be considered in terms of a single player, LendingClub, now a bank after acquiring Radius Bank. LendingClub positions its personal loans as a way to retire more expensive credit card and other debt. In the second quarter of 2022 the company held an average of $2.7 billion in unsecured personal loans, reflecting major growth.

Growth by sheer number of personal loans is more dramatic. In the first quarter (this data is also measured in arrears by TransUnion) originations increased by 60%, with every credit tier increasing by at least 20%.

One note of caution from TransUnion concerns the increasing lending done with subprime borrowers. The company reported that serious delinquencies — 60-plus days past due for personal loans — have been rising for four quarters in a row. The 3.37% rate seen in the table below is up 47% from the second quarter of 2021. However, the company points out, this rate is still close to that seen prior to the pandemic — 3.14% in the second quarter of 2019.

As lenders look to continue to grow personal loans, TransUnion believes more lending will be possible to prime and better risks because of the continuing impact of inflation on consumer costs.

The “classic” use of personal loans today has been consolidation of debt, notably credit card bills, in order to bring down the overall interest rate. Research by J.D. Power found that one in five consumers surveyed have applied for personal loans in the last year. Out of that, 34% said that they did so to supplement lost wages.

The company found that people under 40 cited this reason most frequently — 39% of that age category said they borrowed to make up for lost income. 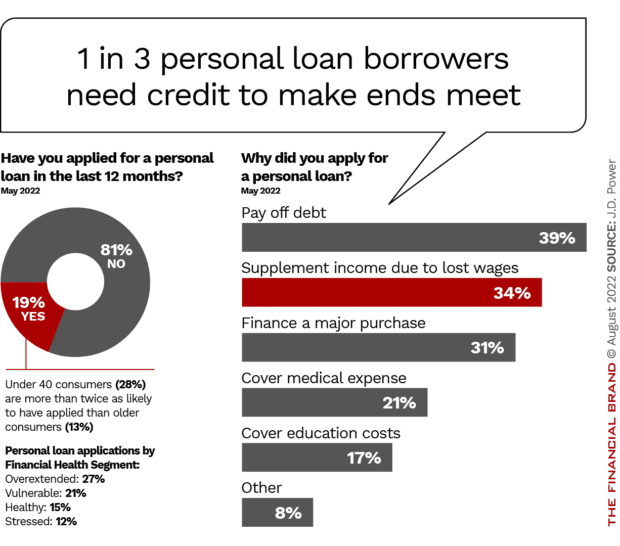 White says that 68% of people who receive personal loans say they are not in a better financial position than they were before. “That, to me, is sobering,” says White.

As stated earlier, much has been made about consumers’ stockpiled cash, but that backup isn’t there for everyone. Also, the rise in personal loans could indicate that for some people the savings accumulated during the pandemic is running low or has run out. MagnifyMoney, part of LendingTree, has been looking into savings rates. 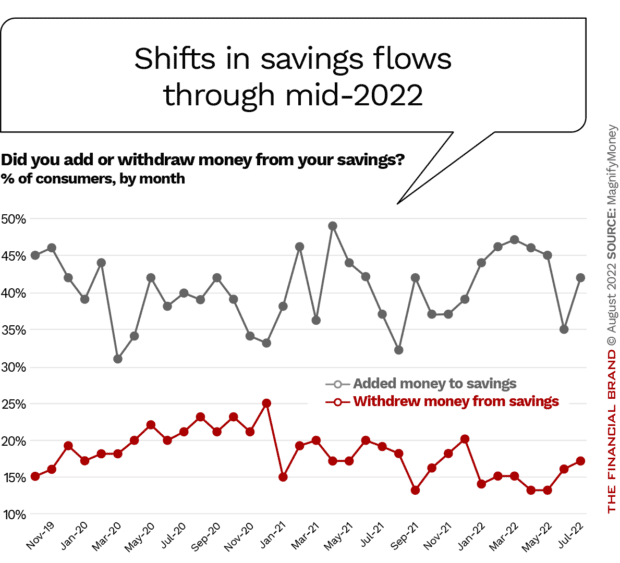 In June 2022, 42% of consumers surveyed said they had added to their savings accounts. The firm pointed out that this is the second-lowest percentage of net savers seen so far for the year.

“Consumers are starting to pull money from savings more frequently,” says MagnifyMoney. “In July, 17% of Americans say they withdrew funds from savings, the highest rate since December 2021.”