Subscribe Now Get The Financial Brand's FREE Email Newsletter
A major Federal Reserve survey provides a strong counterpoint to the theme that digital lenders outperformed banks and credit unions in serving needs of small businesses during the pandemic. The data also shows a clear advantage for incumbents in non-PPP lending to this large customer segment.

For much of 2020, the Paycheck Protection Program loan narrative ran this way: “Big banks stumbled, community institutions pulled out all the stops to help customers, fintech lenders wowed the crowd with slick tech.”

That came to be the accepted truth. Except it wasn’t — at least in one key respect. A massive survey of U.S. small businesses conducted by the Federal Reserve found that small businesses relied on large banks ($10 billion and up) and small banks far more than they did online or fintech lenders for PPP loans. Perhaps even more significantly, the same result holds true for non-emergency financing, covered later in this article.

Those findings were based on responses from nearly 10,000 owners of businesses ranging in size from one to 499 employees. The survey was fielded in September and October 2020. 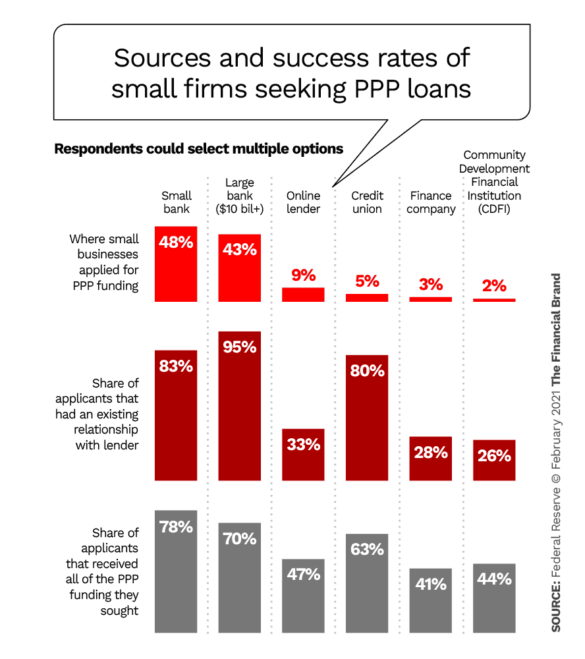 In addition to being the lenders of choice for small businesses, large and small banks, as well as credit unions, were far more likely to approve the full amount of the applicants than were online lenders or other participants in the PPP program, as shown above.

As indicated, the accepted narrative isn’t completely wrong. Several of the largest banks did stumble with their processing in the first PPP round, and they drew heat for giving priority to existing customers, which the chart reflects.

Fintech lenders, with far fewer clients, threw open the doors to pretty much anyone. However, in terms of overall satisfaction with the support they received during the pandemic from their primary financial services provider, the online and fintech lenders came in last. Community Development Financial Institutions and community banks scored much higher among small businesses, while the results for credit unions and large banks were mixed. 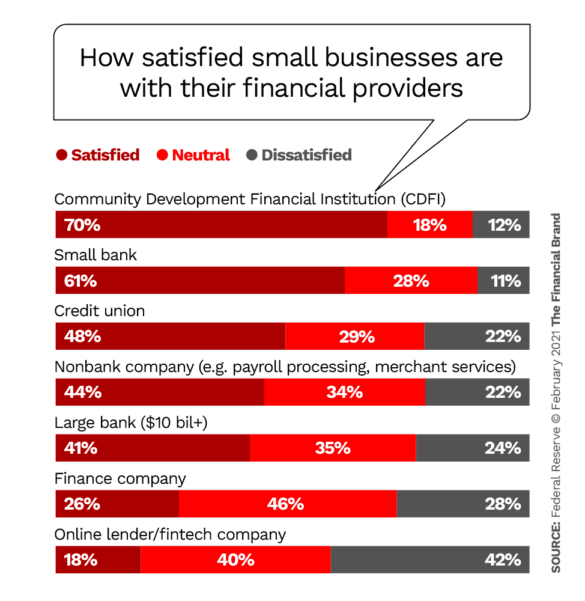 91% of small businesses applied for some type of emergency funding, and almost half of those requests were handled by small banks.

Fintech lenders often crow about how nimble they are, and how they make it simple for small firms to quickly get funds. That was likely true in some cases, certainly, as fintech lenders such as Kabbage racked up large PPP totals. As a Fed official observed, small businesses that themselves are digitally agile may have benefited from the fintechs’ outreach. However, for many businesses that are still heavily paper-based, a digital-only option, especially under the stress of a pandemic, was not necessarily easier. Such businesses often require the kind of hand-holding that traditional institutions provide.

In addition, small businesses with lower credit scores turned to online lenders and finance companies more often than traditional institutions, which could have been factored into the lower percentage of funds advanced.

In the ongoing battle for the small business loan market, the Fed’s 2021 Small Business Credit Survey uncovered a significant trend: For non-emergency loans — regular lines of credit and cash advances — both large and small banks gained share at the expense of online lenders from 2019 to 2020. As the chart below shows, the percentage of small businesses turning to such fintech lenders as Lending Club, OnDeck, CAN Capital, PayPal Working Capital and Kabbage dropped overall from 33% in 2019 to 20% in 2020. 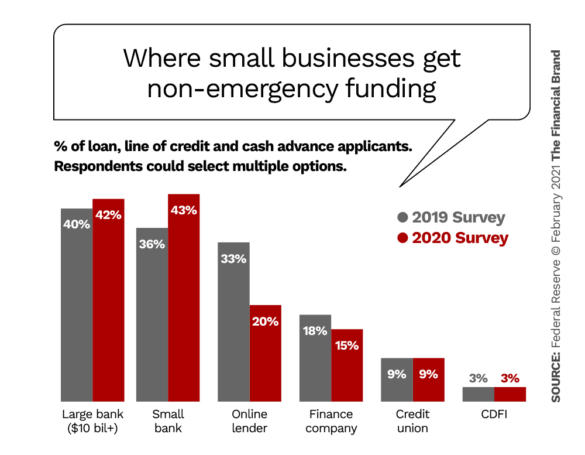 Not only did fewer small businesses apply for loans to fintech lenders in 2020, the fintechs’ satisfaction score was the lowest among the various small business lenders listed in the Fed survey.

Less than half (43%) of businesses approved for non-emergency financing from a fintech lender said they were satisfied with the experience, compared with 87% for credit unions and 81% for small banks. 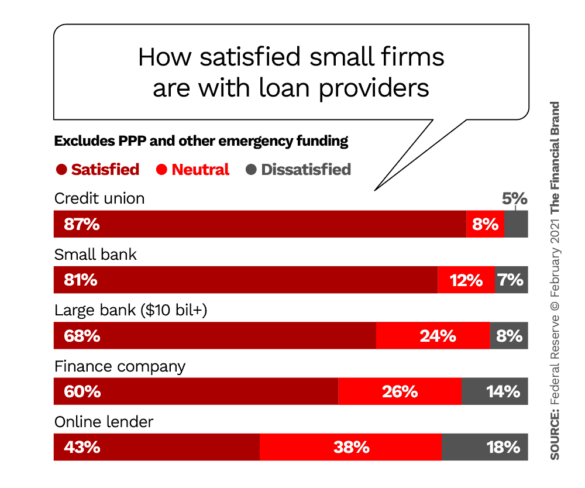 On a net basis in particular (“satisfied” minus “dissatisfied”) fintech lenders lost significant ground from 2019 to 2020, dropping from 37% to 25%, while credit unions and community banks stayed even year to year. Big banks moved up slightly on a net basis, the survey found.

To be sure, the percentage of small businesses that applied for non-emergency credit in 2020 fell sharply from 43% in 2019 to 37%. Loans to expand the business saw the biggest drop while loans to meet payroll and other operating expenses increased, but not enough to offset the overall decrease.

Further, the percentage of small businesses that received all the financing they sought in 2020 fell from 51% in 2019 to 37%. This measure contracted across all credit risk categories, but the impact was greatest in the high-risk segment.

Challenges Ahead for Small Businesses and Their Lenders

The Fed report covers the impact of the pandemic on the small business community at length. One telling statistic: The share of small firms that had experienced financial challenges in the prior 12 months rose from 66% to 80% from 2019 to 2020, and 57% reported their condition as “fair to poor.” The top two financial challenges were paying operating expenses (65%) and making payments on debt (44%).

For the first time in five years, more small business owners predict a decline in revenue for the next 12 months (41%) than predict an increase (40%).

Looking ahead, just over a third (37%) of small businesses expect that the single most important pandemic-related challenge in 2021 will be weak demand, followed by “government mandated restrictions or closures” (26%) and “credit availability” (13%). For Black-owned businesses, however, credit availability was the top challenge.

Although the Fed study was conducted in early fall 2020, and there have been positive developments since then, notably the beginning of the rollout of COVID vaccines, a U.S. Census Bureau study conducted in December found that just over half of small business owners (53%) didn’t expect a return to pre-COVID operations for at least six months.

As part of the government’s response to that situation, another round of PPP lending was launched at the start of the new year. As of Feb. 21, $140.3 billion had been disbursed, according to American Action Forum’s PPP tracker.

In terms of serving the overall financial needs — not just lending — of small businesses, traditional financial institutions still retain a dominant position in the U.S., as indicated by the percentages in the chart below. 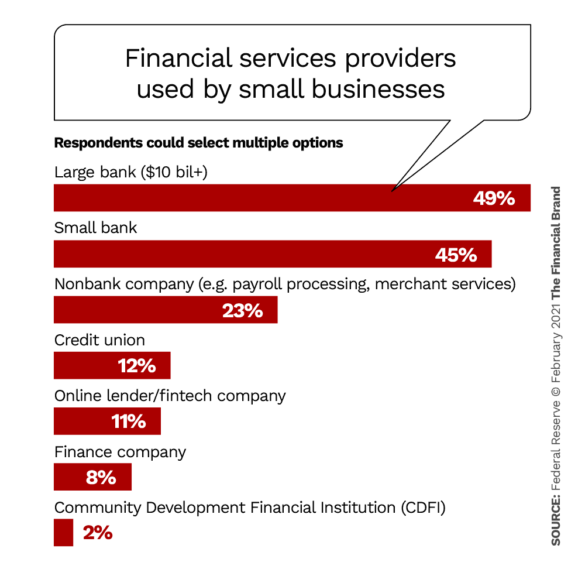 The pandemic period helped solidify the strong position incumbents over the many fintech companies competing aggressively in the small business market. That advantage could prove fleeting, however, once economic growth accelerates in the small business market, if banks and credit unions don’t continue their push to upgrade and modernize their thinking, processes and customer experience.