Subscribe Now Get The Financial Brand's FREE Email Newsletter
TransUnion projects that auto lending will rise in 2023, but so will delinquencies, amid a likely recession. At least one major auto lender, Capital One, is already pulling back, but mostly because of competitive pressure on pricing, not deteriorating credit quality, according to CEO Richard Fairbank. He shared details on his tactical thinking about the market trends.

Originations across most types of consumer loans will experience slower growth in the coming year — but auto lending is an exception.

The credit bureau projects that auto loan originations will increase 4.6% from the 2022 total, with the growth chiefly happening in the second half of 2023. (Originations shrank by 5.9% in 2022, compared with the previous year.)

With constraints in the supply chain easing and the production of new cars picking up, the inventory of cars available to buy will begin to bounce back in 2023, TransUnion says.

Many consumers had put off car purchases through the pandemic disruption that kept inventory low and sent prices soaring.

But car prices will ease, as a mild recession takes hold, and pent-up demand will kick in, according to a separate 2023 outlook from the credit-rating agency Fitch. 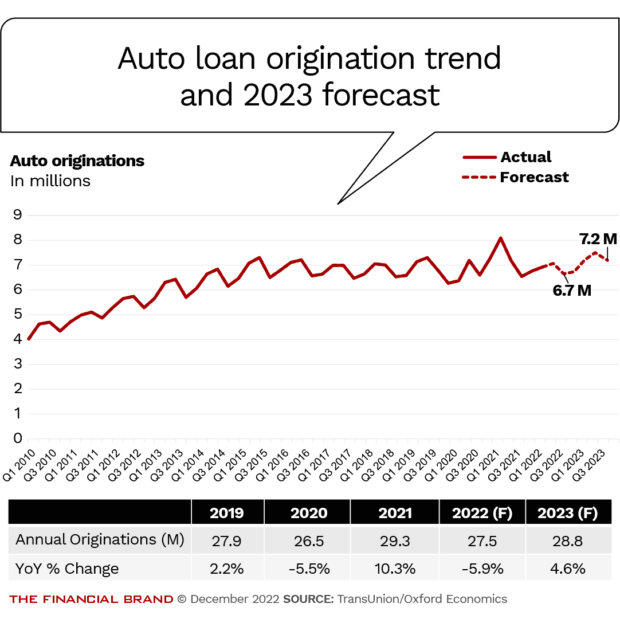 What About Auto Delinquencies?

Delinquencies are rising for auto loans, based on TransUnion data.

But at least one major auto lender says the delinquencies so far are not as much of an issue as competitive trends in the sector. This lender also anticipates auto will be a relatively resilient category overall.

“In the Great Recession auto was one of the first canaries in the coal mine,” Richard Fairbank, chairman and chief executive at Capital One, said during a fireside chat at a December 2022 Goldman Sachs conference. “It was one of the first areas where worsening showed up in the credit marketplace.”

Yet in the end the auto category performed fairly well. People prioritized car payments because they needed to get to work, he said. Some borrowers even put car loans ahead of their mortgages.

Many lenders exited the auto market back then, but Fairbank said he doubts that will happen in the recession that appears to be coming.

“Some of the factors that make auto resilient will be there again” — just not quite as resilient as the last time around — he said.

Capital One did pull back on auto lending in the second quarter and continued to do so in the third quarter, but not because of delinquencies. Fairbank attributed the move to aggressive pricing from credit unions and other lenders that made auto loans less profitable, even as interest rates rose.

TransUnion expects auto delinquencies to peak in the final quarter of 2022 and then persist at an elevated level through 2023.

After that peak, the credit bureau projects that delinquencies will edge down slightly in subsequent quarters to finish 2023 at 1.9%.

TransUnion says it expects delinquencies to rise across all types of lending categories in 2023, as insufficient growth in wages and potential job cuts to control expenses begin to bite.

Other sectors of consumer credit, including bank cards, private label cards and unsecured personal loans, are all experiencing an uptick in delinquencies, though to a moderate degree. 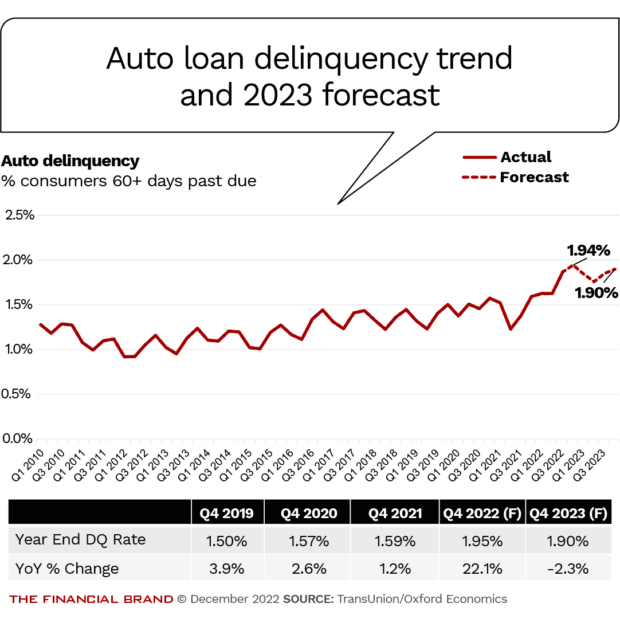 What Worries Capital One About Auto Lending

Fairbank said he continues to view auto lending as an opportunity, but Capital One intends to hold out for better pricing dynamics. In the third quarter, its originations declined 28% from a year earlier and 20% from the linked quarter.

“The elephant in the room is really the pricing of auto loans at this point by a number of players. And while that is not directly a credit concern, it lowers the margin in the business, it lowers the buffer of resilience, and so on,” Fairbank said during the company’s third-quarter earnings call. “We manage very carefully in trying to keep a maximum amount of resilience in downturns, and lower margins lead us to pull back.”

Another pricing issue also makes Fairbank cautious. Capital One has been financing more new cars than used cars lately, he said at the December conference. But a factor tempering this shift is what Fairbank described as the “whopping prices” being charged for new vehicles. The level of some vehicle prices poses more credit exposure than Capital One wants to take.

The company has seen an increase in auto loans that are past due, but characterized this trend as a return to normal. “The rate at which it’s normalizing is, frankly, more gradual than we generally expected,” Fairbank said on the earnings call.

What’s Ahead for the Auto Industry

Fitch is anticipating a mild U.S. recession in 2023, and it expects companies in the auto sector to hold up well. It says the auto industry is in a much different position than during the last two downturns.

Despite strong demand from consumers, industry production volumes have approximated recessionary levels for the past two years, due to Covid-19 mitigation measures and component shortages. North American auto production was 15% below comparable 2019 levels for the nine months ended Sept. 30, 2022. And U.S. dealers had only 32 days’ supply of inventory at Sept. 30 vs. 66 days at the same point in 2019.

But it cites several factors that should prevent sharp discounting and incentives. Three years of underproduction have created a high level of pent-up demand from car buyers awaiting improved conditions. As pricing moderates, these consumers may re-enter the market, supporting sales volume. This shift could also make vehicle sales more recession resistant.