Subscribe Now Get The Financial Brand's FREE Email Newsletter
Mobile banking technology means Gen Z can easily stick with their first banking relationship when they go to college or move. Most bank with the majors, but two out of five would love to try out a transaction account from Amazon, Google or a fintech provider. Financial marketers must reach out to this generation right now or their window of opportunity may slam shut forever.

Time is running out for many traditional financial institutions to begin attracting Generation Z consumers. In fact, for many credit unions and community banks the alarm is already buzzing and there’s no snooze button. Even financial institutions that presently enjoy a market share advantage among Gen Z stand an increasing chance of losing that share to potential nontraditional competitors among a significant portion of these young consumers.

These warnings come in a report by Raddon Research based on a sample of almost 3,000 of the middle slice of America’s Generation Z, those 16 to 19 years old. Generation Z as a whole consists of consumers born from 1997 on, which includes young people finishing college or already joining the workforce.

Some findings of the study are positive for traditional institutions — there’s a strong interest in branches, for example, among younger Gen Zers. But overall there is much more to worry about than feel comforted by. Such fundamentals as how to have a profitable relationship with Generation Z may differ markedly even from the experience with Millennials.

Raddon’s study delves deeper into this generation than other studies do. The research considers not only trends across the demographic group, but also breaks it into three subsets based on their attitudes about banking providers. These are:

Note this: When Raddon performed similar research in 2017, among people who were then 16-19, the three groups were roughly equal in size. The Disruptor and Digital groups increased the most at the expense of the Conventionals.

“In just two years, disruptor companies have made significant strides so that more members of Gen Z are willing to consider them as viable alternatives to traditional financial institutions,” the report states. Given that all Gen Zers live on their smartphones, this evolution will likely continue as more of them grow up.

Most of these Gen Zers are the sons and daughters of Gen X, in many ways a forgotten generation among marketers. This plays into an already troubling movement, according to Andrew Vahrenkamp, Senior Research Analyst and Program Manager at Raddon.

While some community banks have notably reinvented themselves, adding major new technology or finding fresh niches, “many have not kept up” with what consumers want, says Vahrenkamp. Many have concentrated on commercial real estate and commercial lending, and they’ve tended to regard younger consumers as a funding source for the business side, he explains.

These consumers haven’t been sitting still waiting for community banks to catch up, and their top source of information about money and finance are their parents and other family members. Although Gen Z does a lot of living on social media, especially Instagram and YouTube, social ranks far down the line for learning about banking. 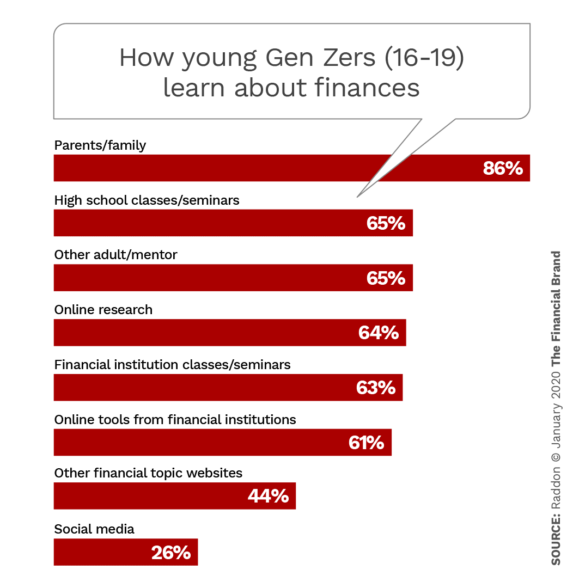 “They are much more open to disruption,” says Vahrenkamp.

As shown in the chart below, major banks dominate share among these Gen Z consumers. Only 5.5% of Disruptors bank with community banks and only 14% with credit unions. Even among the Conventionals, only one in ten choose community banks. 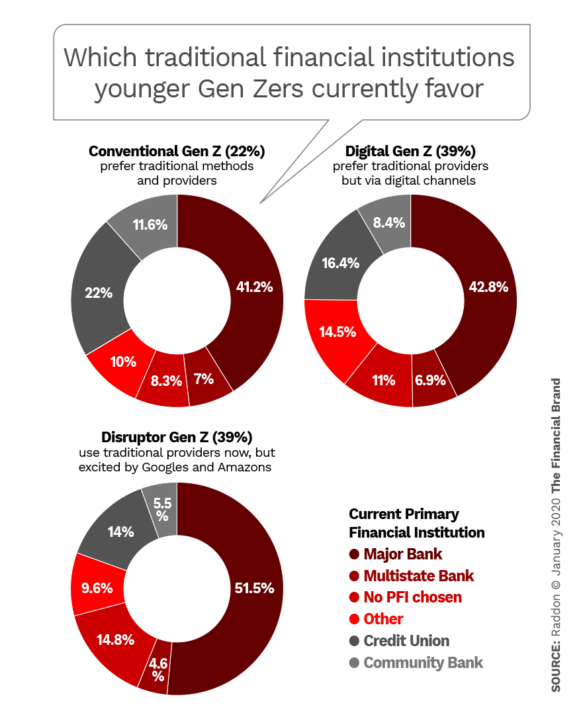 While all the above would appear to stack the odds for the largest banks, there’s more to the picture.

Vahrenkamp explains that there is a huge “first-mover” advantage in marketing to Generation Z consumers.

Classically, he says, the bank or credit union in a consumer’s current market enjoyed a strong geographic pull on consumers. Financial marketers didn’t worry about high schoolers’ accounts because they had the parents’ business and the students usually banked where the parent did.

When someone went off to college, they likely opened an account with an institution in the school’s community or affiliated with the school. The necessity for having a local banking connection was strong, especially when cash spending was critically important for everyday needs. When the student completed school, their local banking connection had a shot at holding onto some of their business. In part that was due to services like direct deposit and ubiquitous access to ATMs.

But the advent of mobile banking and mobile payments has changed things completely, according to Vahrenkamp. Now a student going off to school has no reason to change their bank or credit union — they’ve got it right there on their phone. Cash isn’t so much an issue anymore. So they stick with the bank or credit union they started with.

“The experience of the past no longer applies,” says Vahrenkamp. “Mobile banking means there’s no need to shift.”

This means a credit union or community bank could very well gain a Gen Z consumer’s trust and interest, if they move on it.

The implication: If you haven’t built a relationship with Gen Z by the time they leave home for college, you may have missed the bus. “You have less time to land this generation,” says Vahrenkamp.” As already noted, the largest percentage of 16-19 year-olds already bank with a major financial institution.

Raddon warns traditional providers not to be misled by Gen Z’s current level of mobile banking usage, which came in at 37% in the study, versus 76% for Millennials. The report points out that many of the younger Gen Z consumers aren’t supporting themselves yet, so they just don’t need to bank as often. The 19 year olds surveyed make more use of mobile banking, at 53%. Raddon expects that they will use the channel more as they grow older and more independent.

In addition, mobile payments are being adopted faster by Gen Z. In the current survey 41% of all Gen Z respondents used mobile payments — up 14 percentage points from 2017. Gen Z Disruptors hit 54% usage, and even 28% of Conventionals use mobile payments.

In one sense, mobile banking and payments creates greater inertia favoring a consumer’s present financial services provider. However, opposing that inertia is Gen Z consumers’ interest in what nontraditional players can offer. None of them think of Amazon as a former bookstore and Google as just a search engine.

Financial marketers have to steep themselves in what Gen Z finds “normal” versus what they knew in their own youth. For example, Gen Z has been growing up with Starbucks and Walmart payment apps and P2P channels such as Venmo and Zelle.

Beyond these channels, Gen Z proves to be very open to what newcomers come up with. Interestingly, even the most enthusiastic of these consumers seem to still see a key role for traditional institutions. While Gen Z Disruptors are very excited about what Google, Amazon and others may come up with, three out of five say they will stick to traditional institutions. On the other hand, 66% of Disruptors say they would consider supplementing their traditional accounts with offerings from newcomer providers. 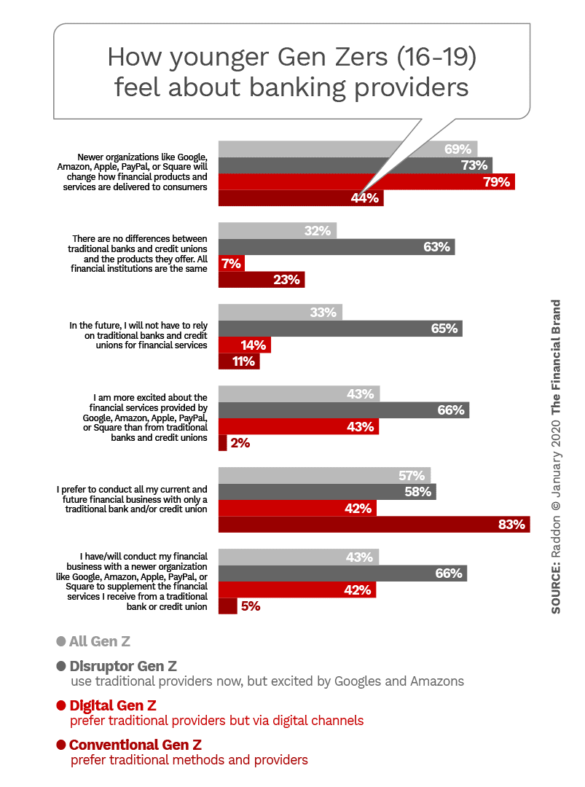 The tendency to be traditional while supplementing with newcomer offerings can be seen in the first and third bar chart groups in the following exhibit. 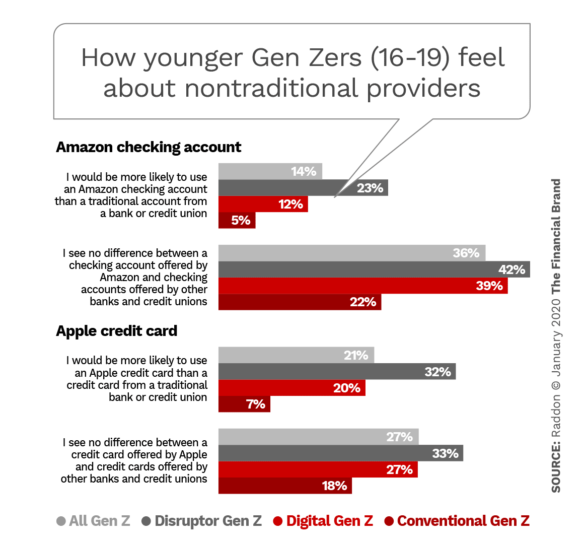 In the case of both a theoretical Amazon checking account and the actual Apple Credit Card only a portion of Gen Zers say they would prefer it to a traditional institution’s product. However, the data show that consumers tend to equate newcomer and bank offerings.

The Raddon report states: “It appears that, at least with this younger generation, Apple has made a seamless transition into the financial services sphere to the point that these young consumers don’t see a difference between a traditional credit card and a credit card offered by a company that has previously only been known for its products in the technology space.”

Are the findings in these charts cause for comfort? Or are they a crack that will grow wider? The youngest Gen Z consumers are about ten years old now. Those young Zs mean many consumers who will be exposed to nonfinancial providers’ messages. Even among the survey’s universe, 43% of all Gen Zers agreed that “Google and others will supplement the financial services from banks or credit unions.” And 33% agreed with “In the future, I will not have to rely on banks for financial services.”

How this plays out will be critical for at least the earliest days of the relationship between banks and credit unions with Gen Z, in terms of profitability. The study makes it clear that they use little credit, thus far, and Raddon thinks when they do borrow significantly, it will be later in life. They favor transaction accounts that make it impossible for them to overdraw.

“Overall, they are even more financially conservative than Millennials,” says Vahrenkamp. For the foreseeable future, he says, the chief way of making money from Gen Z, for traditional institutions, will be payments-related earnings.

Branches, Yes. But Not Their Parents’ Branches

More than any other rite of passage, to Gen Z, “the key to adulthood is financial independence,” according to Vahrenkamp. They are devoted to saving money, even with retirement in mind, and they know that there is much about money that they don’t know.

But while they still lean on family and friends for such knowledge, as illustrated earlier, they will also accept knowledge from other sources, even beyond social media and the web in general. Vahrenkamp says short videos are ideal, playing into their tendency to learn via video.

Another place that they’ll seek out advice are the branches of banks and credit unions. 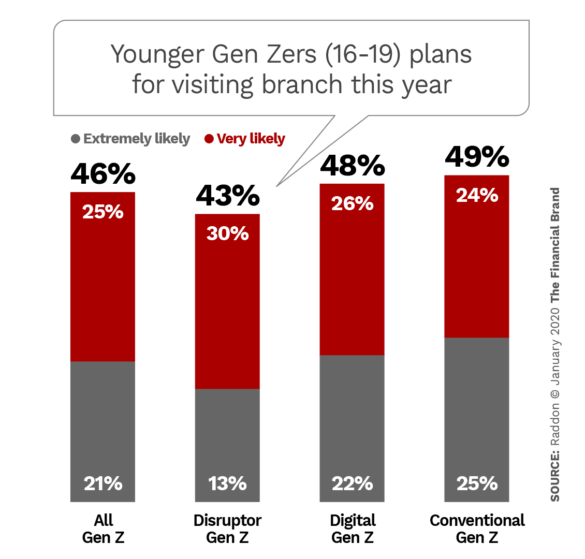 When these consumers wish to meet with a representative at a branch it’s much more likely to be to open a new account or a loan (47%), while using a branch for a transaction is of minimal interest (11%).

Face to face contact will help overcome a skepticism about financial matters that Gen Z almost seems born with.

However, for branches to play a part, they’ll have to be reimagined in a way that makes the most of their ability to bring those who would learn together with those qualified to teach.

In fact, it’s already becoming clear that mobile, when it is free of friction, replaces everything else for them that doesn’t require a human.

“They don’t use laptops for anything and they don’t use ATMs,” says Vahrenkamp. “For Gen Z, those are legacy channels.” Successful retail bankers, he says, will focus on improving the branch experience and the mobile experience.