Mobile banking and debit cards will play an increasingly significant role in Americans’ financial lives, that is if Generation Z has anything to say about it. According to the 2015 TD Bank Checking Experience Index, an annual survey of 1,500 Americans, nearly three quarters (74%) of these budding financial consumers describe their debit card as “essential,” compared to 56% of Americans overall.

(Note: In its study, TD Bank defined Gen Z as those aged 17 – 20 years old. While younger Americans also make up this generation, they were not included in the survey.)

41% of these budding financial consumers consider their banking provider’s mobile app as “essential,” whereas only 22% of other respondents in the survey feel the same way. Over half (53%) say they use their mobile banking app to check their account balances vs. 21% of all consumers. 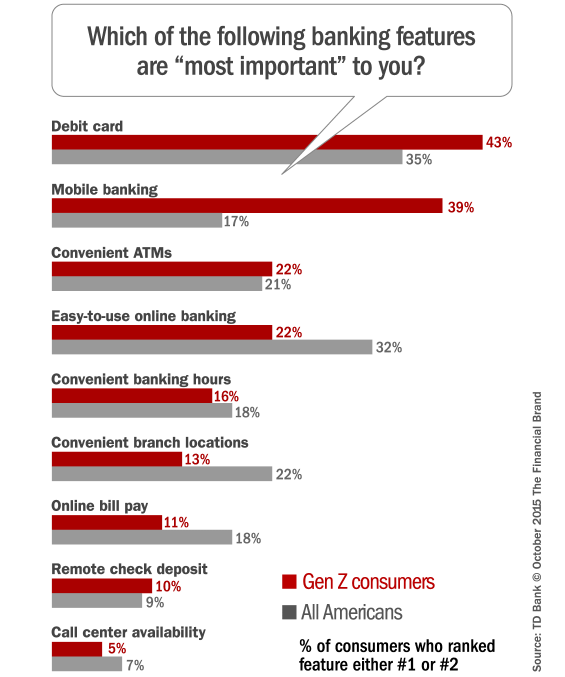 This echoes the results in a similar study fielded by J.D. Power in early 2015, which found Gen Z customers were utilizing mobile banking at a higher rate (38%) than other generational groups whose collective usage of mobile banking averaged 19%. Gen Z also uses mobile more frequently than other groups, at a rate of 48 times per year vs. 39 times per year for other generations.

Interestingly, Gen Z doesn’t see much point in utilizing both mobile and online banking channels — mobile-only will good enough for many of them. Out of all respondents in the TD study, one in three said that an online banking system that was easy to use was one of their primary concerns. This number drops significantly down to one in five among Gen Z consumers. This clearly indicates that among Gen Z, digital interactions are shifting from websites to mobile. Similarly, Gen Z places less importance on branches and call centers.

“The findings about Gen Z in this study validate the growing significance of the mobile channel, and suggest that it will become increasingly valuable to consumers and remain a top priority for banks,” said Ryan Bailey, a spokesperson for TD Bank.

Read More: Gen Z and The Future of Money

Gen Z vs. Millennials: How Different Can They Be?

The study from TD Bank examined the habits and preferences of Gen Z and how they compare to Millennials, which revealed some stark contrasts between the two generational segments. 39% of Gen Z respondents ranked mobile banking as a top day-to-day banking service or feature, compared to only 17% of overall Americans and 32% of Millennials. Obviously younger consumers are going to have higher expectations and more experience in the mobile banking channel; they won’t be able to imagine banking any other way.

“Financial institutions can expect Gen Z’s preferences to be similar to those of Millennials,” notes Nikki Waters, VP of Consumer Marketing at Fiserv. “But Gen Z’s tolerance for financial institutions that don’t grasp their need for fast, easy, intuitive and personally relevant communications will be very low.” 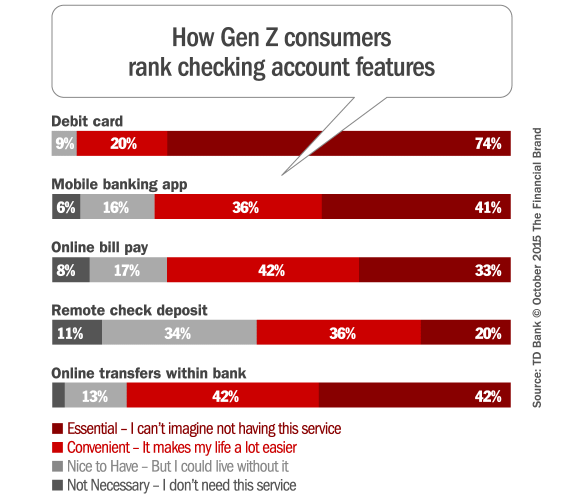 Overall Gen Z consumers seem pleased with their primary checking provider. 82% say they are either “very satisfied” or “extremely satisfied” with their day-to-day banking experience. Furthermore, 93% of Gen Z respondents rated their banks’ debit offerings as either “excellent” or “very good,” compared to just 84% of overall Americans and 88% of Millennials. This is important because debit cards are their preferred method for day-to-day purchases.

These results suggest that Gen Z might lack perspective or a frame of reference to compare and evaluate their banking providers — do they know any better? Perhaps they will become more finicky and critical as they mature and interact with more financial institutions.

But the findings in TD Bank’s survey suggest trouble could be on the horizon for banks and credit unions. If Gen Z consumers find nothing wrong with the banking provider where they establish their first checking relationship, they might become locked in — why switch? Financial institutions that target Gen Z successfully could wind up big winners, while other banks and credit unions find themselves sidelined, wondering how they will ever pry these consumers from their competitors’ clutches.

According to data from J.D. Power, Gen Z consumers have higher levels of overall satisfaction with big banks than they do with midsize, regional and community-based institutions — across a range of factors spanning mobile, ATMs, branches, and online.

Jim Miller, Senior Director of Banking at J.D. Power, says this competitive threat — particularly in the mobile channel — is very real: “Midsize and regional financial institutions risk losing Gen Z customers to the big banks if they can’t meet their needs and expectations regarding digital interactions.”