Subscribe Now Get The Financial Brand's FREE Email Newsletter
Nearly three quarters of younger consumers would use a single bank or credit union if they could find one that met all their needs, according to new data. Personalized digital services are a key, but so are innovative and imaginative new offerings ... and trust. Shed the 'stodgy' products, practices and image and these consumers could be yours.

Several well-informed banking experts have noted that while consumers tend to keep their primary banking account with a traditional institution, they have increasingly been opening secondary accounts with fintechs and other nontraditional players. This trend powered the rise of challenger banks like Chime and Varo Money and fintech apps like Mint, Dave, SoFi and Venmo. And it has drawn the attention and involvement of the “‘big techs” — Google, Apple, Facebook and Amazon.

More than three of five U.S. consumers (62%) have accounts or financial products at two or more financial institutions (with about half of that using two), according to a survey of almost 1,200 consumers conducted by software provider Zafin. As the chart below shows, the consumer’s age makes a big difference. The survey results were split into three generational segments: Gen Z, Millennials and 50 or older. The segments most likely to have multiple relationships were the Millennial and 50-plus groups. 13% of the older consumers had five or more relationships compared with just 2% of Gen Z. 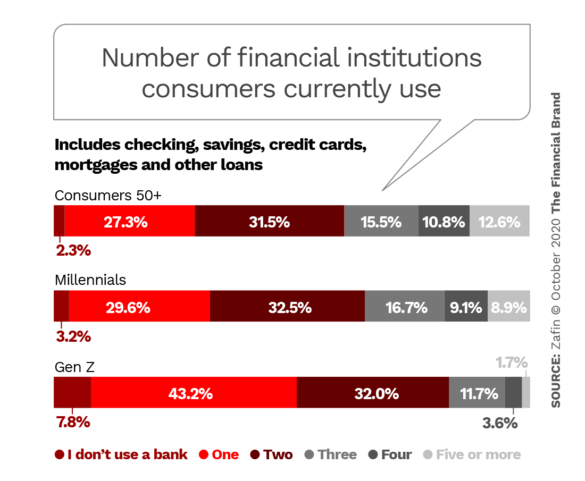 However, the research also uncovered the rather remarkable fact that nearly three quarters of Millennial and Gen Z consumers (and two thirds of all respondents) would consider getting all their financial services from a single bank or credit union.

Many studies focus on the desire of consumers to switch financial providers, and this finding could suggest a willingness to switch, but it also opens the possibility for incumbent institutions to consolidate more of a person’s banking business if they have the right mix of digital capabilities, personalized offerings, benefits, products and incentives. 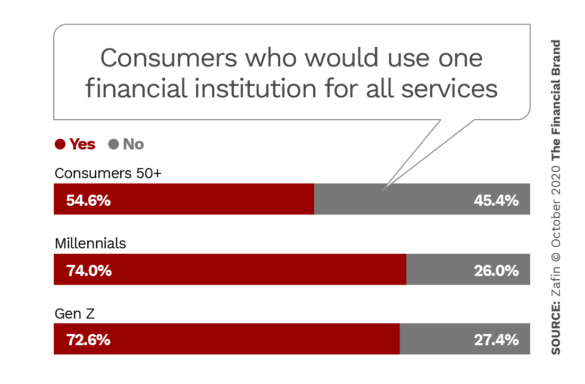 “This high willingness to consolidate points to a substantial gap between current behaviors and what might be possible in the future,” says Alexandra Roddy, CMO and EVP of Partnerships at Zafin tells The Financial Brand.”The convenience of single-source financial services is compelling to younger consumers.” . But she adds that many haven’t found one institution that provides everything they need. Roddy believes this is an “opportunity for financial institutions to target Millennials and Gen Z with bundled offers supported by compelling messages that highlight quality, convenience and the rewards of a broader relationship.”

She also suggests that aligning with younger generations’ values regarding the environment, social justice and community commitment — along with demonstrating integrity and trust — could help secure more of their business.

“For any age group, it is easier to consolidate with an institution you trust,” Roddy states. “For younger consumers, it’s even more so.”

Digital Uptake Will Have a Long Tail

Research and anecdotal evidence have shown that the bonds between incumbent financial institutions and their retail and small business customers have strengthened during the pandemic period. Safety and security is part of the reason, along with the ability for most banking interactions to be handled digitally — or at least outside the physical branch (including drive-through).

80% of the respondents to the Zafin survey agreed that their banking provider’s online and mobile banking capabilities are making banking easier for them. The COVID-19 experience has only heightened this, as close to two-thirds (64%) say the pandemic made them appreciate mobile and online banking more than they had previously. 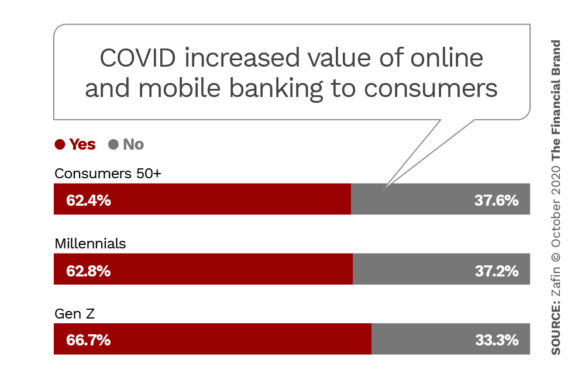 The similar results across the three age groups did not surprise Roddy, who believes the idea of low digital literacy among older generations is “greatly overstated.”

“If older generations disproportionately spend time in bank branches,” she states, “that could be because these folks are highly motivated to increase daily human interaction. That is very different than [lack of] digital literacy.”

Reinforcing the importance of having easy-to-use digital offerings, the survey found that the top two reasons (of five listed) why consumers would select a particular bank or credit union were: “Better pricing (rates and fees),” at 64% and “Better online and mobile banking capabilities” at 63%. For Millennials and Gen Z, the emphasis was heavier on digital capability while pricing was more important to the 50-plus crowd.

There’s an ongoing debate as to what degree branch-using consumers will return to that channel once a COVID vaccine becomes widely available. Roddy considers it an open question but draws an interesting analogy:

“Have we missed restaurants so much that we will dine out more than before? Or, have we rediscovered the joys of cooking and eating together at home? I can see the answer to that going either way,” says Roddy. “That said, financial institutions have not introduced much joy or fun into the branch banking experience, so whereas we may visit restaurants with renewed enthusiasm, I think there is reason to believe that branch banking will not return to pre-COVID levels.” She believes that the situation with community banks and credit unions may be an exception because of their greater sense of community.

Read More: What Big Techs Like Apple Can Teach Banks About Brand Loyalty

Personalization Will Be a Loyalty Builder

Across all generations, 88% of consumers believe it is important for their financial institution to provide recommendations relevant to them based on their product usage and behaviors, similar to what Amazon and Netflix do. (The results include responses ranging from “slightly” to “very” important.)

It would seem banks and credit unions have a ways to go to match that expectation: Half of the sample describes the interactions with their financial institution as either “Not at all personalized” (16%) or “Slightly personalized” (34%). 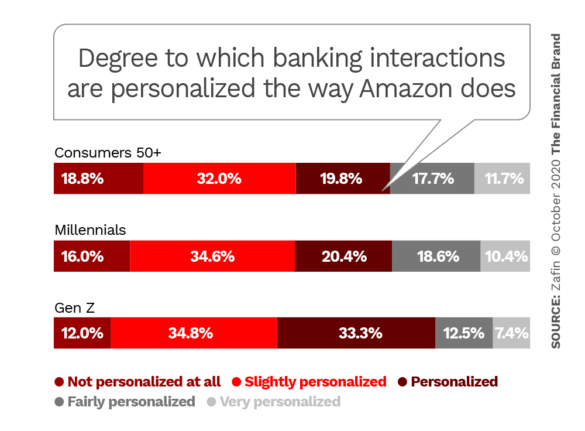 Looked at from a “glass half full” perspective, having 50% of banking consumers agree that their interactions are personalized could be considered significant progress. Roddy, however, doesn’t see it that way.

“Given banks’ access to massive amounts of customer data, combined with the proliferation of tools to derive actionable insights from that data, shouldn’t a customer’s banking experience be among the most personalized business interactions they have?” she asks.

Most Valued Benefits Are Yet to Come

Financial marketers have come up with a variety of benefits to help cement a stronger bond and relationship with customers. Zafin listed nine of these in an effort to identify the most important. 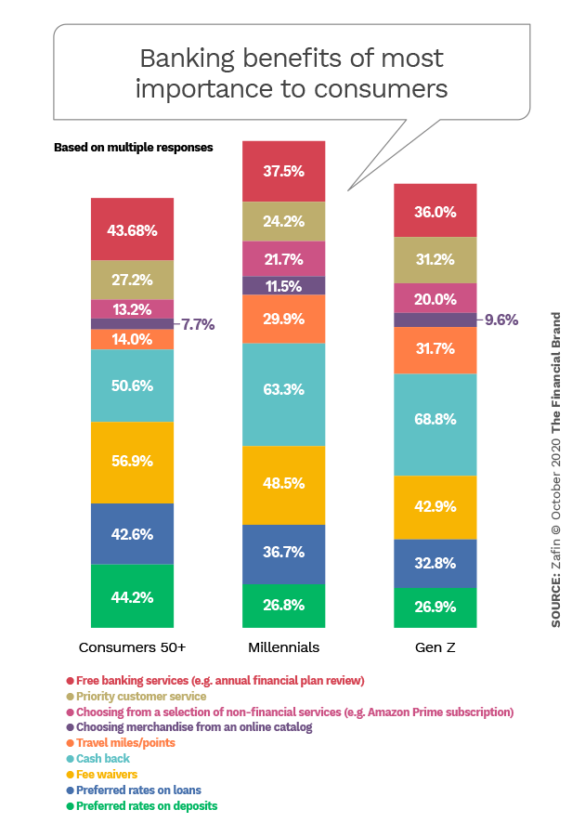 The benefits listed in the survey represent the customary offerings, Roddy notes, and she urges bank and credit union executives to go beyond this particular ranking and not rely solely on survey data.

She believes there is a next-generation banking experience out there that goes further than what the survey points to. Defining that breakthrough experience is the central challenge for retail banking executives, says Roddy. “For an industry that lags others when it comes to product and experience innovations, this is a massive opportunity.”

Another finding that jumps out from the Zafin survey data is that 86% of Millennials and 79% of Gen Z respondents say they would switch to a financial institution that rewarded them for “defining and achieving financial goals” or would expand their relationship with a current provider that did that. Examples of goals are saving for a down payment on a home, paying off student debt, and reaching a retirement goal. 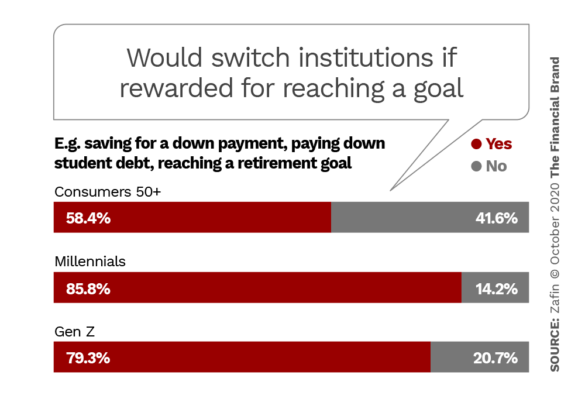 “Younger consumers consistently respond positively to gamified experiences across all sorts of contexts, including education, health and fitness,” Roddy states. This can take the form of points, badges, levels and leaderboards, she adds, noting that various fintechs and challenger banks have used gamification, as have a few traditional banks. Mint gamifies budgeting, for example, and SmartyPig gamifies goal-based savings. PNC Bank, Roddy points out, has several gamified elements within its Virtual Wallet, including Money Bar, Wish List and “a fun little app” called Punch the Pig.

Roddy believes financial institutions are just beginning to scratch the surface of designing gamified experiences that not only attract digital natives, but turn them into stickier customers. “The immediacy and feel of gaming,” she maintains, “can make mobile banking apps so engaging that the usual lures of traditional banking — higher rates and low or no fees — may not matter as much to highly engaged customers.”