Subscribe Now Get The Financial Brand's FREE Email Newsletter
The vast majority of fintech firms achieve only regional relevance due to lack of funding, marketplace differences and inflexible business models. For the fintech sector to reach its global potential, established financial institutions, regional and global regulators, and fintech firms themselves will need to collaborate.

I just spent a week in London after close to three years of not traveling internationally due to the impact of the pandemic. The primary purpose of my visit was to be a presenter at the Fintech Finance Awards hosted by Fintech Finance News. From hundreds of entries, 18 winners were selected, recognizing the best of the best in fintech offerings in sectors including consumer banking, business banking, embedded finance, open banking, payments, lending and many other financial solutions.

It is indisputable that fintech firms have become a valuable source of financial innovation and customer choice globally. However, in talking to bankers, fintech leaders and consultants at the event and during the rest of my visit to London I found challenges remain. My key takeaways:

One overarching observation: While the winners represented the best-in-class fintech solutions from across Europe, the names of most of these firms would be unfamiliar to people and organizations outside the region. In fact, some of the finalists were not even familiar to people at the event.

Is the challenge marketing, distribution, scalability, regulatory requirements … or something else?

Some Fintech Firms Are Winning Despite Marketplace Challenges

The uncertain economic environment in Europe and globally is impacting the entire banking ecosystem, but has hit the fintech sector especially hard. Funding new and existing fintech firms has become an uphill battle as valuations have fallen. That said, many of the most differentiated and future-ready fintech firms have found ways to remain resilient, leveraging flexible business plans and positive cash flow to their advantage.

According to McKinsey, challenges for fintech firms include market maturity, access to capital, a challenging regulatory and legal framework, access to talent, the ability to scale across borders, and customer receptivity to new solutions. Issues of language and currencies can also play a role in determining whether fintechs can emerge and scale across regions.

In Europe and the U.S., several fintech firms have moved from the fringes of the banking industry to become primary players. For instance, in each of the seven largest European economies, at least one fintech firm now ranks among the top five banking institutions as measured by market value, McKinsey found. In most cases, the growth of fintechs has been driven by strong customer satisfaction scores, very aggressive pricing, ease of use, speed of service and product differentiation. Some examples include Swedish fintech Klarna, London-based Revolut, China-based Ant Group and Tencent, and Brazil-based challenger bank, Nubank. 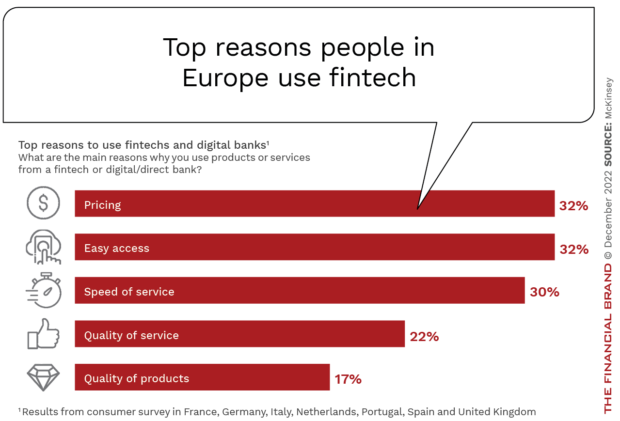 Fintechs have also contributed significantly to the speed of innovation across the entire banking ecosystem. This has been as a competitor as well as a digital transformation partner for legacy financial institutions. In some less-developed regions, fintech firms have become the de facto financial services leader by providing banking to underserved or unserved markets.

Wide Divergence Between the Best and the Rest

Research shows there is a wide gap between successful regions of the world and those less successful in the development of fintech organizations. For example, the United States, United Kingdom and Sweden significantly outperform other European countries. Developing countries also tend to do well with fintech performance. The U.S. benefits from a rather homogeneous market, with a single language and a relatively cohesive regulatory system. 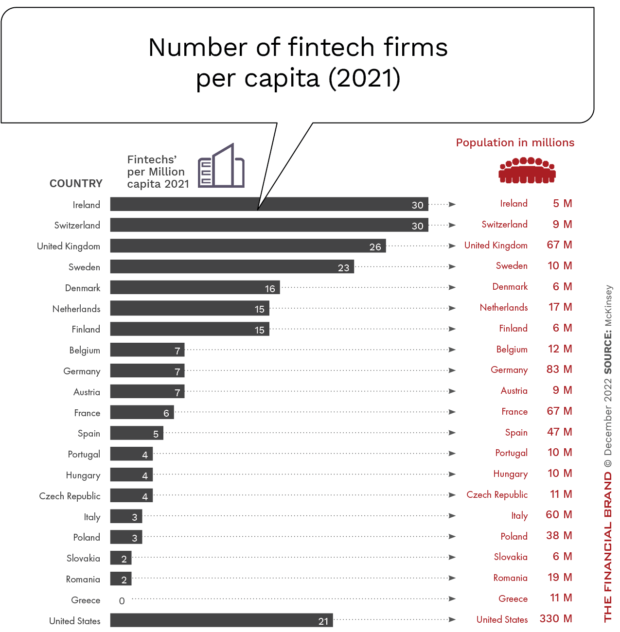 Similar to the U.K, the U.S. has connections  to other large economies and has a large pool of investors, making access to capital easier. Both countries can also attract talent from the world’s best universities.

In some markets, fintechs are already serving 30% of customers and generating 3% to 5% of banking revenues.
– McKinsey

A wide performance gap also exists between the strongest fintechs and those struggling to achieve relevance, funding, scale and revenues. This gap has grown much wider in the past year as the economy and funding sources have faltered.

The same performance gap exists among traditional financial institutions. Those legacy banks and credit unions that have doubled down on digital transformation initiatives have became the darlings of Wall Street.

Larger financial institutions as well as leading non-traditional firms are stealing the lion’s share of market cap growth in the financial services industry and are breaking records for venture capital investment. According to McKinsey’s Global Banking Annual Review, this is causing a significant divergence between the industry’s top performers and performance laggards. 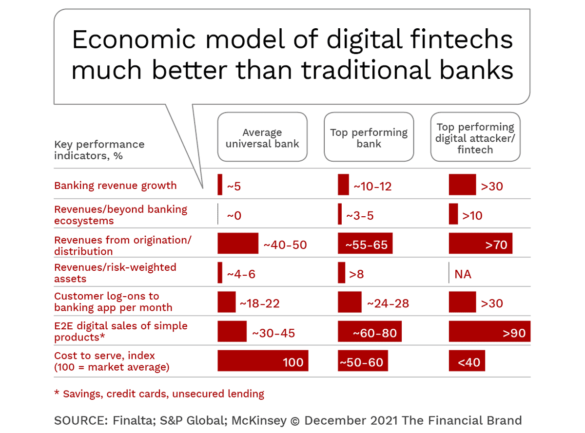 Building scale in the fintech marketplace is usually very slow. Even then, growth is often achieved within a single region. McKinsey indicates that most countries with more than one unicorn it takes between six and eight years from initial funding to become a unicorn. Often, the inability to scale beyond borders occurs because the fintech’s business model was built without an internationalized vision.

To become future-ready, fintechs in every global region will need to be able to expand beyond their home market.
– Digital Banking Report

Says McKinsey: “In the coming months and years, it will be critical for all stakeholders — including public institutions, established financial industry players, and fintechs — to combine their strengths by establishing the enabling structure and mechanisms the sector needs to reach its full global potential.”