Subscribe Now Get The Financial Brand's FREE Email Newsletter
The neobank sector is currently challenged by a global funding squeeze. But incumbents must realize that neobank competition is not going away. New data point to the factors that will lead to neobank (and incumbent) success as the next round of competition heats up.

By Alexandros Argyriou, CEO of Scientia

Neobanks weren’t what you’d call an instant hit in the U.S., but they’ve slowly but surely gathered considerable momentum overall.

It’s true the turbulent state of the global economy over the past year has made fintech funding much harder to come by, and some neobanks are struggling. Case in point: Varo Bank, which could run out of money by the end of 2022 according to some reports.

Yet despite the bumpy financial road ahead, digital banking competition will continue to be fierce with more customers open to taking the plunge and switching to digital-first banking.

So which neobank competitors are best placed to catch the ongoing wave and win the bulk of this new business? And what can incumbent banks and credit unions learn from neobanks’ approach to digital?

To answer those questions, we used our digital banking research platform Fintech Insights to compare leading U.S. neobanks and see how their offerings stack up.
Our findings were surprising, to say the least.

Fintech Insights evaluates actual bank accounts, going through their various features and functions and using that data to build a picture of the market as a whole. This analysis was carried out in April 2022.

We then identified which functions the apps had in common, where they differed from each other, and which would give them a competitive advantage.

Below is what we found out and what it tells us about the current state of the U.S. neobank market.

Which U.S. Neobanks Have the Most Feature-Rich Apps?

Overall, the 17 neobanks we evaluated collectively had 500 functions. The most feature-rich neobank app was SoFi, the clear winner with a total of 212 functions. Of those, 55 related to wealth management and investments.

The next closest in terms of total features was Albert with about 135. Other apps with 100 or more features (but less than 135) were Acorns, Current, Envel, GO2Bank, MoneyLion and Stash.

At the other end of the spectrum, Daylight came in last with 66 functions.

If performing a task on a mobile app is clunky, convoluted, and frustrating, it may push users towards competitors that, while not as feature rich, may have smoother user experiences.

This lesson applies as much to banks and credit unions as it does to neobanks. In a 2021 survey by Morning Consult, poor digital banking capabilities were the third biggest reason customers switched their primary bank, after data protection concerns and high fees.

More to the point, more features aren’t necessarily a mark of greater differentiation.

In fact, despite the fairly significant difference in the number of functions between the most feature-rich and least feature-rich apps, our data shows that all 17 neobanks have broadly similar offerings.

Where neobanks have differentiated themselves, they've done so by implementing features in a specific category.

Stash is the only neobank we analyzed that offers junior accounts, making that a point of differentiation.

By contrast, SoFi and Albert set themselves apart by offering the largest number of investing features — 55 and 40 respectively — while MoneyLion is the only neobank with eWallet capabilities.

How Differentiated Are Neobanks Overall?

Out of 500 functionalities, only seven are shared by all 17 neobanks. 79 features are uncommon — offered by only six to 12 banks — while a whopping 386 features are quite rare to find. Only five of the neobanks we analyzed offered some of these.

Here again, SoFi wins out by being the neobank that has the largest number of unique features overall. 34 of its features aren’t available from any other neobank on the U.S. market. 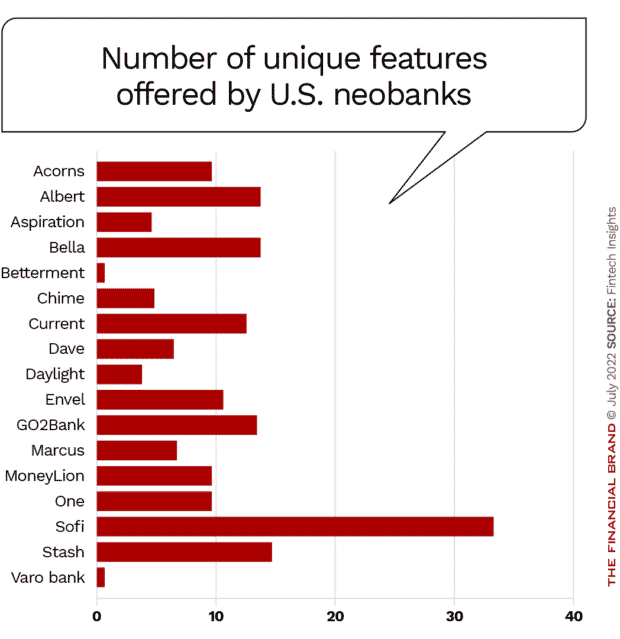 It bears repeating that having more unique features than any other competitor isn’t equivalent to having the best user experience, the superior app or a greater chance of becoming a market leader.

Case in point, despite having a relatively low number of unique functions, Chime dominates the U.S. neobank market, with 13+ million active users.

But the more interesting observation is that most of the unique functions we identified are intended to achieve similar goals, but go about doing so in radically different ways.

Both neobanks and traditional financial institutions spend way too much time building solutions to problems others have already addressed.

In other words, it appears that, rather than coming up with truly innovative features, neobanks are spending their time, energy and resources reinventing the wheel instead of building on what others have done.

Needless to say, incumbent banks and credit unions are often equally guilty of this.

A 2020 study by Infosys Finacle found 62% of incumbents’ digital deployments fail to meet expectations. More often than not, this is because, instead of innovating, digital banking teams focus most of their energies on figuring out solutions to technical problems that others have already addressed.

If the current state of the U.S. digital banking market is fairly homogeneous, the good news is that there’s plenty of room to grow by differentiating.

Looking at our analysis, it’s clear there are several market gaps no neobank or incumbent is adequately addressing right now. In particular: junior accounts, eWallets and wealth management.

But in order to seize the opportunities these underserved areas present, the banking industry is going to have to do its homework.

By 2028, the North American digital banking market will be worth $600 billion, per Global Market Insights, which means dozens of new neobanks will likely enter the space. And in this ever more saturated market, there will be no room for trial and error.

If neobanks want to build digital banking features that wow customers and truly set them apart — and if incumbent banks and credit unions want to be able to fend off the threat and retain or even grow their market share — they’ll need a solid foundation on which to build.

Studying the market and understanding how competitors approach similar challenges and objectives can provide them with endless learning opportunities, inspiration and the data they need to do better.