Subscribe Now Get The Financial Brand's FREE Email Newsletter
In a payments marketplace already crowded with plastic card consolidators such as Plastc, Swpe and Coin, and mobile payments solutions such as Apple Pay, Android Pay, Samsung Pay and PayPal, Stratos hopes to encourage consumers to pay for plastic that will replace other plastic cards in their wallet. Are they too late to the party?

In a marketplace that seems to be introducing the ‘next best thing’ in payments on a daily basis, Stratos hopes to break through the noise with a payments solution that looks vaguely similar to Coin, a social media sensation that has yet to live up to the initial hype.

Similar to other all-in-one cards Coin, Swyp and Plastc, the Stratos Card is intended to replace multiple pieces of plastic already in a consumer’s wallet with another piece of plastic. Unlike the competition, Stratos is using Bluetooth technology and has answered many of the concerns with other solutions around security, acceptance and introduction delays. The Stratos Card will be shipped beginning in April.

Developed behind closed doors with $7 million in venture capital funding (as opposed to the more public option of crowdfunding), the team at Stratos, headed by 25-year old CEO and co-founder Thiago Olson believes they have created a payments solution for people not yet ready for mobile payments. Olson explained to CNET that the Stratos Card is “like an iPod for your wallet.” He said: “Just like an iPod digitizes and stores all your CDs and music, Stratos stores all your cards while adding security features and FitBit-like card tracking.” 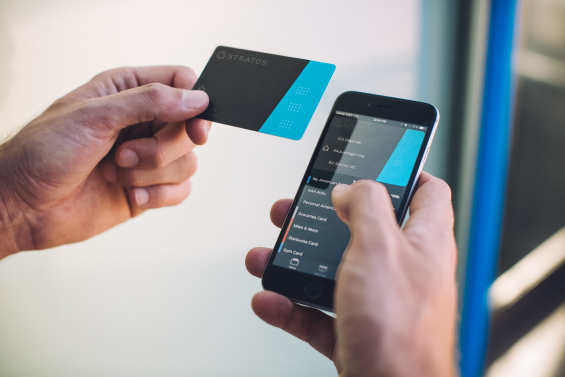 Not Your Mother’s Credit Card

The Stratos Card is unique in many ways compared to traditional credit and debit cards or even the newer wave of all-in-one plastic card payment solutions. Some of the differentiators include:

According to Olson, Stratos is hoping to provide a unique payments experience for customers. “We want to provide a lifestyle brand experience by offering a membership that includes card upgrades, replacements, special offers and white glove support.” 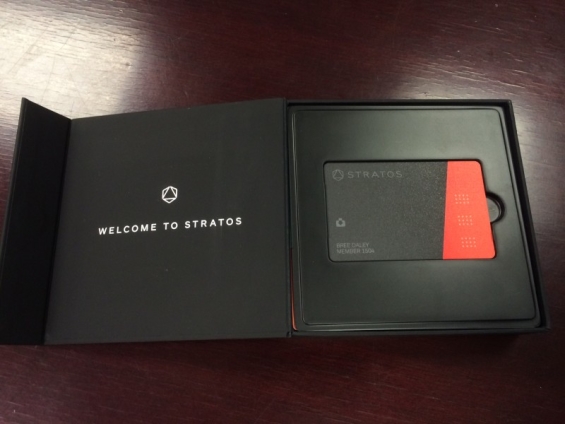 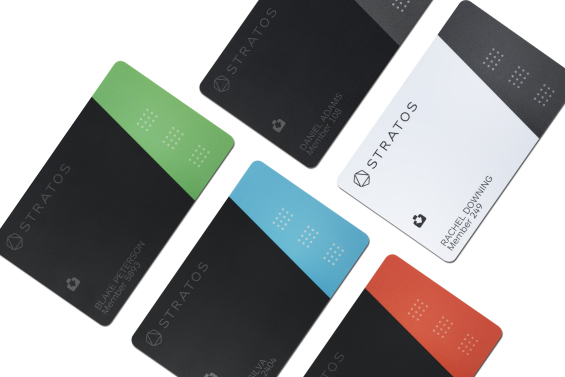 How The Stratos Card Works

Similar to other all-in-one solutions, current credit card information is stored in a corresponding mobile app using a small card reader that plugs into a phone’s headphone jack. By swiping a credit card, debit card or gift card through the reader, the card information will be stored in the app and transmitted to the Stratos Card when a person wants to pay.

While there’s no limit to the number of cards that can be stored in the app, the Stratos Card itself holds only three cards for quick access. Three touch-sensors on the front of the card correspond to each card selected, allowing the user to choose which stored card they want to use. The Bluetooth connection to the customer’s smartphone allows for additional card choices to be made.

When a consumer taps one of three flashing lights on their Stratos Card, their mobile device pairs with the card, allowing the user to receive instant notifications on the mobile lock screen for location-based suggestions as well as reminders of the three cards loaded. The location-based suggestions may include loyalty or rewards cards for selected retailers, gas stations, etc. There is also instantaneous feedback as to which card has been selected when pressing the touch sensor.

The Stratos Card is unique in many ways, including that it is the only all-in-one plastic solution that doesn’t display card information on the front of the card. While not necessarily ‘high tech’, this makes Stratos potentially safer to use, since the user’s card number won’t be given away if it’s stolen.

On the technology front, similar to Apple Pay and other newer payment options, the Stratos Card uses bank-level encryption as well as using a tokenization feature that creates a new, unique credit card “token” number each time it’s used. Since the retailer never sees an actual credit card number (just the token number), there is less potential for a breach like what occurred at Target.

While the Stratos Card does not have a chip, and therefore is not compatible with contactless NFC card readers, the company says it’s working on adding both features for future models, according to an interview with CNN Money.

Since the Stratos Card is connected to the user smartphone via Bluetooth, users can receive alerts in case they lose the card or forget the card at a retailer or restaurant. The user can also cancel the three cards that are loaded on the card.

If the user is separated from their phone for a specified length of time, the card goes into lock-down mode, making the card useless to the finder. This is similar to features on both Coin and Plastc as well as the new mobile wallet apps. 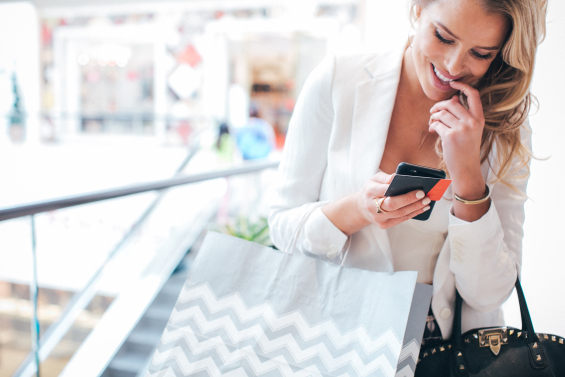 Will The Stratos Card Succeed?

Who knows? With so much innovation and new players in the payments battlefield, it is difficult to pick a leader, let alone a potential winner. Winners in the payments marketplace will most likely be determined by ease of use and meeting consumer expectations.

When asked about mobile wallet alternatives such as Apple Pay, Olson says that Stratos has the advantage that NFC POS options are still not widespread. While this will obviously change over time, Olson also believes that consumers will still have issues handing over their phone to retailers and waiters to process payments.

When asked about the issues related to the often delayed introduction of the Coin card, Olson told CNET, “We learned the importance of following through on promises made to consumers and how quickly things can turn sour after missing dates and not communicating properly. We intentionally avoided crowdfunding and early marketing approaches, because again we wanted to ship a product to our customers that is the real thing that works everywhere and is secure from the get go. We want to start our brand off on the right foot.”

If nothing else, it is fun to see the amount of innovation and activity taking place in payments.