Subscribe Now Get The Financial Brand's FREE Email Newsletter
The vital role community banks and credit unions play in their local markets is recognized by their retail and business customers. But that support only goes so far. Institutions that fall behind with technology (as many have), will lose customers, not to neobanks or even megabanks, necessarily, but to aggressive 'payment techs.'

Neobanks are overrated as a banking threat. Their business model is flawed and eventually there will be a reckoning. So says a fintech executive who briefly launched a neobank before realizing that working with banks and credit unions, rather than against them, was a better path to success.

Community financial institutions often see themselves as the good guys in an increasingly fragmented banking world, a sentiment that was strongly supported by both consumer and business customers in a new survey Mantl conducted with Wakefield research.

So all’s well then? Not quite.

Where the Biggest Threat Lies

The Financial Brand spoke with Harley just prior to the release of Mantl’s survey results. When asked whether the big payment-based companies like Square and PayPal were of more concern than neobanks or megabanks, Harley responded: “They’re definitely a threat. Community institutions should be worried about the likes of Square.”

The real threat to community institutions comes from big, aggressive, payment companies that have penetrated deeply into banking.

Both Square and PayPal are aggressive, deep-pocketed, tech-forward companies that have already penetrated deeply into banking. (Square is already running Square Financial Services under an industrial loan charter.) These companies represent “an existential threat” to community institutions that fail to adopt the kind of modern digital solutions these payment companies provide to both consumers and businesses, Harley states.

Technology is now table stakes, Harley states. He is betting his company on the fact that community banks and credit unions can rally to beat back the nonbank threat. For a brief time, the company was a protagonist, not a supporter of banking.

Founded in 2016, Mantl began as a challenger bank called MyFin, but the team saw more potential as a vendor and quickly pivoted their tech expertise to help banks and credit unions advance more quickly. In brief, the company provides an “API core wrapper” — technology that wraps around and integrates with financial institutions’ legacy core systems. Mantl’s initial product was online account opening, still a mainstay, and a key part of digital transformation.

Why Community Institutions Lag with Tech

In its survey, Mantl asked consumers, small business owners and financial institutions about their use of and desire for online account opening. It found that a majority of consumers and small businesses say they will not bank at an institution that does not offer online account opening. Yet 43% of community banks and credit unions still do not offer that capability for consumers and 47% do not offer it for businesses. 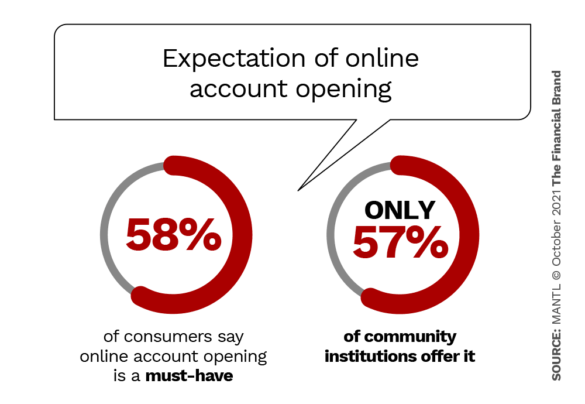 The table below lists a wider range of digital banking-related features expected by consumer and business customers, and the number of community financial institutions that offer them.

Several factors explain why community banks and credit unions have not kept pace with the demands of digital banking, according to Harley, even after the wake-up call provided by Covid-19.

Financial institutions are naturally risk averse, Harley points out. While that trait works admirably in regard to credit and rate risk, it tends to work against technology innovation. That may help to explain why 90% of the roughly 10,000 community banks and credit unions outsource their technology to just a handful of large tech vendors. Safety in numbers, perhaps.

Financial institutions that still view technology as an expense will never be able to keep up with agile new competitors.

Harley maintains that many of the solutions provided by big tech firms have been “bolted onto each other” as a result of years of acquisitions. This leads to slow innovation. As one example, he says a provider with an API-first architecture can push out product updates weekly compared to once or twice a year from a legacy provider. The significance is speed of innovation, which matters far more now, when banks and credit unions confront the likes of Square and PayPal.

The fault lies not just with big tech vendors, however, as can be seen in the chart below, reflecting financial institution responses to Mantl’s survey. 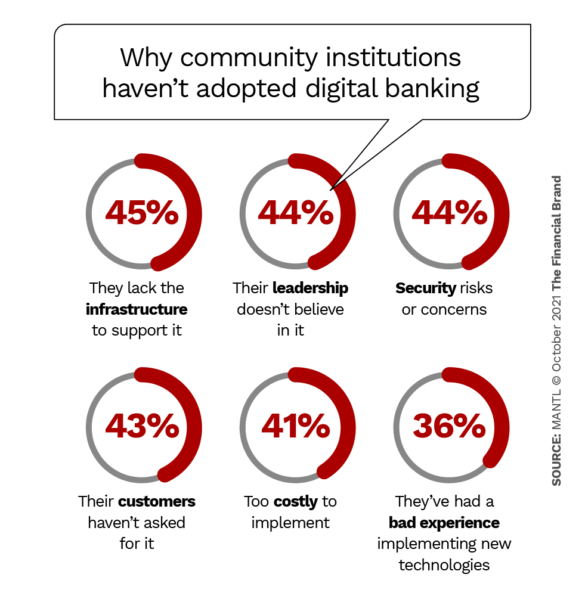 “Not all banks and credit unions are trying to grow,” Harley points out, “and many institutions see technology as an expense, which they try to minimize.”

“When you try to minimize your cost,” the CEO continues, “you tend to go with the cheapest solution and that typically is just a check-the-box offering. You can say you have it, but it doesn’t really work well.”

Another factor deterring community institutions from more rapid uptake of digital technology, according to Harley, is the fear of losing the personalized approach when customers move online. “In reality,” he says, “it’s not an ‘either/or,’ it’s an ‘and’.” The key is to have technology complement both the digital online experience and the in-person experience, Harley states.

This trend can be seen in e-commerce, he points out. Originally online-only brands like Casper, the mattress company, eventually started building physical locations. Even Amazon is rumored to be planning this.

“You must have efficient online capability to compete,” Harley stresses, “but that doesn’t mean that the human-to-human approach, whether that’s in a branch or through a relationship manager, is not important.”

How Community Institutions Can Fend Off the Tech Threat

Community banks and credit unions have significant strengths and advantages on which to build. Two statistics from the survey demonstrate this: 92% of small business owners and 89% of consumers agree that community institutions are as — or more — vital to the U.S. banking system as large national banks.

Further, consumers and small business owners emphasized the growing importance of providing underserved communities with access to financial services. As indicated in the chart below, consumers believe community financial institutions are better at this by a significant margin. 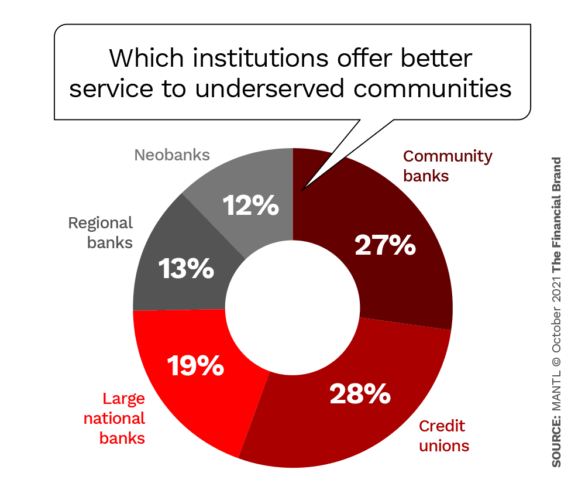 As Harley observes, community institutions are nimbler and more responsive and better understand the needs of their communities. They are able to build deeper relationships with their customers.

These strengths alone, however, won’t be enough to hold off the PayPals of the new banking universe, Harley maintains. He has several suggestions regarding mitigating the threat.