Subscribe Now Get The Financial Brand's FREE Email Newsletter
Banker turned digital disruptor Anne Boden, founder and CEO of U.K. digital bank Starling, offers a guided tour to the future of fintech-based banking and other financial services in her book 'The Money Revolution.' She expects to see a rebirth of traditional banking, but in a much different form: as marketplaces for the best financial services.

Challenger bank pioneer Anne Boden has written a book for consumers that intentionally or not turns out to be a guidebook for what may well be the future of retail banking.

The book, The Money Revolution: Easy Ways to Manage Your Finances in a Digital World, is a must-read for retail banking executives and financial marketers for a couple of reasons.

First, it explains at length how Boden, founder and CEO of successful U.K. challenger bank Starling, and other disruptors are thinking. This is increasingly important as some of these institutions are coming to the U.S. from Europe, and as U.S. regulators at both the federal and state levels adopt more encouraging attitudes toward financial innovation. 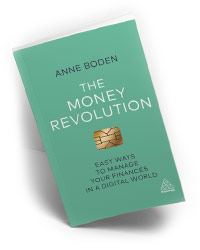 Second, the bulk of Boden’s book can best be described as a veteran explorer’s guide to “Fintech Land.”

Specifically, she gives a chapter by chapter guided look at the best of the apps that have been introduced and why she believes they are fitting consumers’ financial needs better than traditional banking service. One interesting app that stands out, for example, is Hiatus, which helps spot and cancel subscriptions that the consumer no longer uses but continues to pay for, draining money every month.

For busy bankers and credit union executives who see an article here, an article there about one fintech player’s app or another, competition and the degree of change going on may seem less massive than it really is. As Boden portrays it, the industry faces fintech enabled competition on nearly every front of retail banking.

She speaks of fintechs as partners and potential partners for Starling and clearly they could be so for traditional institutions that don’t feel the need to home-grow everything.

Anne Boden’s roots lie in decades of traditional banking in the United Kingdom, but in the aftermath of the financial crisis she began to wonder if there wasn’t a better way to deliver consumer financial services.

“What my bank and others were offering was a service that was not a whole lot different from what you could already get using your own PC in the warmth and comfort of your own home.”
— Anne Boden, Starling

Boden spent years at Lloyds Bank, but it was when she was Chief Operating Officer at crisis-battered Allied Irish Bank that she began to question what she was resurrecting. She questioned not only how banking worked, but its fairness to consumers.

A defining moment for Boden was development of Allied Irish’s take on the modern banking office.

“We opened a very high-tech branch in Dundrum, Ireland, which was christened The Lab and billed as a ‘new digital experience’,” writes Boden. “Even at the time I couldn’t help but muse it had missed the point. Yes, customers clearly had an appetite for something a bit more high-tech, but what my bank and others were offering was a service that was not a whole lot different from what you could already get using your own PC in the warmth and comfort of your own home.”

At the same time, Boden was frustrated by the inability to change what she saw as a history of nontransparent, sometimes unfair service practices — she criticizes bank overdraft practices frequently in the book. She found herself surrounded by mythology. Staff frequently told her that this or that step couldn’t be taken, or was barred by regulation, accepted industry practices, and more. Things that bothered her had to be that way, they insisted.

Yet when Boden dug into matters, she found that often wasn’t true. Industry mythology had simply evolved into “the rules” through frequent tribal repetition.

Indeed, consumers themselves had bought into the myths, evidenced by one consumer’s question to her: “Will my bank get upset if I open another account? I have been with them for ten years.”

So Boden saw this inertia on one hand while the ability to provide nearly everything consumers needed online and on mobile devices was exploding.

Boden believed something better could be built. After a period of research, she set out to create what is now Starling in 2014. As she states in the book, she wanted to create an approach that would be consumer friendly and offer consumers wide choice:

“My new bank would have no physical branches because it would operate from the smartphones we all have with us all day, every day, making my money services accessible 24/7. The philosophy of this service would not be predicated on a mission to sell customers products. It would be a service that looked after customers and catered to their needs, rather than the other way around. As I developed my idea, I realized I was at the beginning of an opportunity to fundamentally change our relationship with finances, just as Amazon had changed shopping and iTunes had changed music.”

How Starling is Building a Marketplace of Curated Financial Services

Starling began as a challenger bank offering a mobile-only checking account. (Boden calls it a “current account,” following U.K. terminology, and U.S. readers will need to adjust a bit to a U.K.-oriented viewpoint and to British spelling.) Over its short life Starling has expanded to offer business accounts and joint accounts. But central to Boden’s vision for the future for Starling and for consumer financial services is her conception of Starling as a “marketplace.”

Boden sees the mobile device as a pocket banker, a miniaturized advisor drawing on a multitude of apps that cover every aspect of a consumer’s financial life. As she sees it, the traditional friendly neighborhood banker, qualified and experienced enough to render sage advice on personal finance challenges has been extinct for years. But artificial intelligence, machine learning, huge amounts of existing data, and continuing and increasing willingness of consumers to share more data will result in better deals and better, though automated, advice for consumers. 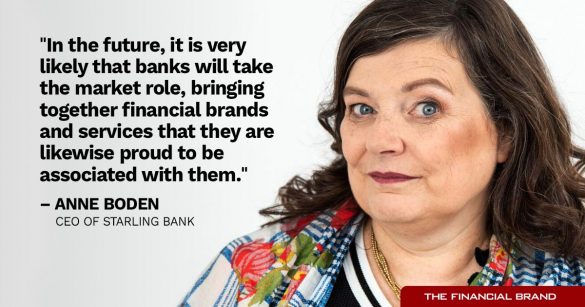 She does not expect to see the extinction of banks that others do. She actually sees a kind of rebirth for banks at the intersection of mobile banking, open banking, data sharing, and other trends. Boden sees banks as active clearinghouses of what’s out there.

“To visualize how this works, I always imagine a good quality market such as you might find in any town or city center near you,” writes Boden. “This is a place where individuals and small businesses come to sell foodstuffs, from excellent coffee to fine cheeses…. In the future, it is very likely that banks will take the market role, bringing together financial brands and services that they are likewise proud to be associated with them.”

In the book Boden notes that Starling already has more than two dozen partnerships with third-party providers offering everything from personal insurance lines to savings to investments and wealth management.

“I predict we will see many more models like this emerging over the next few years as banks understand their new role at the core of a customer’s relationship with money,” writes Boden. She writes of the appreciation she has come to have of the “can do” attitude of many fintechs.

“Many of the older, established financial institutions simply don’t have technology that is advanced enough to keep up with the latest developments,” Boden states.

The challenger makes an interesting point that big banks were actually ahead of fintechs in bringing out banking apps. They simply created apps that replicated the most basic functions of traditional models without rethinking the point of it all, she believes. Here, and in other places, she uses Starling as an illustration of the new attitudes of a successful modern retail bank. for example:

“The new approach from digital banks is 180 degrees different. Starling Bank, for example, is built to be highly tactile. From facial recognition to ID your account, to detailed breakdowns of what you’ve spent on groceries, entertaining or household bills, it aims to promote a far more open relationship with money, making it a more visible, tangible, accessible experience.”

Clearly, Boden sees apps as a fresh way of doing almost everything financial. Unlike other disruptors, she doesn’t predict that banking will become embedded in other functions or services. What she envisions is banking as a centerpiece to lots and lots of functionality through apps that hook into the banking relationship.

“Boden doesn’t predict that banking will become embedded in other functions or services. She envisions banking as a centerpiece to lots of functionality through apps that hook into the banking relationship.”

Boden sees the balance changing from monolithic banking organization and tiny consumer to a more even relationship. The informed consumer can assemble apps that best suit their needs and habits. Boden encourages consumers to take control of their money and to use the many apps available to squeeze the most out of it. Clearly she sees today’s system as stacked against the consumer, and the consumer fighting a continuing battle to get the most done with what they earn and what they’ve saved. More control of their finances means a better victory.

The Money Revolution advises consumers about many different kinds of apps, beginning with the most basic issues such as credit reports and the impact of credit ratings on one’s financial health. Apps for saving, investing, managing bills, making charitable donations, and handling travel costs are covered. So are apps for borrowing both for personal and business purposes and navigating the historically long and arduous mortgage borrowing process. She also offers fresh thinking about offering insurance to consumers.

Boden does assume a comfort level for data sharing that may not be universal and whether the trust level that she assumes, which makes all this potentially work, is widespread is hard to say. In many quarters such trust does seem to be there — or at least a lack of concern.

Boden is clearly an optimist.

“One of the real beauties of the new crop of fintech apps is you barely need to think twice about how they all work,” she writes. “Just enjoy that they do work and that access to (and knowledge about) your cash is so much more readily available. Then all you need to do is reap the benefits of a more organized, fairer, transparent financial system.”