Subscribe Now Get The Financial Brand's FREE Email Newsletter
With simplicity of design, ease-of-use and social engagement as its greatest strengths, Venmo is becoming the standard for how millennial customers think about peer-to-peer payments.

Beyond a convenient way to split a bill and pay family and friends instantly, Venmo’s Facebook-like interface for peer-to-peer (P2P) payments has become a social network approach to mobile finance. And, as social media continues to define how people interact with their phones, this app can actually be the most natural way to manage payments between friends.

Venmo launched in 2011 after remaining in beta testing for two years. Just a few months after its release, it was purchased for $26.2 million by Braintree, the same payment processing company for social startups like Airbnb, Uber and LivingSocial. So when PayPal acquired Braintree in 2013, it also gained Venmo as a star player on the PayPal team.

Most people already know PayPal as the most widely used peer-to-peer payment network. But PayPal charges a 2.9% transaction fee with each debit or credit payment. Venmo, on the other hand, is completely free when used with a major U.S. bank and debit card. There is a 3% transaction fee only when used with a credit card. So, as opposed to trying to take a cut of each payment, Venmo has created a new type of social dialogue around payment transactions.

The Venmo app reached $314 million in payments in Q1 of 2014, which was the same volume as Starbucks’ mobile payments app during that time period. According to Forbes, Venmo is predicted to reach $90 billion in payments by the end of 2017. 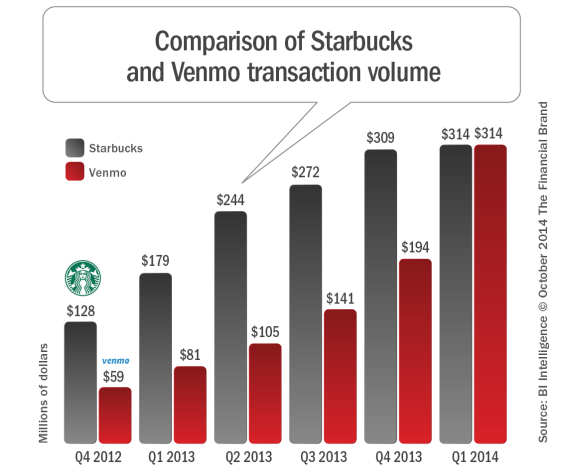 Venmo’s fast growth is likely because it functions in ways people are already using popular apps outside of finance.

A mobile app usage study by Nielsen shows that the amount of time people are spending on mobile apps has nearly doubled in just two years. Between Q4 of 2012 and Q4 of 2013, people spent the most time on search and social as well as entertainment, communication, productivity and shopping apps.

Coming in at last place – finance apps did not command a very large percentage of usage. And with just a 10% growth rate, nearly every category grew more than finance. The lack of natural engagement functionality could be one of the primary causes for this lackluster growth. 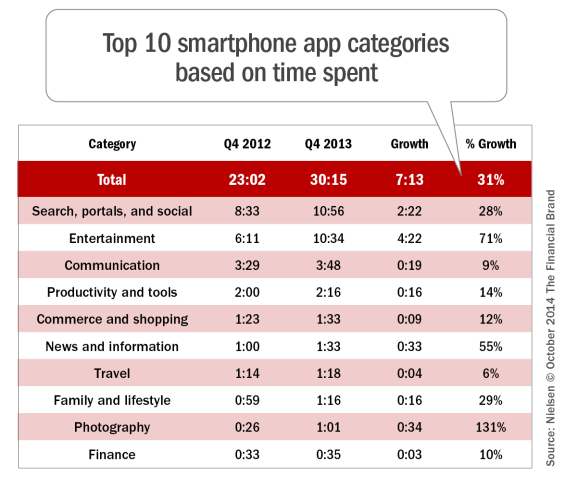 Venmo is a finance app, but its users would argue that it is more similar to the other top four ranking categories – social, entertainment, communication and tools – than traditional financial services applications (including PayPal). And, if Venmo continues to be used by more and more merchants, it will be similar to the number five category … shopping.

Despite having so many features housed in a single app, Venmo remains an extremely easy to use and functional tool to take complexity out of exchanging payments while actually making payments fun. 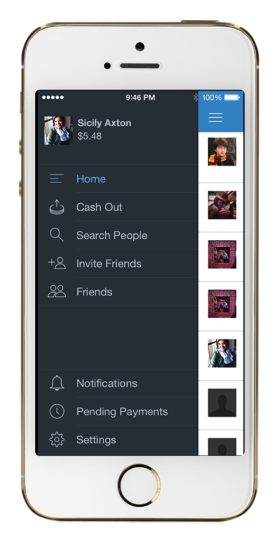 Just like scrolling through a Facebook news feed, other people on the app can see payment interactions between friends. It doesn’t show anyone else’s dollar amounts, but shows creative (and often very humorous) explanations written by the user and any likes or comments from others.

Like a status update, these transactions tell a story about what friends are up to – who went to dinner together, who shared an Uber, who got charged for Oktoberfest tickets, what couples are splitting the grocery bill, all mixed with more mundane explanations about which roommate has the water bill in their name. 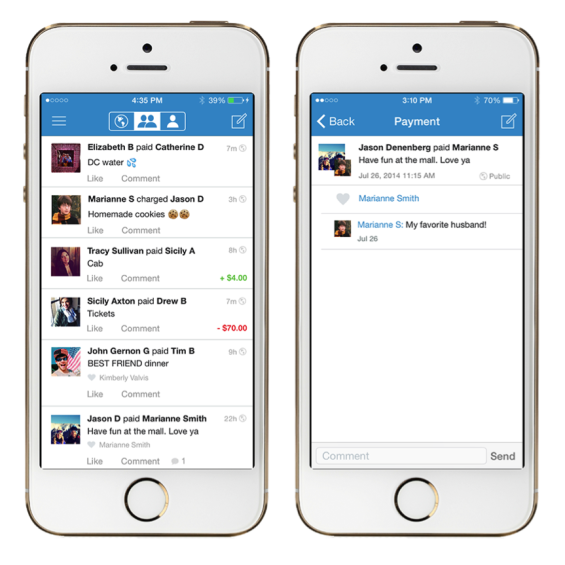 Each of those social payments on Venmo are one piece of a much bigger story. As friends document the transactions with each other in all kinds of ways – inside jokes, a series of emojis, etc. it takes the old fashioned ‘For:’ section of the traditional check to a whole new level.

When Venmo users log in to make a transaction, many find themselves staying a while – browsing their friends’ activity like one would on Facebook or Twitter. “It’s almost like the same thought that goes into sending a tweet goes into what you write for Venmo,” Keisha Follins, 36, told ABC News in an interview. “Because you know other people are going to see it and you want it to be amusing.”

“One of the reasons people prefer us, and will prefer us in the future, is just the fact that we are social,” said Venmo co-founder Iqram Magdon-Ismail. “You get more value out of sharing with friends.”

While it’s true that it’s mostly the college-aged and twenty-somethings who care to use the app now, how likely is it that Venmo will remain Millennial-only? And even if the application remains a Millennial favorite, the financial potential of this demographic segment is still huge.

Quartz best described the generational divide of users as the ‘Venmo line’ when it shared one of their internal online conversations on “what happens when a bunch of over-30s find out how Millennials handle their money,” particularly in reference to Venmo.

For people not familiar with Venmo, you may side with comments like:

“A 30-something takes a peek into the strange and unfamiliar world of how 20-somethings handle their money. Hilarity ensues”

For Users of Venmo, the logic goes like this:

“Like if my lazy roommate didn’t pay his hunk of the power bill, I can charge him on the app and it’ll push onto his phone. that’s more useful than the social part”

There may be a generational divide in Venmo users now, but start-up companies often find a way to gain popularity with this digital segment of young people before moving out into the masses. Facebook, for example, spent nearly seven years gaining traction among college students and young adults before it saw a significant increase in older age groups in 2011. Now in 2014, 35-54 year olds make up over 31% of Facebook’s users, the highest percentage of any other age segment. 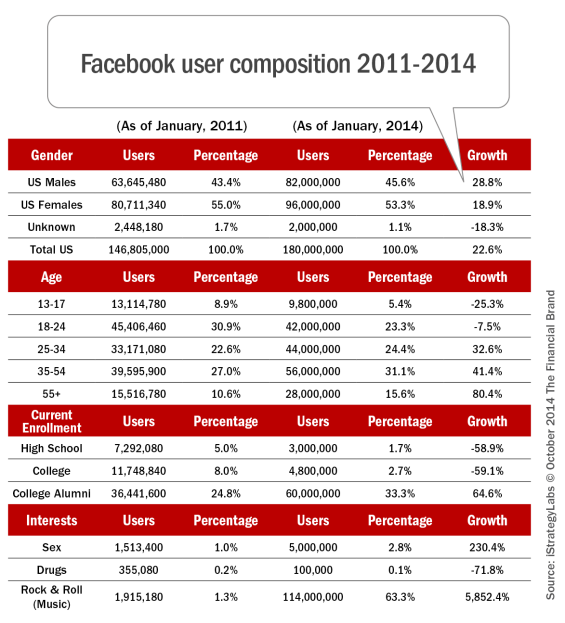 Venmo may be PayPal’s secret weapon to not only make themselves more relevant with millennial users now, but to eventually become the go-to payments app for other generations in the years to come.

Why Bankers Should Care About Social Payments

Co-founders Magdon-Ismail and Andrew Kortina began creating Venmo in 2009 because they discovered a weakness in banking – paying each other by writing checks is extremely inconvenient.

Fast-forward to today, and P2P payments are part of nearly every financial institution’s mobile banking platform. But how convenient have they been designed to be?

If a consumer is on the receiving end, and five different friends send them P2P payments from different banks, the user will have to add payment information five different times. With Venmo, a user registers just once and can receive money in one business day from anyone on Venmo, no matter what bank they use.

And in none of the traditional banking applications is the payments process engaging. A user makes a payment and it’s done. Place the ease of Venmo in the ring with other bank stipulations, and all bets are on Venmo to win the fight over payments engagement.

P2P is the ‘killer app’ in mobile payments because, unlike POS mobile payments, the value proposition compared to alternatives (cash and checks) is so much greater. And, as peer-to-peer payments grow more popular, they will benefit from the network multiplier effect – as more people adopt the app, the service itself becomes more valuable since a user can send money to more friends who have enrolled … therefore accelerating the growth of the service.

Simplicity of design, ease-of-use and social engagement are the primary factors that play a role in nearly every successful mobile app today. Just like the creators of Venmo looked outside of the banking industry for inspiration, banks should continue to seek out how people are already using popular apps today to get a better understanding of how mobile banking can impact a customer’s lifestyle in the future.

By the way, Venmo is a free app available for both iPhone and Android users.