Subscribe Now Get The Financial Brand's FREE Email Newsletter
PayPal CEO Dan Schulman says the company hopes to become the world's next banking 'super app,' with integrated mobile payments, shopping, investing, savings, budgeting and crypto capabilities all under a single platform, similar to AliPay in China. What does this mean to traditional banking organizations?

One of the biggest winners during the pandemic has been PayPal, as more consumers made digital payments to avoid physical contact, including the use of plastic cards and cash. In the most recent meeting with investors, PayPal stated that the high level of growth is expected to continue, with 750 million users by 2025, nearly doubling the current user base. Along with an impressive growth in users, PayPal forecasted a revenue growth rate of 20% annually over the next five years, and a tripling of payment volume.

More concerning to traditional financial institutions is the ambition of PayPal to become a “super app,” with capabilities to support payments, shopping, saving, investing and cryptocurrency support all within a single mobile platform. This expansion of services is expected to result in two-thirds of growth coming from current customers, with one-third coming from new users. 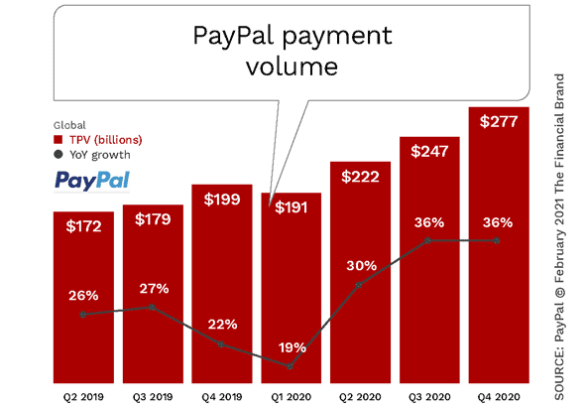 PayPal’s CEO Dan Schulman stated that most of today’s consumers have far too many apps to manage their daily lives, and that PayPal could be a platform that could integrate several disparate capabilities. “That’s really the promise of a super-app, where you can live a lot of your digital life on one app and then be able to manage all of your transactions in one place, track them all, and have personalized, customized recommendations,” he told MarketWatch.

The Threat of a PayPal ‘Super App’

The announcement and expansion of services by PayPal highlights the heightened battle for the consumer’s wallet that’s occurring between banks, fintech players like Stripe, Square and Affirm, as well as big tech companies like Google, Amazon and Apple. Each of these players wants to dominate your shopping and payment experiences.

“What a super app wants to do is turn all of those separate apps into a connected ecosystem where you can streamline and control data and information between those apps, between the act of shopping, the act of paying for that,” Schulman said. “And then you have this common platform and common data that allows machine learning and artificial intelligence to kick in and give personalized recommendations to those consumers.”

In other words, it all comes down to using consumer insights to drive recommendations and eventual shopping, payments and overall financial activity. And the consumer benefits because of the ease of engagement and the potential value of optimizing how money flows from one financial application to the other. This is where budgeting tools, rewards and alternative payment options come into the picture.

“We’re building our digital wallet into a super app that transcends across payments and financial services.”

PayPal intends to partner with other organizations for many of the traditional financial services, such as high-yield saving accounts, direct deposit, check cashing and investing, but the integration between these services will be seamless, according to Schulman. While traditional financial institutions have been the foundation of many of these services in the past, consumers are becoming less loyal.

In fact, according to research done by PYMNTS, the one-third of consumers who said “sign me up” when it comes to super apps said they’d trust Google (45%), followed by Amazon (29%), Apple (27%) and PayPal (22%) to deliver that experience. So, while consumers are open to the simplicity of a super app, PayPal still must compete with formidable big tech players.

PayPal’s decision to open its network to Bitcoin last October helped the company attract new users as well as greatly increased activity. PayPal found that half of all customers who used the crypto feature logged into the app several times every day. This activity can result in a “halo effect” across other services offered by PayPal.

Beyond what was announced by PayPal, new services are also in the works for Venmo, which is owned by PayPal. This expansion of services is important to note because, while Venmo represents close to one-third of PayPal’s users (at 65 million consumers), it represents only 4% of PayPal’s revenues. The monetization of services is a prime focus for PayPal, with the user base of Venmo being both younger and slightly more affluent than the typical U.S. consumer. 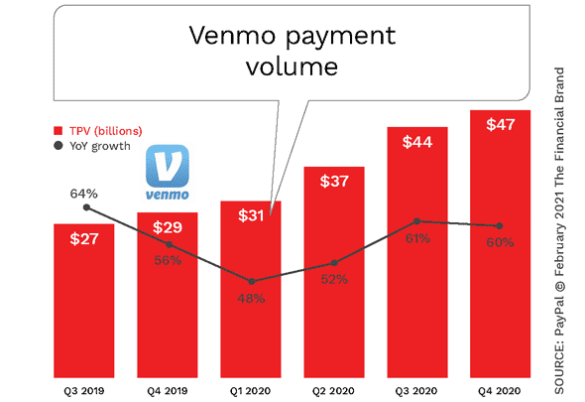 According to recent announcements, Venmo plans to launch new features including:

According to the Venmo User Behavior Study, commissioned by PayPal, the current Venmo user is prized in a payments marketplace that is getting increasingly competitive. The research found that: 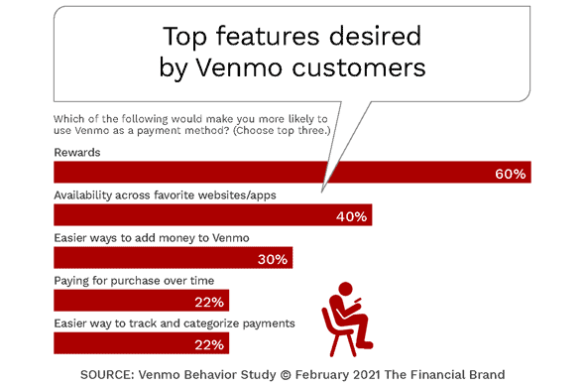 PayPal: A Force to Be Taken Seriously

While the growth of the PayPal platform was significant before the pandemic, few firms were better positioned to benefit from the shift to digital than PayPal. Not only are they used by 80% of retailers, but consumers prefer the PayPal and Venmo platforms as well.

During COVID, PayPal has been one of the most aggressive fintech players, offering services such as PPP fund distribution and buy now, pay later (BNPL) financing. PayPal’s almost immediate response to small business and consumer needs took business away from slower traditional banking organizations.

For instance, with the PayPal Cash Card, small businesses could receive, spend, and withdraw PPP funds all within PayPal’s platform, without the use of a traditional bank account or in-person interaction. PayPal also waived merchant fees and allowed for the deferral of loan payments to assist merchants.

PayPal’s ability to be agile and pivot to the needs of the consumer and small businesses within their existing (and very familiar) platform sets them apart from traditional financial institutions.

The firm’s introduction of its own BNPL function allowed PayPal users to finance their purchases in six installments, competing with fintech firms such as Klarna, Afterpay, and Splitit. Unlike alternatives, the PayPal option is built into an ecosystem that already exists as opposed to requiring an new app download or sign-in.

Finally, PayPal was one of the first payment players to offer a QR code payment option, enabling a consumer to simply scan and pay for merchandise. This contactless payment option is integrated within the familiar PayPal app as well as with Venmo credit cards.

With the expansion of the PayPal and Venmo user bases continuing to grow and expand their engagement with these powerful brands, the potential to become the consumer’s primary financial institution can’t be ignored.