Subscribe Now Get The Financial Brand's FREE Email Newsletter
With its new mobile banking app tailored to tribal economies and social activities Totem hopes to build an income stream beyond the interchange income that sustains many challenger banks.

The seed for a new neobank devoted to the needs of Native Americans was planted a few years back when co-founder Amber Buker tried to buy a house near Nashville.

Buker, a member of the Choctaw tribe, was a bit short on her downpayment and discussed options with her mother, who suggested she contact the tribe. She was sure that among its benefits programs something could help with downpayments on homes.

“So I called up the tribe and the person on the other end of the line had no clue. I ended up calling around and leaving voicemails for all the wrong people for over a week,” says Buker in an interview with The Financial Brand. “Finally I talked to someone who knew about the program. But she couldn’t explain it that well. Between the two of us we couldn’t figure out if I qualified and what the next step was.”

Her bank’s mortgage loan officer declined to help her and Buker’s home-buying opportunity slipped away. Several years passed during which Buker — who until recently worked for Alloy Labs Alliance, a fintech/bank innovation lab — witnessed the proliferation of fintechs and neobanks. Yet no one was creating one for Native Americans, says Buker.

It hit her: “We were at a point where technology had reached the level of ubiquity and affordability that would permit me to build the kind of bank I had needed.”

In mid 2022, she and Richard Chance, a member of the Cherokee tribe, co-founded Totem, a neobank designed to serve the needs of the growing Native American market with a twist that’s unique among challenger institutions. Buker is CEO and Chance is Chief Technology Officer.

Interestingly, neither founder’s tribe includes totems in their tribal cultures. But Buker explains that she and Chance wanted a name that would be a strong, identifiable symbol.

“When people hear the word ‘totem’, they make an association with Native American cultures and that helps us stand out immediately. It’s something that’s symbolically much bigger than any individual tribe,” says Buker. “Totems from cultures around the world tell the stories of the people they represent. And that’s what we want to do with Totem as a company — help our people rewrite the assumed narrative around Native Americans’ relationship with money.”

The U.S. government recognizes 574 American Indian and Alaska Native tribes. In the 2020 Census, due to improved counting and increasing numbers of Americans who identify as Native Americans to some degree, this segment grew overall by 86.5% over the 2010 Census. At 9.7 million people, this represents nearly 3% of the U.S. population — a sizeable niche.

Of the rest, many bank with large national financial providers, but, adds Buker, not happily. They tend to pick large players for their apps or their ATM networks, she explains.

Chance says many Native Americans have trouble trusting mainstream banks. One reason is due to alleged lending discrimination that has led to federal fair-lending settlements.

“There’s a toxic narrative out there that Native people are bad with money or that they just don’t care. And that’s not true.”

She points out that in Native American culture money has come to be equated with “medicine” to improve tribal members’ lot. She adds that many tribes have an entrepreneurial bent that results in many tribally owned industries. A familiar example is gambling casinos. Less well known are industries as diverse as printing and publishing, resource extraction, clothing and jewelry, food products, tourism, defense manufacturing, ownership of franchise restaurants, farming and ranching, and much more.

There are actually Native American owned-banks as well as some credit unions and community development financial institutions devoted to this segment — about 32 all told, according to a recent count. In fact, Totem will be working with at least one.

So why the need for Totem? The challenger’s slogan is “Digital banking for natives,” and that’s a key part of the reasoning.

“They are great institutions but they are a very small percentage of the overall banking population,” says Buker. Many were formed to provide access to capital for the tribes that own them.

“Typically, though, native-owned banks have very small branch networks, which limits them geographically,” says Buker. “And while they sometimes provide an app for their local customers, they’re just not focused on providing national reach.”

Buker explains that many of the Native Americans surveyed told Totem that if they could offer as good an app as the large institutions they banked with, they would prefer to work with a Native American-focused brand.

A Neobank with a Very Different Revenue Stream

Totem stands out from many other neobanks because of how Buker and Chance plan to generate earnings. Many depend heavily on the interchange income from their debit or credit cards. Totem plans to offer a debit card as well as a credit-builder credit card, but that won’t be its sole means of support.

Many tribes offer extensive benefits programs to members coming to millions of dollars in some cases — remember Buker’s quest for that downpayment — but running those programs can present challenges for tribes. The challenges include making benefits easy to find, and some are on the back-end, getting funds from tribe to member in the most efficient and least-expensive way.

Totem hopes to work with numerous tribes to bring their benefit lineup into the app itself, as illustrated in the photos below of the prototype. 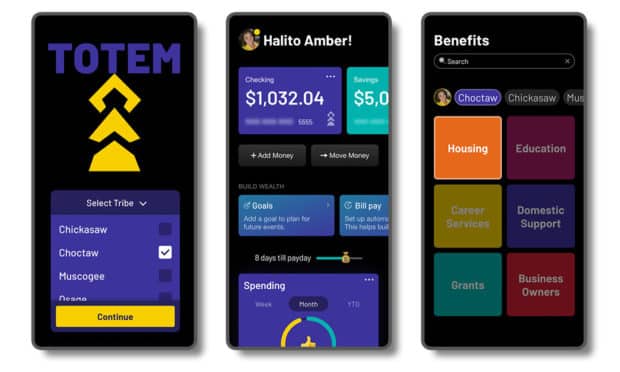 Features will include direct deposit of benefit funds into the Totem app. The plan is to also offer assistance with other tribal payments. The exact fee structure that will apply has not been determined yet, as in summer 2022 Totem was still in negotiations with the first group of tribes approached.

Initially the Totem app will begin with a checking account and debit card plus the credit builder product, according to Buker. Where it has made arrangements with a tribe, the hope is that those deals will be seen as an endorsement and that this will help overcome any trust issues. Tribes that enter into benefits and payments deals with Totem will help the neobank promote usage to tribe members. Buker anticipates that the app will be listed on the App Store and on Google Play beginning in January 2023.

Part of the long-term goal for Totem will be to use its website and other outreach to highlight Native American cultures and entrepreneurship. Social media marketing and alliance with some Native American influencers is part of the promotion plan.

Grassroots marketing efforts will also be a major thrust. Many Native Americans attend tribal pow-wows, where dancing, music and culture take center stage. Exhibit areas and other opportunities will give Totem a chance to reach many potential customers face to face. Buker expects to spend a good deal of her time at pow-wows, promoting Totem.

“It’s all about being present and having that credibility,” Buker explains.

Totem plans to add a pow-wow finder function to its app to enable users to see upcoming events.

The high inflation and concerns about a recession in the summer of 2022 could actually benefit Totem.

“From a customer perspective, this will be an opportunity for us,” says Buker. She says these conditions will likely drive people to take a closer look at their affairs and that this will help Totem attract Native Americans who want to improve their finances.