Subscribe Now Get The Financial Brand's FREE Email Newsletter
First-stage neobanks like Chime aim for big run-ups of customer totals. Second-stage challengers tend to drill into narrower niche plays where deeper knowledge can help them scale. Here's how 'Cheese' targets the Asian-American immigrant market, and lessons learned on the way.

Technology is singled out as the big reason for the rise of fintechs and neobanks. But that’s rarely the case. The real reason is usually quite personal — typically a frustrating experience dealing with mainstream banking services.

Consider the struggles of Ken Lian, CEO and Co-Founder of Cheese Financial, a specialized neobank.

Lian immigrated to the U.S. from China as a student. As he attempted to obtain credit and other financial services, he ran into data issues right off. Lian’s given name is not Ken, but Runxiong. Americans had trouble parsing that. Some people thought his first name was “Ron,” direct marketing programs addressed him as “Run Xiong,” and a key credit bureau mixed up his records as a result of misunderstanding his name.

Lian’s problem is not unique. Many Chinese immigrants to the U.S. have a “Chinese name” and an “American name.” Sometimes they bear a resemblance to each other, but sometimes they are quite different. Establishing financial records can be difficult.

Similarly, opening even a simple banking account can be difficult to impossible for people who lack a Social Security number or little or no credit history.

Even though there are many Asian-American-owned financial institutions, being part of the traditional banking system, they tend to think like bankers, Lian states.

Indeed, sometimes language itself can be a difficulty, even when the banker and Asian-American customer are using the same English words. Lian says that words can carry different connotations or nuances.

He gives another personal example to illustrate this.

“When I first came to the U.S., I wanted to take some money out of my bank account,” Lian recalls. “The teller asked me how much money I wanted to withdraw. But ‘withdraw’ can have several meanings and to a Chinese-American it can mean ‘retreat’ and that makes things confusing.”

And common U.S. financial shorthand, like “401K,” can be completely lost on many Asian immigrants, he adds.

Shared experiences like these led Lian to believe that a challenger bank focused on Asian-Americans’ difficulties navigating the U.S. financial system could take off. As of June 2022 — 15 months of operations — Cheese Financial has brought in over 100,000 customers.

Cheese Financial debuted in March 2021, with Lian and fellow co-founders, including Zhen Wang and Qing Yi Li, partnering with Coastal Community Bank, a banking as a service provider. Coastal is working with roughly 28 challenger banks at different stages, including several serving specific ethnic, racial and religious special markets. Other examples include Greenwood, aimed at Blacks and Latinos, and Fair, a halal-certified neobank and wealth building digital platform that follows Islamic financial principles.

The majority of Cheese users are first- and second-generation Asian-Americans who have settled in the U.S., as well as students. However, Lian adds that a significant number of Hispanic customers have been attracted to the challenger bank’s offerings.

Pivoting to Plan B:

When the co-founders initially conceived Cheese — the term is vernacular for money — they hoped to introduce a credit-oriented product first. They ditched that plan.

Lian says experience quickly taught them that getting a credit card program off the ground first would be difficult, because it demanded making connections with multiple vendors and with the three national credit bureaus before anything could be offered. Instead it made more sense for a startup to set up deposit-side services. Lian says development of the Credit Builder account, which has a waiting list, continues and that Cheese hopes to launch it in the near future.

Cheese began with a two-fold purpose. First was to create services that could be accessed by consumers facing the types of challenges outlined earlier. Second, Lian and his co-founders set out to design products and approaches in a way that would specifically serve the needs of Asian-Americans as individuals and of the Asian-American community at large. 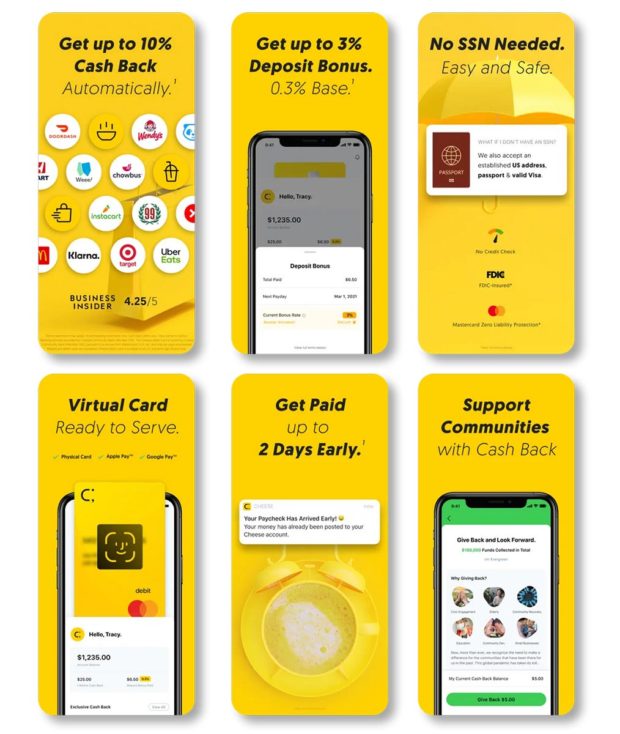 Regarding the first goal, the company launched a transaction account that can be accessed by both physical and virtual debit cards. Among the features are early wage access for qualifying customers and no banking fees. Users can obtain cashback on purchases at as much as 10%, with Cheese providing a small basic cashback amount and participating merchants offering more on top of that. Tapping past experience with other fintechs, the founders have already arranged a network of over 10,000 merchants, many of them Asian-owned businesses and restaurants.

While the co-founders had to work to set up arrangements with national brands, Lian says that “most of the smaller merchants come to us, because they want to be part of the ecosystem.”

The Language of Money:

Regarding the second goal, serving the immigrant community, a special element in the neobank’s launch was creation of the Cheese Giveback Fund, a $100,000 pledge towards aid to Asian-American nonprofits, communities and businesses. Beyond the company’s own payments toward the pledge, users can direct that their signup bonus as well as their cashback amounts be donated to the giveback program. Lian says about one in ten customers are donating their cashback proceeds to the fund.

In October 2021 Cheese announced that it would begin accepting alternative forms of identification, to serve people without Social Security numbers. Instead, passport and visa information can be accepted.

The Lessons a Neobank Learns on the Way to Growth

The script for fintech players is supposed to be one big swooping upward curve, but Lian freely admits that some painful lessons were learned in the early days for Cheese. In fact, early success was deceptively seductive.

“We lost focus for a while. Many users came to our products, because of the value. We got overwhelmed, and began thinking, ‘Wow, everybody loves our products’.”

The team began thinking bigger and more grandly than in the original plan. Lian says this distracted the company from its original goals and some original customers began to make it clear they were unhappy.

“We did a lot of customer interviews and we found out that we can’t provide a product that everybody will love,” says Lian. “We found that we can only support our core users. As a result we decided to switch back to a very focused mode of helping minorities.”

Elaborating, Lian says management was forced to realize that it was a startup with limited resources, after all. Down the road, perhaps there will be room for a broader approach, but for now Cheese is sticking more closely to its original course.

Going forward, Lian thinks the current inflation and resulting economic issues will be a testing time for Cheese and other fintechs as investors rethink their goals and priorities.

The Challenge of Marketing a Niche Bank

Some larger neobanks invest huge amounts in digital advertising and even the likes of Super Bowl commercials, but for Cheese seven out of ten customers inquire about accounts are based on word-of-mouth, according to Lian.

Digital marketing plays a role for Cheese, but somewhat differently than for many other companies. Lian says that the company uses search engine marketing, but taps providers beyond Google. Because it is trying to reach immigrant communities, he says, it can buy keywords in those languages at a much cheaper rate than it could buy them for in English.

Partnerships are also helping to spread the word. One special opportunity is for a very atypical 15% cashback promotion for debit purchases with an Asian food delivery company called Hungry Panda.

Such arrangements are supplementing interchange, the main source of income for Cheese at present, through referral fees and similar arrangements. Another such deal is with Prizeout, a gift-card provider that adds bonuses to the basic card for depositors who make their withdrawals in gift-card form.

“We hope more diversified revenue streams will help us get to self-sustained status faster,” says Lian.