Subscribe Now Get The Financial Brand's FREE Email Newsletter
The neobank's founders exploited a hole in the fabric of Brazil's traditional banking system, in which millions of underbanked people didn't have access to the financial tools they needed or were paying exorbitant fees for them. Now Nubank is one of the top digital banks by users. Here's what other institutions can take away from its remarkable success.

When a digital bank achieved a larger online presence than Bank of America, it should have created a massive buzz in banking. The only reason that didn’t happen with Nubank, at least in U.S. banking circles, is because the neobank doesn’t yet operate here.

Founded in 2013, Nubank has garnered an incredible following. The digital bank has 48.1 million users — a number that exceeded Bank of America’s total until early in 2022 when the $3.1 trillion megabank caught up. That makes Nubank one of the largest neobanks in the world by number of users.

But that’s not all the Brazilian-based digital bank has going for it. It is also the biggest neobank by market capitalization in Latin America, according to Reuters, having listed on the New York Stock Exchange in December 2021. It’s now worth more than $40 billion and has the support of some of the biggest backers in the market — including Warren Buffett’s Berkshire Hathaway and SoftBank Group. 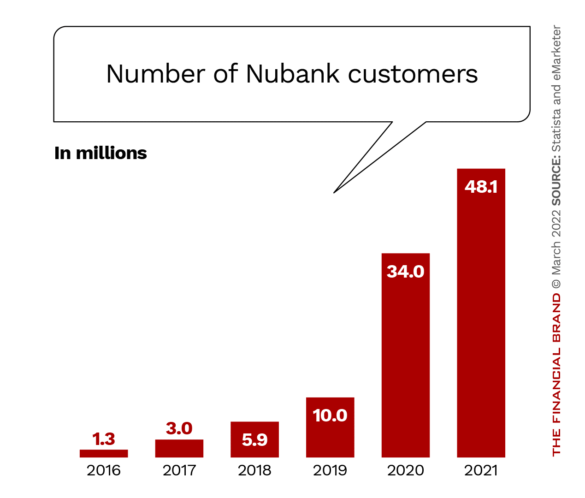 What makes Nubank’s rise to the top of the neobank pack especially remarkable is that it has done it without expanding globally. Revolut, with 18 million customers, operates in multiple countries, while Nubank only offers banking services in three — Brazil, Colombia and Mexico.

So far Nubank really doesn’t need to expand into other areas yet. The digital bank has plenty of runway left in Central and South America. It’s remarkable success boils down to its leadership team and their singular focus on the strategy that got Nubank off the ground.

Dig Deeper: The Most Popular Digital-Only Banks in the World

A Look at the CEO Who Built the Top Neobank

Many neobanks out there have a now familiar story: They want to serve a class of customers that can’t get what they need from a legacy financial institution. And they’re faster and more agile than incumbents because of their digital dexterity and youth-driven mindsets.

Nubank, possibly more than any other digital bank, can say it does this and more. 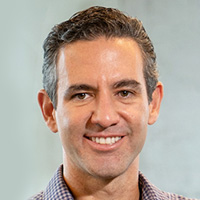 Nubank’s mission really boils down to the mission of its CEO and founder, David Vélez. Vélez was born in Colombia. His family fled to Costa Rica when he was nine, to escape violence caused by warring drug cartels.

The tumultuous nature of his childhood didn’t hinder his drive to learn. He attended a German-language high-school, but unlike Mark Zuckerberg (who jumped right into developing Facebook at age 19), Vélez earned an engineering degree at Stanford University.

Before he returned to Stanford to get his MBA, he added to his resume valuable experience at Morgan Stanley where he was an investment analyst. He also spent three years as a senior associate at General Atlantic before working at venture capital firm Sequoia Capital.

Upon his return to South America, he found an oligopoly of banks in Brazil — five big banks controlled four-fifths of the market. This situation resulted in radically high fees for many average consumers and a large unbanked population. His mission became helping to alleviate this disparity by creating a digital bank with little to no fees and easy-to-access banking features. To accomplish this, Vélez nabbed Cristina Junqueira from Itaú Unibanco, the largest bank in Brazil. He also brought on board Edward Wible. Both hires are co-founders. Almost a decade later, Nubank’s staff has grown to over 3,700. 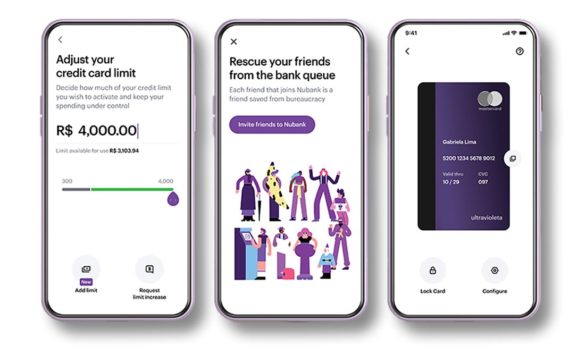 When Nubank first opened, it only offered a credit card — one of the only financial products not requiring a banking license in Brazil. Over time it gained a bank license and now offers these products:

The digital bank doesn’t charge account maintenance or overdraft fees because they are “against charging you to manage your own money,” according to its FAQ page. The only fee it does charge is to enroll in Nubank’s rewards program.

The broader range of products are part of the digital bank’s success, but analysts note that they are not the only reason Nubank is performing so well. They point to its unconventional marketing methods and its approach to serving undervalued populations as additional reasons why the digital bank is so popular.

As Rachel Green, research analyst at Business Insider, notes, “incumbent banks’ dominance and soaring fees have made financial services inaccessible to many Brazilians, and trust in banks is low.” This created an optimal opportunity for Nubank.

Within a few short years of it launching, Nubank established itself as a bank of the people and quickly developed a reputation catering to Brazil’s underbanked population of 55 million. By September 2020, it was adding upwards of 41,000 new customers daily.

Green points out there are two primary factors which contributed to this “explosive growth”: Nubank’s early entrance into a market that was just warming up to fintechs, and the fact that not a single cent was spent on traditional marketing methods.

Other American digital banks have utilized social media ads and influencers to pump up their branding (i.e. Current and Aspiration). Yet, as Vélez has emphasized many times, Nubank relies “solely on word of mouth.”

Out of the Ordinary:

Even digital banks — which have a heavy online marketing presence — use word of mouth. Nubank in particular relies on it for its entire marketing strategy.

“The neobank instead dedicates those marketing dollars to superior customer service and ‘great salaries’, which then feeds into more word of mouth,” Green explains. “Neobanks generally spend far less than incumbents on customer acquisition costs. But without spending at all on marketing, Nubank has had the flexibility to invest further in other growth areas.”

Now active in Brazil, Mexico and Colombia, Green expects Nubank will expand further in Latin America. “Nubank likely won’t rest on its laurels when it comes to future growth, despite its massive scale. But in the near term, it should prioritize driving more value from existing customers,” Green suggests.

Even as a primary competitor in Brazil’s banking market, Nubank still contends with much larger incumbent institutions — which Beales notes “makes 10 times as much revenue per customer,” putting pressure on Nubank to add more consumers to its books.

“That’s a source of top-line growth, but forcing rivals to compete could reduce that potential as well as slowing its customer growth,” Beales observes. The popularity of the digital bank’s products have also attracted a collection of fintech competitors vying for the same space, such as Wise, Original and Next.

Additionally, there have been weaknesses in the digital bank’s financial reporting processes — which Nubank’s own team has acknowledged.

These headwinds have yet to hold Nubank back. Not even the unpredictability of Brazil’s economy seems to rattle Vélez, who has pointed out his neobank does not rely on the same credit reporting standards that legacy banks do to turn around personal loans, giving them a competitive advantage.

“We have been telling investors to expect volatility. Brazil and Latin America are volatile,” Vélez told Reuters.

Should U.S. Banks Be Concerned?

For now, Nubank has not initiated a strategic move toward the U.S., home to big players like Venmo, PayPal and Block (Square), or toward European markets where neobanks such as Monzo and Revolut have staked their claim to fame. However, Nubank’s founders still have plans in the works for its future, one of which may be surprising to some.

The digital bank is considering a physical retail presence. Vélez believes launching a branch network might be what his customers soon need — specifically for higher value products, such as mortgages.

“Eventually, if we want to go through on certain segments, we might need to consider having some kind of offline presence to be able to serve our customers better,” Vélez told Reuters.

What to Watch For:

Nubank's CEO said branches could ultimately be a part of the digital bank's trajectory.

In addition, in Mexico — where up until now Nubank has only offered its credit card — the bank is looking to begin lending to customers after earning regulatory approval to acquire lender Akala.

Even if this wildly successfull digital bank doesn’t present an immediate threat to American financial institutions, both digital and traditional institutions should keep their sights on Nubank, if not as an immediate competitor then as a source of ideas and inspiration.