With all the talk about non-bank competition, it is not hard to imagine the discussions that are occurring in banking and credit union board rooms around the country as to whether tech giants like Google, Apple, Facebook and Amazon may become banks.

On one side of the table are the legacy ‘career’ bankers or credit union executives, who realize that becoming a ‘bank’ is much harder than simply hanging a shingle with the words ‘Google Bank’ or ‘Facebook Financial.’ On the other side of the table are the younger bankers who realize that, with new technology and without the need for bricks and mortar, the barriers to entry for many banking services, such as payments, are lower than ever. So, who is right in this argument? Are the fears (or complacency) justified?

The biggest advantage the tech giants have is their huge customer databases. While it is difficult to determine exactly how many customers each tech giant has, these numbers provide some perspective.

When discussing non-bank competition, we could also include Paypal, with 152 million active registered accounts processing 9.3 million payments every day, T-Mobile, with 50 million customers, 70,000 stores and 40,000 fee-free ATMs in their T-Mobile Mobile Money network, and other players like Simple (acquired by BBVA), Moven, or Walmart.

‘Becoming a Bank’ is a Legacy Mindset

While the ownership and structure differ significantly, banks and credit unions are financial entities that accept deposits and provide loans for individuals and businesses. Highly regulated, with significantly higher distribution costs than high tech or digital firms, most financial institutions offer a very wide variety of financial services through multiple distribution channels. Bank and credit unions also need to adhere to capital requirements and manage risk and defaults to stay in business. In other words, the two key hurdles to enter the banking industry in the traditional manner include:

As referenced in the Forrester report, Why Google Bank Won’t Happen, each of the high tech players has unique strengths and growth plans which more or less correlate with financial services. The problem is that a legacy mindset towards banking makes many banks and credit unions vulnerable to disruption.

“Digital disruptors like Google are disruptive because they don’t play by the rules. Instead, they use digital technologies to deliver better or entirely new ways of meeting customer needs … often bypassing regulation and redefining a given industry in the process,” states Oliwia Berdak, Forrester analyst and author of the report. “In retail financial services, developing a better global payment network, providing affordable financial advice that millions of customers desperately need, or simply getting access to transaction data are all sufficient motivations for firms like Google or other high tech companies to get involved,” Berdak continues in her blog post.

“Google, Apple, Facebook and Amazon don’t want to get into the business of banking,” stated Brett King, who founded the first direct mobile-only bank, Moven. “These firms will increasingly be in the business of selling banking products, apps and services to consumers in an effort to maintain acquisition traction. And they’re going to be looking at owning more and more of the payment process (before, during and after a transaction) because of the opportunity for high-frequency, low-margin revenue and the ability to capture purchase behavior insight.”

And, while the Chairman of BBVA, Francisco González, recently declared, “Banks are losing their monopoly on banking,” some like Phillipe Gelis, CEO at Kantox, think that there is a big difference between offering specific financial services and being a bank, as he stated in the LinkedIn post, “Why Tech Giants (Google, Apple, Amazon, Facebook …) Will Probably Never Become Banks”.

The Real Threat To Banks and Credit Unions

As we have seen in the past, by eliminating inefficiencies and transactional friction, high tech competitors can ‘eat away at the edges,’ delivering a select group of traditional services such as merchant services for small businesses, payment services and even checking accounts (in the form of prepaid cards) directly to consumers and businesses. For many of these segments, the new products are lower cost and can provide a better experience. Continuation and/or expansion of this trend could relegate traditional banks to being nothing more than processors of transactions.

Of even greater concern could be how Google, Apple, Facebook and Amazon integrate and leverage their traditional products to create new customer value in financial services that goes beyond payments. For Google, this could be their mapping or email capability. For Apple, it could be their Passbook product or mobile security. For Facebook, the context of social communication. For Amazon, it may be their digital store or even their new mobile devices.

Since each of these firms already use vast customer insight to provide contextual solutions, the logical next step is to use this same insight, combined with transaction behavioral data, to deliver highly personalized financial advice and solutions. In the process, while banks and credit unions may still have credit or debit card accounts associated these high tech solutions, the big data behavioral insight that traditional financial institutions are used to receiving with transactions would not longer be available. Gone would be the what, where, when and how of payments insight.

In other words, the core of the customer relationship could be lost to the new high tech players unless traditional financial organizations can redefine their offerings and/or build partnerships with providers outside the financial services industry.

As mentioned in the Forrester report – it’s not another bank that people want – but these tech giants could easily become a financial services hub to facilitate the relationship between consumers and traditional providers of financial services. Unfortunately, while not wanting another bank, many millennials would be open to using one of the high tech giants as was covered in The Financial Brand article, The End of Banking as Usual. 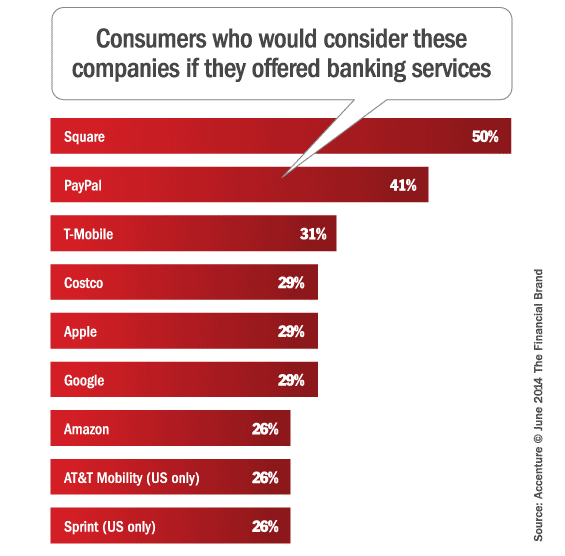