Neobanks have enjoyed a good long ride based on the special features and incentives they have offered to consumers. But as investor financing becomes harder to raise, that advantage may become harder to sustain.

“As the pressure to deliver investor returns ratchets up, neobanks with short runways may have to sacrifice the popular yet loss-making features that established them,” states a digital banking report by Insider Intelligence, “Spotlight: U.S. Neobank Digital Trust 2022.”

“Neobanks have attracted popularity off the back of compelling, flashy and often very lucrative [for consumers] feature offerings that set them apart,” says Dan Van Dyke, Vice President, Content and Head of Financial Services at the research company. “Examples include overdraft cushions and high-yield savings accounts such as those offered by players like Aspiration or Varo.” As of late September 2022 qualifying accounts can earn APYs as high as 4% at Aspiration and 5% at Varo.

“Imperative #1 is to attract customers,” he says, “but imperative #2 is to exist. I would say between these imperatives, imperative #2 is more top of mind for neobanks at the moment.” Research on neobank financial trends by Simon-Kucher in 2022 indicated that most neobanks are not making a profit and could go under.

Given the decimation of valuations for fintechs of all sizes and types, including neobanks, continues Van Dyke, “the runways are very quickly looking like they might run out for particular providers.”

How Breadth of Features Factors into Consumers’ View of Neobanks

These observations are part of a broader Insider Intelligence study that the report is part of. The research ranks overall “digital trust” in 14 financial companies, including the ten largest U.S. consumer banks and four large neobanks, selected based on number of users. The six components of digital trust include: breadth of features, security, privacy, reputation, reliability and ease of use. 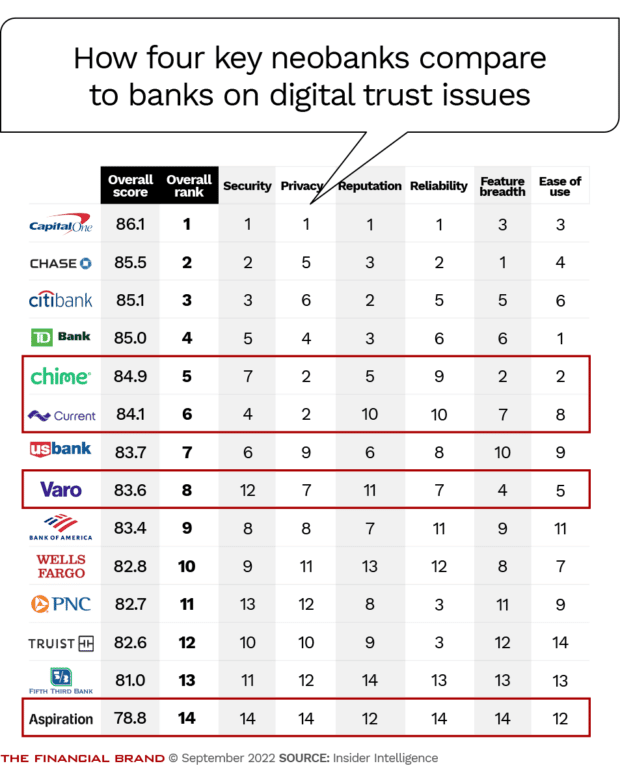 The neobanks chosen for the study include Aspiration, Chime, Current and Varo. Of the four, Varo is the only one to have a national banking charter. Van Dyke says the company decided to add the nonbanks to its study because of the scale the largest have reached.

“If you look at them through the perspective of number of users, they’re punching in more or less the same weight class as the tail end of the top ten banks,” says Van Dyke. Aspiration, which holds out a way to bank with no involvement in fossil fuels, for example, claims approximately six million members. Of the others, Chime claims 13 million, Varo 6.8 million and Current over 4 million.

Nevertheless, even for these large neobanks, offering unusual and atypical services isn’t a foolproof means to success. The report points out that despite the reputation for product innovation, only two of the neobanks did well in this category. 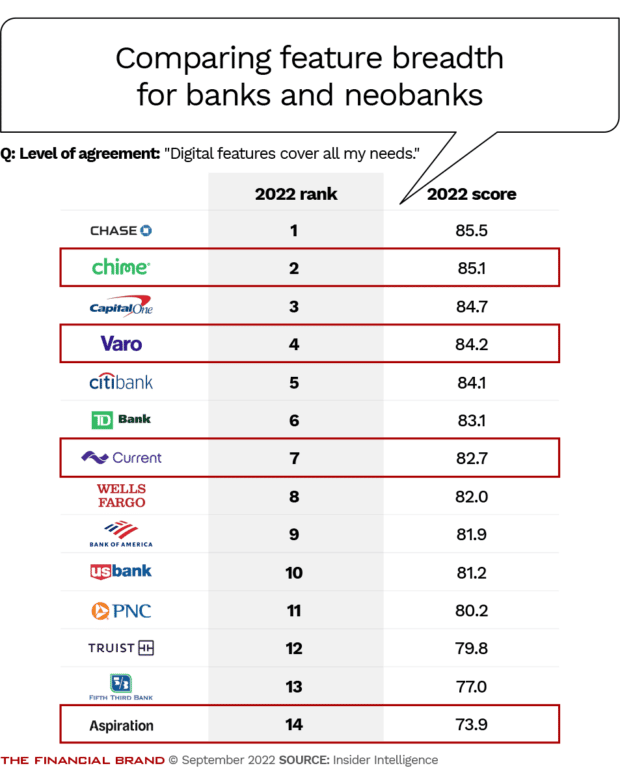 The neobanks have spent large sums on marketing to build customer bases but now the time has come to be more conservative, in order to survive, according to Van Dyke.

“If you are a neobank, you know what your burn rate is,” the analyst states. “You know how long you can survive based on current funding. You also know that it’s an extremely difficult environment to attract net new funding. So pivoting to sustainable growth is absolutely critical at this moment.”

Citing Varo as an example, Van Dyke points out that marketing budgets are under scrutiny and that growth will be sacrificed for stability. Squeezing more out of investments already made will be key for Varo, he suggests. The bank has put much money into influencer marketing and Van Dyke thinks much more can be gained from that investment than has been realized thus far.

Aspiration announced an agreement in the late summer of 2021 to be acquired by a “SPAC” in order to go public, but as of a year later, that deal had not been consummated. In late 2021 the fintech raised additional capital via other means. (SPAC stands for “special purpose acquisition company.”)

For any financial provider, shortening the list of features consumers get with an account is dicey. Yesterday's innovation is today's table stakes.

A Lesson for Banks in Digital Trust

In the first chart above, comparing banks and neobanks on digital trust, the top ranking of Capital One has something to teach banks, according to Van Dyke.

He explains that the bank suffered a major black eye in 2019 after a data breach impacting many credit card customers and card applicants. Van Dyke points out that the bank invested in features to protect customer data going forward that helped it to the top scores for security, privacy, reputation and reliability — four out of six digital trust categories.

“The takeaway is that you can shift consumer perceptions,” says Van Dyke, “but it takes a smart strategy.”

A good preventative measure on the privacy front is to consider the feelings of consumers about use of their information, including data that is not usually considered in the definition of financial data. This includes geolocation information.

Insider Intelligence research found that people appear to be less willing to surrender some privacy for the benefits of personalization, in spite of all the talk about that concept. 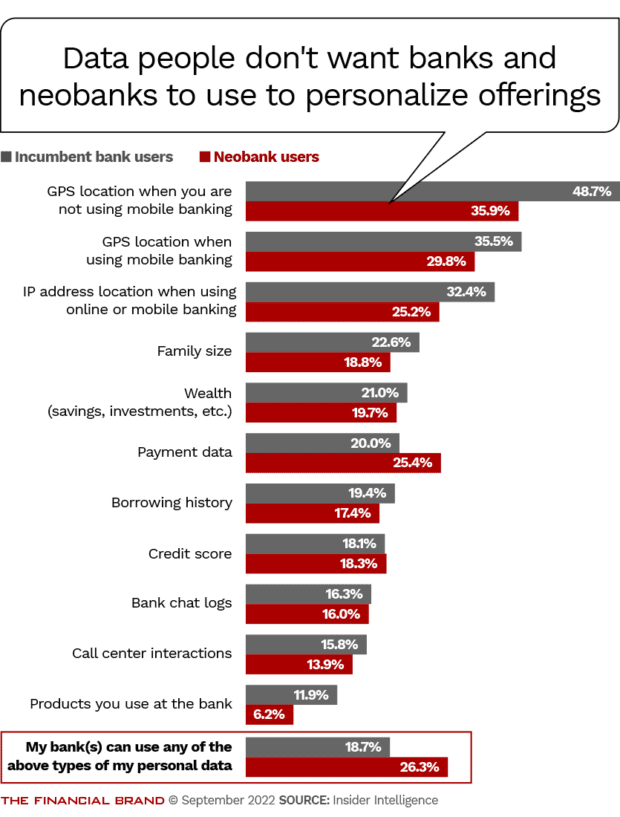 “Privacy is a new battleground for trust,” says Van Dyke. The report suggests that financial providers can gain both additional trust and appreciation of personalization efforts by increasing the human element in their digital services

Perhaps having a person involved removes some of the creepiness of the data glut that consumers appear to worry about.

Consider Staying Out of Crypto and BNPL

A couple of final nuggets of advice, based on what Van Dyke learned from the survey. While cryptocurrency is going through a “winter,” as some call it, banks may be tempted to try it anyway as things thaw. “Tread extremely carefully,” he advises, citing reputation risk and the consequent potential damage to digital trust.

“It’s not just because you need to be sure consumers can repay,” he explains. “You want to avoid being a Wall Street Journal story in 2023.”