Subscribe Now Get The Financial Brand's FREE Email Newsletter
Despite declarations of a funding bubble, money flowing into fintechs from investors rose at a record pace in 2021. Traditional institutions are responding in several ways, including getting into the action themselves as well as investing in their own R&D to compete. Potential headwinds may slow the money flow, and lower valuations could impact acquisition activity.

Predictions have been heard for years that the fintech funding bubble will burst. But so far it shows no signs of slowing down, at least through the beginning of 2022.

Investment in the fintech industry worldwide more than doubled in 2021 compared to 2020, according to CB Insights, with $132 billion raised over the course of the year. And this pace increased as the year went on: Q4 was the second-largest quarter ever in terms of fintech funding, with firms raising nearly $35 billion in capital. Additionally, one in every four unicorns (firms with a valuation of $1 billion or more) created across all industries in 2021 was a fintech. 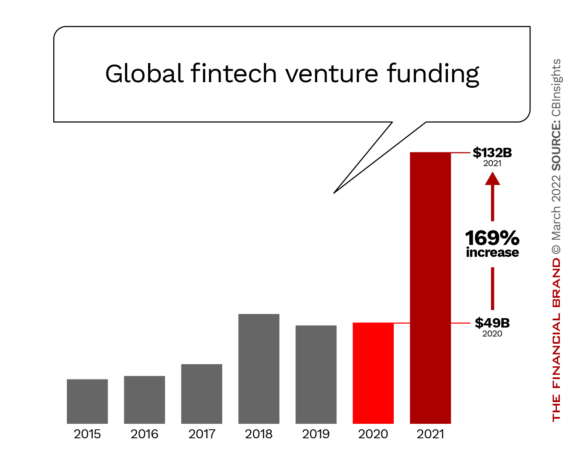 However, the outlook for fintech funding for the rest of 2022 may not be quite so rosy. While Insider Intelligence predicts an even bigger year in 2022, with funding levels topping $150 billion, other analyses point to a number of factors that may depress funding.

On the positive side, Insider Intelligence cites several factors as reasons for a continued fintech funding boom in 2022. Among them: investment in emerging areas such as open finance and blockchain, crypto exchanges raising an abundance of capital, and more large, incumbent financial firms investing in fintechs in order to help digitize their operations

Investment in crypto as well as government support will continue to draw money into fintech.

On the other hand, plummeting stock prices for many tech stocks in early 2022 could caution investors when it comes to funding fintechs. War and unrest in Eastern Europe could also play a factor

The continuing rise in money flowing into fintechs over the past year can partially be attributed to governmental forces. For example, the U.K. government has been very aggressive at promoting the country as a fintech hub and creating an environment that attracts funding and entices startups.

The Financial Conduct Authority, a U.K. regulatory body, created a sandbox that allows businesses to test innovative solutions in the market with real consumers. Deloitte notes that working with the FCA in this sandbox environment gives fintechs a greater degree of legitimacy with investors as well as customers.

A commonly expressed explanation for the rise in fintech funding during 2021 is that it was simply a reaction to the economy bouncing back after a Covid-depressed 2020. S&P Global Market Intelligence, for one, disagrees, however.

“The strong increase in fintech funding in 2021 was not simply due to favorable year-over-year comparisons coming off a slowdown in activity in 2020 during the height of the pandemic,” the firm says in a report on venture capital funding to U.S. fintechs. “Funding activity fell from March 2020 to April 2020 but quickly recovered. A look at just the fourth quarters of 2020 and 2021 echoes the full-year findings: The aggregate amount raised increased by more than 95% and the volume of transactions jumped over 40%.”

What the Funding Surge Means for Banks

Banks have long moved past the point where they dismissed fintech firms, and most now consider them a serious competitor for consumer customers, but also, increasingly, partners. These funding trends clearly show that money flowing toward the fintech sector is not going away anytime soon.

This poses a number of options for banks. One would be to be more active in funding fintechs so they can acquire new digital capabilities. While many larger banks are actively pursuing this strategy, medium and small-sized institutions are starting to jump into the fray.

“These smaller banks have come to realize that technology is critical to their long-term success,” National Law Review notes. “Many have ‘partnered’ in some way with a fintech company, usually to enhance the bank’s products, services, or operations, but sometimes to facilitate those of the fintech company. There is more and more symbiosis between the fintech and banking industries every day.”

“For a fintech company that needs growth capital, a bank may be a natural fit,” the article continues. “While banks are generally not in the business of making speculative investments, they can and do make investments in bank technology.”

Indeed, banks should not be looking at fintechs as competitors but rather as enablers and partners on the path to innovation, says Michelle Prohaska, chief compliance officer at cloud core systems provider Nymbus, writing in Forbes. This will naturally include investment in fintechs.

Financial Institutions React to the Trend

Another way banks and credit unions are responding to the rise in fintech funding is increasing their own R&D spending. While it’s true many fintechs are not direct competitors to financial institutions, some are taking aim directly at them. For example, SoFi, Varo Bank and Lending Club have all obtained banking charters by application or acquisition.

U.S. banks’ overall technology spending will continue to grow from $79.49 billion in 2021 to an estimated $113.71 billion in 2025, according to Insider Intelligence forecasts. This not only includes large banks, where tech spending and operations are “joined at the hip” with customer-focused digital teams, but smaller banks as well.

Community banks list neobanks such as Chime and digital payments providers like Block (Square) as top threats to their business.

Community banks nationwide are spending more on technology, according to a November survey from Bank Director, which notes that this is at least partially driven by competitive pressures from fintechs and other nonbanks. In some cases these competitive threats, from tech giants, retailers and digital banks were not a factor three to five years ago.

If not even a global pandemic slowed the spigot of money coming in to fintechs, can anything? There are some signs the industry could be facing potential headwinds.

“Many of the startups that have gone public since the start of 2020 are now trading below their IPO prices and, more generally, growth stocks appear out of favor with investors at the moment,” says S&P Global Intelligence.

Further factors such as escalating war related to Russia’s invasion of Ukraine and increasing inflation in the U.S. has lessened investor’s appetite to shell out big bucks. Chime delayed its much-anticipated IPO, with fintech stocks down 40% since Oct 2021, as of late February 2022.

“As fintechs stocks have slumped, some investors — especially those that place bets on both private and public companies — have started to demand lower valuations from startups,” Forbes notes.

However, if this trend does indeed play out it could be a boon for banks, which could pay lower prices in order to acquire fintechs as they build out their own digital capabilities.