Subscribe Now Get The Financial Brand's FREE Email Newsletter
IT-related expenses account for about 10% to 15% of financial institutions total expenses. However, many banks and credit unions question whether their investments in financial technology are providing a good enough return on investment. Are banks and credit unions destined to be usurped by fintechs with the capital and the know-how to reimagine banking for today's mobile-first world?

Financial institutions in the U.S. have — thus far — been able to stave off the threats posed by fintechs. According to a report commissioned by Citi, only about 1% of consumer banking revenue has moved to newer digital models. However, Citi predicts that percentage will rise to 10% by 2020, and 17% by 2023.

Citi warns that while traditional financial institutions may have the upper hand on fintech upstarts for the moment, they had better rethink their digital strategy before fintechs hit a digital tipping point that fundamentally reshapes the banking industry.

If things stay on the present course, Citi is betting that the most likely candidate to disrupt financial services in the U.S. is Amazon. At the same time, they also figure Facebook won’t pose much of a threat to legacy banking providers. 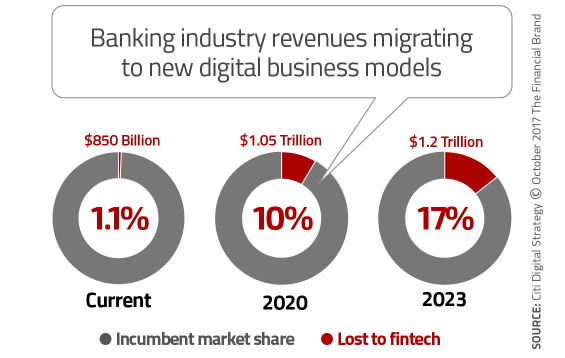 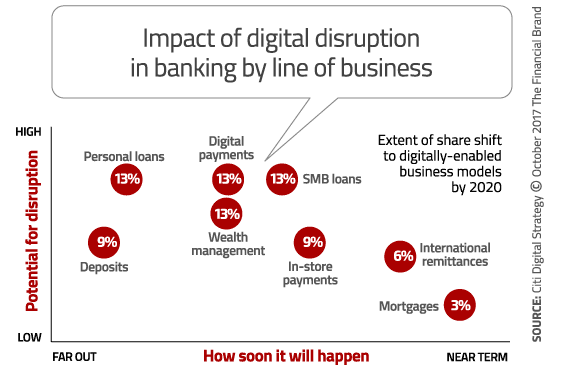 Where’s All The Money Going?

IDC Insights predicts that U.S. retail banks will spend more than $20.2 billion on hardware, software, services, and internal IT staff to develop and implement digital transformation initiatives. That investment will grow at an average compound annual growth rate of 22.5% into 2020.

At the same time banks and credit unions are pouring money into fintech, private investment in fintech firms is skyrocketing as well. While the growth in spending on digital channels by financial institutions sounds significant, investments by venture capital firms in the fintech space grew at 38% globally in the second quarter of 2017.

IT may take up to 15% or more of financial institutions budgets, but very little of that is actually dedicated to fintech innovation. Much of it is spent on bandaids and playing catch-up. There are plenty of reasons why banks and credit unions have to spend so much on maintenance, starting with their core systems. The typical financial institution is running on software that was originally authored almost 40 years ago; it needs so much TLC just to keep it running that it would probably make as much sense to just start over.

Alas, core conversions are painful — the most difficult project any financial institution will ever undertake — and the culture at your typical banking provider could best be described as “risk-adverse,” so the appetite for change is extremely low compared to the entrepreneurial spirit oozing around fintech firms.

And while these may seem to be valid reasons for not being able to invest in their own fintech innovations, Citi says these excuses obscure the dirty truth: most banking providers lack the skills and expertise to run large technology projects.

“There is no doubt that banks need to invest in IT to become more efficient through automation and digitalization, therefore there will be over the long term a reduction in staff expenses and an increase in IT expenses,” says the Citi report. “However, in the near term, there is often a double running of operating expenses from an increase in new development expenses and double running of legacy systems/processes, resulting in a near term higher cost level for banks.”

Who Are These Fintechs Anyway?

Jonathan Larsen, head of Citi’s Global Retail and Mortgage business, postulates that there are three types of fintech challengers with the potential to disrupt the banking industry:

Silicon Valley giants and VC-backed startups may be able to outgun financial institutions when it comes to capitalizing their fintech initiatives, but what they don’t have — and desperately need — is scale. They can innovate, but traditional financial institutions hold the high ground in the market today. They have a massive advantage with an established customer base and (at least for larger institutions) scale.

The main message in Citi’s analysis? Traditional financial institutions had better get the innovation riddle figured out before fintechs achieve scale. Or else.

Here are five ways Citi says that financial institutions can get more out of their fintech investments:

1. Ditch the three and five year strategic plans. In the world of technology, 3 years is a lifetime. By the time a bank or credit union implements technology, that technology is obsolete. Instead, strategic plans should be in months rather than years.

2. Think beyond partnerships with fintech firms. Financial institutions have been partnering with payment providers, funding P2P lenders, and leveraging white-labeled robo advisors. That’s all fine, but they need to take it further and share banking platforms with outside developers to create new applications and services.

In the U.S., banks and credit unions are often looking over their shoulders, waiting in fear that some fintech firm is going to move into their market. In China, that’s already happened. U.S. financial institutions only need to look across the Pacific to find a cautionary tale about the importance of defending their turf.

According to Greg Baxter, Citi’s Global Head of Digital Strategy, the U.S. and Europe is in the early stages of what he calls the “banking disruption cycle.” In China, new fintech companies already have about the same number of clients as traditional financial institutions, says Citi.

“The transition from physical to digital financial flows has been breathtaking in China,” Baxter marvels. “It’s a perfect storm based on fundamentally better products, experiences and distribution platforms, and driven by new digital communication and commerce platforms.”

China is well past the tipping point of disruption, notes Baxter. Top fintech firms in China such as Tenent, Ant Financial (which owns Alipay), and Lufax (lending) are stealing huge chunks of market share from banks. In fact, 96% of ecommerce sales in China don’t involve banks.

China’s third-party payment system is effectively a “banking system” that sits on top of the traditional banking system; an added layer between banks and the customer. Transparency of the transactions inside a third-party payment company say between a merchant and an individual is low and banks lose sight of customers’ transaction information and is thereby distanced from the customer relationship. Moreover, many third-party payment companies use payment as a gateway to get access to customers to gradually provide other auxiliary financial services such as deposit taking and wealth management. Payment gives them valuable access to customers and their transaction data.

Financially, banks face reduced fee income as the number of interbank payment transactions may be reduced – third-party payment companies have their own treasury and transactions can be netted off or grouped. Banks could also be forced to reduce or remove entirely payment fees. The bigger financial loss (since fees tend to be low for payments anyway) could be low cost customer deposit balances as they are no longer determined by the banks’ relationship with the customer but instead are driven by the designated partner banks by the third- party payment company.

And don’t think for a second that Google, Apple, Facebook and Amazon aren’t closely watching what the Chinese fintech firms are up to as well. They hope to learn from their successes and apply those to the U.S. financial services ecosystem.

“Only a few incumbent banks will have the courage and decisiveness to win in this new field,” says Antony Jenkins, former CEO of Barclays. “We will see massive pressure on incumbent banks, which will struggle to implement new technologies at the same pace as their new rivals. That will make it increasingly challenging for them to deliver the returns and profitability that their shareholders demand. Incumbents risk becoming merely capital-providing utilities that operate in a highly regulated, less profitable environment.”