Subscribe Now Get The Financial Brand's FREE Email Newsletter
Can a mobile app based on savings accounts that earn rewards train consumers to pay for things in ways beyond buy now, pay later services and pricey credit cards? One fintech thinks indulging people's secret savings habits can help both buyers and sellers.

Americans love shopping and typically don’t mind consumer debt in nearly every form, from big mortgages and large credit card outstandings to multiple buy now, pay later purchases. That’s the accepted norm and consumer debt figures support it. And yet, is there more beneath the surface? In his gut Michael Hershfield, a Canadian entrepreneur, thought so.

Hershfield, a veteran of WeWork, Sailthru and other brands, felt that many people save towards future purchases and that both retailers and financial institutions don’t always recognize that. He conducted consumer research indicating that among both higher- and lower-income strata a surprising amount of savings towards upcoming purchases takes place. Hershfield says over 60% of his sample are currently saving towards something they want.

Another factor Hershfield observed is how much ecommerce brands depend on big tech channels to obtain sales possibilities through paid search engine marketing.

In 2021 he put these points together to create Accrue Savings. The company uses banking as a service options through Unit Finance and Blue Ridge Bank to create dedicated savings plans consumers can use to save towards specific items sold on participating ecommerce sites. Accrue represents a potential new angle for BaaS relationships, and offers a model for both fintechs and banks to compete with the controversial BNPL service.

Saving used to be a selling point for traditional financial institutions. Will inflation and rising interest rates make it cool again?

What sets Accrue Savings apart for consumers versus simply budgeting towards their goals in their savings accounts or sugar bowls, or saving towards the holidays as consumers did decades ago via Christmas Club accounts? People receive cash incentives paid into their accounts by participating merchants, the amounts depending on the price tag of the given merchandise or services and the seller’s appetite for volume.

But what about the issue of instant gratification? Amazon’s Prime delivery didn’t become popular because consumers have patience.

It’s true, says Hershfield, that “we have built our culture around credit as the way to buy stuff.” But many people save towards purchases they know about yet aren’t ready to make yet, such as furniture for a room. In addition, he found in his research, increased use of budgeting and saving resonates among both high-income and low-income consumers.

And rewards for saving has broad appeal.

Accrue, which started setting up savings plans in 2021, is coming on stream as other trends are emerging. First, credit experts note that buy now, pay later companies have had to reduce the interest rate subsidies merchants pay, and that the “free” credit may soon have to carry a price tag to the consumer. Second, as interest rates continue to rise, credit card borrowing is growing more expensive.

How Accrue Works for the Consumer

Going to the Accrue website they can browse among merchants offering savings plans as an option. This is similar to the approach taken by Klarna and some other BNPL providers, which establish their websites as marketplaces. Clicking on any merchant on the Accrue site leads to several suggested purchases with potential savings plans, plus a link for further browsing on the merchant’s own site. Accrue offers an app for shoppers using mobile devices. 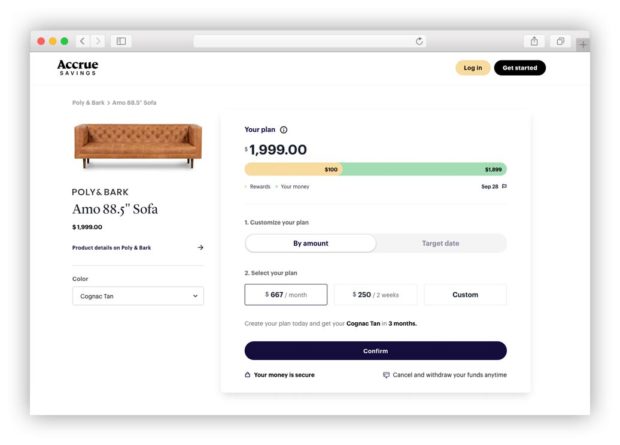 Consumers can also access Accrue services through the merchants themselves. How this route is presented varies according to each merchant’s strategy.

Some merchants use Accrue as a follow-up to abandoned carts or call center interactions where a consumers makes it plain they can’t afford the price at present. Accrue is offered as an alternative to a purchase on credit.

Other merchants offer the service in their email promotions, while still others put Accrue on their websites. Some, such as Casper, the mattress company, and American Signature, the furniture company, feature Accrue prominently. The former promotes with a pitch toward the bottom of its home page, while the latter includes it on a page promoting multiple ways to pay over time for furniture (see below).

You’ll note that no one offers Accrue at checkout — and that’s by design.

Going back to the issue of instant gratification, Hershfield explains that “we don’t compete at the point of checkout because if a consumer wants to buy today, they’ll buy today.” Naturally, merchants would prefer to sell when someone is ready to pay and receive the goods or services.

Hershfield sees the role of a savings plan coming earlier in the marketing funnel, when consumers are still shopping around.

“For the 90% of consumer who aren’t going as far as the merchant’s checkout screen, this option has to be offered earlier on, well before they are ready to make the purchase,” says Hershfield. “That’s where we need to live, in the pages they see when they are researching and browsing.”

In terms of strategy, Accrue represents a two-stage BaaS play. It relies on Unit and Blue Ridge for basic access to the banking system and deposit insurance and offers a selection options for its merchants.

Once a consumer has chosen Accrue, they can set up their plan on the app or online to fit their schedule or the amount of money they can put by in each installment. (Friends and family can also contribute to the savings plan, somewhat like crowdfunding and similar shared financing.) Many plans run about three months. The app details the level of incentive that the merchant will pay for that pending purchase.

It's Not BNPL Nor Is It Layaway:

One key difference from old-style layaway programs is that an Accrue plan represents an intention to buy, rather than a hold on a specific item.

“It’s neither a sale nor a purchase,” says Hershfield.

The consumer is free at any time to change their mind, cancelling the plan and keeping their money. Merchants don’t receive anything until a plan reaches fruition and the consumer pulls the trigger on the purchase. When the plan is completed the purchase goes through the Accrue Savings debit card.

From the seller’s perspective, the name of the game is pushing traffic to their site to make purchases.

“Up until now, the only thing ecommerce sellers could do was to give money to Google, Facebook and other marketing companies to attract consumers and drive them through the sales funnel,” says Hershfield. “However, many discount programs and buy now, pay later offerings are ‘bottom-funnel’ tools. Merchants need to build affinity and loyalty with consumers long before they are ready to make a purchase.”

He says the money that would otherwise be paid to big techs for leads through pay-per-click search engine marketing instead pays for Accrue account savings incentives. (Consumers must go through the purchase to harvest the incentives that have been paid in by the would-be seller, per the account agreement.)

“If they start a savings plan you no longer have to keep spending to bring them back to your website,” explains Hershfield. He likes to say that they can “spend less on ads, more on your customer.”

How Accrue Makes Money with ‘Save Now, Pay Later’

Pay-per-click marketing can run into big numbers, depending on the buy that the brand’s marketer makes. This leaves a pie that not only provides incentives for consumers but also income for Accrue as plan overseer.

Hershfield says that the first source of income is a promotional fee paid to Accrue by the merchant when a sale occurs. The second source is interchange income from the debit card transaction. Finally, for some accounts there is a fee for software as a service, when Accrue code is built into a merchant’s website.