Subscribe Now Get The Financial Brand's FREE Email Newsletter
Apple doesn't want or need to be a bank to squeeze profit from booming buy now, pay later trend. Its new payment moves could simply be to strengthen its hold on the vast iPhone user base.

When the likes of Amazon, Apple and Google do anything in the financial space, it’s a common reaction to think that the big techs are engaging in banking. Yes, they are doing banking things, but the purpose is frequently different than simply competing with legacy players.

The latest case in point is the report, broken first by Bloomberg, that Apple is crafting a multi-year strategy to develop its own suite of payment process technologies. Apple is said to be devising ways to deliver payment-related services so that it reduces its reliance on outside providers.

This may seem like strictly a payments play, but typical head-to-head competition is not likely what Apple intends.

Glimmers of What Apple Has in Mind

Bloomberg indicated that the leaked secret plan, parts of which are called “Breakout,” would include elements of payment processing, risk assessment for lending, fraud analysis, credit checks, a subscription service for Apple hardware, and a buy now, pay later feature running out of its Apple Pay wallet.

Tech news website The Information questioned the overall thrust of the moves. “As big as Apple is in the selling of iPhones, iPads and MacBooks, surely banks and credit card companies are more expert in finance. Apple’s looking like a company that has lost its focus.”

But, then, what is really Apple’s focus? Thinking that Apple is on a financial DIY kick may not be right.

“Part of Apple’s move is to add more service for their existing iPhone user base. The model is straightforward. It’s called ‘monetizable daily active users,’ and Apple has more than a billion of them. So you’ve got to be adding digital services continually.”

Crone adds that Apple has moved into every digital service possible, including movies, music and streaming. “Didn’t they just win an Oscar for Best Picture?” says Crone, referring to the 2022 victory for Apple’s “CODA.” Financial services, he says, have been migrating to digital channels with accelerating speed so this is a double opportunity for aggressive Apple.

Reuters Breakingviews suggests that BNPL firms and payments fintechs like Block “should be on high alert,” as a result of the latest Apple news, but that mainstream lenders can relax, somewhat.

But no industry should be selling Apple short or waiting until it is breathing down their necks.

When Ruby Walia was a payments executive at TD Bank, he was heavily involved in its effort to join Apple Pay. He says that while he and his fellow bankers respected Apple as a company, they weren’t sure what to expect as it moved into payments.

“We were actually quite surprised to see that they had built a team of bankers hired from large financial institutions who knew how payment systems work and what it meant to be compliant with regulations all around the world,” says Walia.

“Apple in very short order walked up to a table at which they didn’t have a seat” — payments — says Walia, now Senior Advisor for Digital Banking at Mobiquity, “and quickly pushed aside some of the people who had been at the table for a long time and made room for themselves.”

What makes Apple an instant factor in every new financial service is its ability to eliminate friction.

“What the consumer gets is financial services provided through a user interface that they know, love and trust — the Apple iOS on their iPhone,” says Richard Crone. “That’s what Apple will be leveraging.”

“For Apple, if they can take out just the slightest bit of friction out of each of those experiences, they’re improving the quality of their customers’ lives and that’s part of their value add,” says Walia. “As they become involved in more and more life experiences, the financial element will represent a more complete picture. There are few experiences in life other than going for a walk that are free.”

That doesn’t mean that Apple’s interest in new areas foreshadows any “Bank of Apple.” Crone notes that virtually nothing that Apple is said to be considering requires a bank charter, especially not a buy now, pay later entry. The company has partnered in India and Canada for BNPL and was said to be working with Goldman Sachs, its Apple Card partner, on BNPL. But the “Breakout” effort could be something separate.

The timing would be fortuitous for an Apple Pay buy now, pay later product. BNPL is under a pall in some quarters and Apple’s strong credentials on customer privacy would support this new activity.

Apple Pay makes a good spearhead for BNPL. “Even though BNPL is growing exponentially in ecommerce, ecommerce still represents only about 20% of total sales,” says Crone. “Apple Pay represents a good user interface to bring buy now, pay later to the physical point of sale. Apple can take on a good portion of the same functions as any of the fintechs in this space — and do it with much more bravado.” 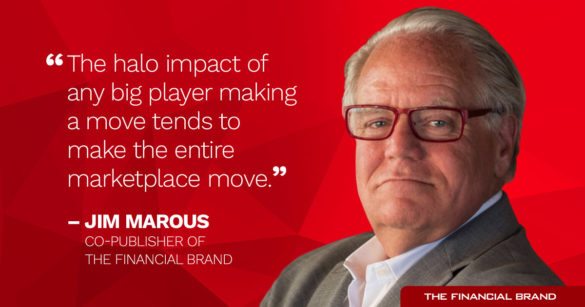 Crone says Apple Pay offers the company a “walled garden” for payments in general and BNPL in particular because Apple only allows access to its wallet to providers willing to share proceeds with them.

That brings up a wrinkle that other BNPL firms don’t bring to the table: the ability to provide a portable payments device that can offer multiple options for BNPL financing. If Apple gave multiple BNPL options — say its own and a couple of others — it would profit off any choice. Some providers would offer different plan features or other variations on the BNPL theme than Apple.

Walia, who consults with institutions developing BNPL programs, suggests that card issuers who offer the ability to turn card payments into BNPL installments could issue pre-approved BNPL/credit line hybrids that shoppers could have in hand.

A wallet that offered multiple BNPL options could accomplish something not yet seen — an approach to centralizing a consumer’s BNPL plans in one place, permitting better credit and payment management.

If Apple Jumps In, Will Google, Walmart and Others Leap Too?

Landslides begin with a few pebbles rolling, and Apple is already a very large boulder. What will follow actual execution on the leaked plan?

Jim Marous, Co-Publisher of The Financial Brand and CEO of the Digital Banking Report, says Apple’s increased interest in finance hasn’t quite come into perfect focus yet — but the implications are.

“One thing I believe is clear is that the activity will very likely get both Google and Amazon, as well as fintech firms like PayPal and retailers like Walmart to ramp up their finance activities,” says Marous.

He adds: “The halo impact of any big player making a move tends to make the entire marketplace move.”

Both Crone and Walia see the Apple plan stimulating, or, more likely, bringing forth the ambitions of Google. Walia says Google could very well have an interest in BNPL.

“But privacy is not one of the planks in their platform,” says Walia. “So they would be incented to do it because they will actually hoover up all the data and monetize it.” The more Apple’s coming moves make such strategies respectable in Washington and acceptable to consumers, he says, the more likely Google will move. There are a good many Android users out there, even if Google Pay hasn’t done as well as Apple Pay.

Banks Don’t Have to Wave White Flag in Battling Apple

With one big gun apparently moving in, and others joining the likes of Klarna and Affirm, do banks just getting rolling in buy now, pay later plans just chuck it in? Walia says BNPL is still new enough, and growing rapidly enough, that banks should keep moving forward.

“Banks still have a lot of tools in their toolbox with which to fight back,” says Walia. For many consumers they still hold the checking account, centerpiece of consumer banking and the source of much financial data that credit bureaus don’t have and thus can’t distribute.

He also says the banking industry shouldn’t sell itself too short on customer experience.

“Yes, Apple definitely gets rid of friction and creates delightful user experiences,” say Walia, “but that doesn’t mean that banks can’t do that. Some of the bigger banks have created quite nice mobile apps, for example, with great user experiences. BNPL is still a nascent marketplace.”