Subscribe Now Get The Financial Brand's FREE Email Newsletter
The latest ads from Ally Bank attack consumer skepticism and debunk common misconceptions consumers may have about a branchless model.

Ally Bank, the nascent online bank that emerged from the ashes of GMAC, has rolled out another set of creative, entertaining ads. The television and online video advertising illustrates interactions with call center representatives to demonstrate that an Ally customer can have a high-touch banking experience without a branch. An underlying theme is how Ally Bank’s direct banking model allows it to pass savings to customers through 24/7 customer service and no hidden fees.

“We know there are consumers that may be hesitant to try a new banking experience,” Diane Morais, head of Ally’s deposit line. “This campaign tackles some of the questions that may exist when considering a direct bank.

In one of the spots, Ally lays out a fairly straightforward case for an online-only bank: “Not having branches lets us give you great rates and service.” It’s a logical argument where consumers infer the savings realized by eliminating a branch network will be passed on to them. That makes sense, but lots of other banks talk about their “great rates and service” too. Are consumers jaded, skeptical of such promises.

Morais is optimistic that Ally can flip holdouts into online banking converts.

“We strive each day to turn skeptics into believers by exceeding our customers’ expectations in every way,” Morais explains. 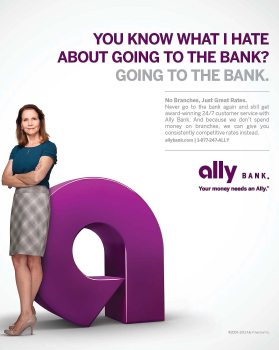 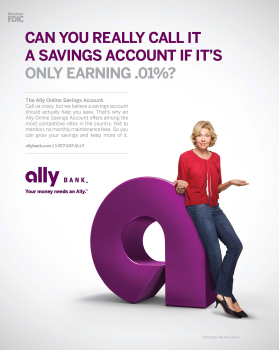 Morais says the new TV ad campaign highlights both the “human faces of our customers and the great people behind Ally Bank.”

Both the spots have already been viewed around 100,000 times each.

This change in ad strategy suggests Ally sees more opportunity among consumers who have never used an online-only bank than with those that have. Perhaps Ally is looking at data that suggests they are nearing maximum penetration among the pool of early/eager adopters of branchless banking, and they see their greatest growth opportunities in consumers that need the basics explained to them — starting from square one. In that respect, the campaign somewhat reflects Ally’s overarching brand theme: simplicity.

The spots convey basic messages — “It’s okay to try new things,” and “We don’t hide things from you” — which speak to the psychological concerns of Ally’s target audience. But core foundational concepts of “simplicity” aren’t really expressed or communicated. How does Ally save people time? How does Ally remove the friction in banking processes? These are powerful selling points that Ally could exploit more often and more directly in its ad messaging.

Jeff Marsico, a consultant with The Kafafian Group, attributes much of Ally’s meteoric growth to their ad strategy. “How do I explain the branding study by a client that identified Ally Bank as the most recognizable brand in their market?” Marsico muses on his blog. “My money is on their ad budget.”

“The key to be the bank consumers go to once ‘something’ happens is to be on top of their mind when they decide to switch,” Marsico says. “Ally does that through their ad budget.”

Unfortunately Ally’s formula for success won’t work for many community banks and credit unions who lack the resources for major ad campaigns. According to Marsico, community-based institutions who want top-of-mind name recognition have to work harder and smarter.