Subscribe Now Get The Financial Brand's FREE Email Newsletter
Most of the world is feeling pretty gloomy about their prospects for retirement. But not the LGBT crowd, according to a survey by Wells Fargo.
Subscribe Now!

In a nationwide Wells Fargo retirement survey, LGBT non-retirees reported a higher level of confidence in their retirement savings when compared to the general population.

In the survey, 61% of LGBT non-retirees felt confident they would have enough saved by the time they retire to live the lifestyle they want throughout their retirement, significantly higher than 53% cited by the general population.

Over a third (36%) of LGBT non-retirees expect they will need to work during retirement in order to afford their desired lifestyle, only slightly lower than the 41% of the general population.

LGBT respondents overwhelmingly reported they would find value in information and advice on investing and preparing for retirement. Additionally, only about a quarter of the LGBT respondents currently had a detailed written plan for their finances in retirement.

The online survey, conducted by Richard Day Research on behalf of Wells Fargo, included 505 adults ages 25-75 who identified themselves as lesbian, gay, bisexual, or transgender. Comparisons were made to a similar national online sample of 1,190 non-LGBT adults. The study was fielded between December 2nd and December 18, 2011.

Consumers everywhere are faced with complex challenges when it comes to retirement. How much is enough to invest? What are the options? When will I be able to retire? LGBT investors (lesbian, gay, bisexual, and transgender) face these same challenges, as well as several others unique to this market segment (e.g., generally higher household incomes, a lesser need for college savings plans, and inheritance issues related to marital status).

The Accredited Domestic Partnership Advisor (ADPA) program was created through a partnership with the College for Financial Planning to educate advisors about the unique needs and financial considerations of LGBT domestic partners. Financial advisors who earn this designation are well-equipped to work with domestic partners and lesbian, gay, bisexual, and transgender (LGBT) clients to develop a thoughtful approach to meeting their financial goals.

Approximately one in ten LGBT respondents in the survey said they have heard of ADPAs. Upon hearing a description of ADPA advisor training and designation, most gay men (60%) and lesbians (72%) say these credentials would be important to them when choosing a financial advisor to work with.

Wells Fargo was the first in the industry to create this program and today has more than 100 ADPA-certified financial advisors nationwide.

“It’s especially important for LGBT investors to find financial advisors who are acutely aware of the challenges, laws, and regulations that impact their investment planning needs,” Young added. “This additional knowledge affords clients encouragement in knowing that their needs will be heard, understood, and thoughtfully explored.” 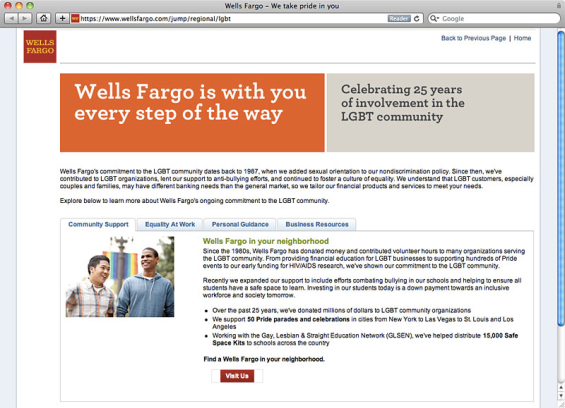 Wells Fargo has a special section of its website setup for the LGBT community, where the bank discusses its support for LGBT individuals, employees and business owners.

Since the 1980s, Wells Fargo has donated money and contributed volunteer hours to many organizations serving the LGBT community — from providing financial education for LGBT businesses to supporting hundreds of Pride events to our early funding for HIV/AIDS research.

Over the past 25 years, Wells Fargo has donated millions of dollars to LGBT community organizations. They support 50 different Pride parades and celebrations in cities from New York and Las Vegas to St. Louis and Los Angeles. The bank is also a founding corporate partner of the National Gay & Lesbian Chamber of Commerce.

Recently, Wells Fargo expanded its efforts to include programs that combat bullying in schools. Working with the Gay, Lesbian & Straight Education Network, Wells Fargo has helped distribute 15,000 Safe Space Kits to schools across the country.