Subscribe Now Get The Financial Brand's FREE Email Newsletter
Government interventions during the pandemic kept financially vulnerable Americans afloat. As government relief ends, banks and credit unions have an opportunity to continue to improve the financial health of their customers, particularly the demographic segments most at risk.

First, the good news: Thanks to stimulus payments, expanded unemployment benefits, mortgage and student loan forbearance, and an eviction and foreclosure moratoria, overall U.S consumer financial health improved from 2020 to 2021, according to a report from the Financial Health Network.

Black, Latinx, and Asian American individuals and those with household incomes under $30,000 saw the most progress. (For reference: a four-person household with an income of $26,500 is under the poverty guidelines set by the Department of Health and Human Services.) 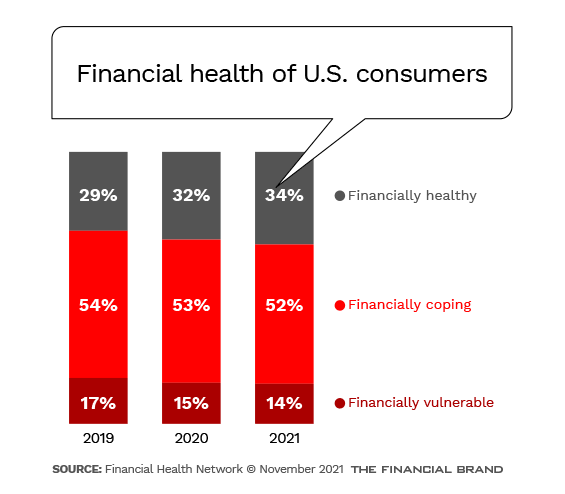 To put the above chart into real numbers:

Not only did the government step in to help boost people’s finances, but many people also reduced personal spending during the pandemic. More than one-third (34%) used their stimulus checks to pay off credit card debt and improve their credit score. And it worked: Experian reports that credit scores reached an all-time high in early 2021, with an average FICO score of 695.

And the Problem Is?

The bad news is that despite the improvements just cited, only one third of the U.S. population is financially healthy. Financial Health Network uses eight indicators including the ability to pay bills, credit score, manageable debt, and having savings to cover at least three months of living expenses to calculate financial health.

Will the financial gains be sustained once the effects of temporary relief payments have worn off?

What’s unclear is whether or not the end of temporary relief and stimulus payments will impact how many people remain financially healthy. Will people spend down their savings once the pandemic is over? Will their spending habits return to pre-pandemic levels?

Sure, the Advanced Child Tax Credits will help some households — but 73% of people who received unemployment insurance don’t have children under 18 years old and won’t qualify.

Overall, women earn 84% of what men earn, a gap unchanged for 15 years.

Those households with six figure incomes are nearly five times as likely to be financially healthy than those with household incomes under $30,000.

Women, regardless of ethnicity and income, did not fare as well as men during the pandemic. Since women are more likely to take the role of caregivers, 61% of women said that their work was interrupted by childcare or adult care responsibilities. This makes the argument for paid family and medical leave and universal childcare more compelling.

This disparity highlights the continued gender pay gap, which has not improved in the past 15 years. According to Pew Research, women continue to earn 84% of what men earn. It takes an extra 42 days of work for women to earn what men earn in a year.

Other groups that tend to be more financially vulnerable include the disabled, those with less than a bachelor’s degree, those living in the South, and LGBTQ+ individuals.

For instance, 35% of non-LGBTQ+ individuals are financially healthy versus 24% of LBGTQ+ people.

Figuring Out Banks’ Role to Play in Financial Health

When J.D. Power asked consumers if they felt that banks and credit unions had an obligation (an admittedly strong word) to help customers improve their financial wellness, consumers, surprisingly, were split. One-third said that banks don’t have an responsibility, one third were indifferent, and one-third say yes.

Those consumers who say “Hey banks, help us figure this out” have a few attributes in common, explained Paul McAdam, senior director, Banking and Payments for J.D. Power during a presentation at Financial Health Network’s EMERGE conference. They tend to be younger, non-white males, live in urban areas, and have higher incomes. These shared attributes paint a picture of a more sophisticated customer who may already have had positive experiences using personal financial tools.

McAdam, for one, believes banks and credit unions should absolutely take the initiative and partner with customers to improve financial outcomes. The approach will look different based on the customer’s financial tier. Those who are financially healthy many need help with retirement planning and investments while financially coping and financially vulnerable customers need more basic assistance such as how to create a budget, avoid fees, better manage their cash flow, and increase their credit score.

Helping customers with the child tax credit is an opportunity akin to helping small businesses with the Payroll Protection Program (PPP)McAdam points out. It’s a chance for banks and credit unions to create good will, demonstrate that they care about their customers, and increase customer loyalty.

Thirty-six million households will receive the child tax credit as part of the American Rescue Act, says McAdam. “We estimate that this will cumulatively add $115 billion into customer accounts. The IRS website is tough to decipher, so customers need help as some will face tax implications.”

Banks and credit unions tend to think of transaction-based activities as the place they can add the most value to customers, but a J.D. Power study finds that it’s not true.

The company analyzed digital banking tools, and of four digital tools that had high customer satisfaction scores, three were focused on financial literacy and education.

Customers want tools to learn about using credit wisely and what factors they should consider when deciding whether to rent or buy a home. They want to know how they should plan and budget for a large purchase like a new car. They especially want to learn how to avoid bank fees.