Subscribe Now Get The Financial Brand's FREE Email Newsletter
For most Americans, saving money gets the short straw when it comes to managing the budget. Why don't more consumers sock money away when they know it's the right thing to do?
Subscribe Now!

When compared with family life, professional life, social life and personal health, financial health ranks as the aspect of life that Americans are least satisfied with. Much of this has to do with the toxic imbalance between spending, borrowing and saving.

A survey of 2,000 Americans conducted by Capital One found that more than a third (36%) feel their income is not high enough to allow for much savings, and one in ten say their income is not stable enough to save money. Almost a quarter say they struggle to keep up with regular financial obligations — e.g., mortgage, car payment, etc.

Many unwittingly sabotage their savings efforts with their spending. More than one in ten say they are living over their budget, and just as many admit to spending too freely. More than a quarter (28%) always or very often blow whatever money they’ve been able to save.

You might think people save money for proactive reasons — to get ahead, save for retirement or create a rainy day fund. Not the case. The number one reason consumers cite for stuffing money into savings is to get out of debt. Unfortunately they don’t seem to understand that there is no advantage socking away funds to pay down an existing debt; interest accrues over time, so the longer they wait, the more they’ll have to pay. The smart decision, of course, is to pay down debts immediately as cash becomes available. 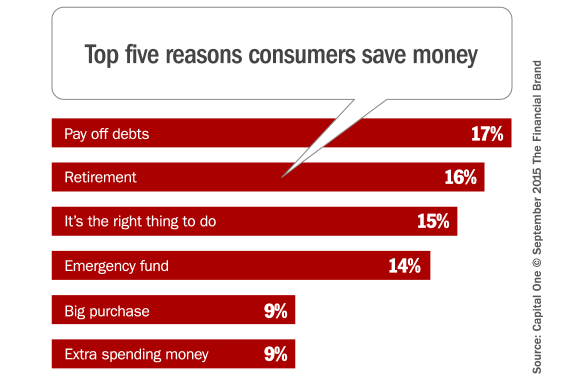 More than half (54%) say they would be willing to give up coffee for the rest of the year to get a higher savings balance. More baloney.

If people really wanted to save more money, they’d pack their lunch to work instead of going out. 66% of the Americans choose to buy their midday meal rather than pack one, costing them an average of around $37 per week — nearly $2,000 every year.

Reality Check: Consumers are unrealistic about what they say they are willing do for an increase in savings. They’ve had opportunities to make the necessary sacrifices for decades, but they refuse to do it. They just keep spending and borrowing more while saving less.

The average American forks over between $100 and $150 per month to their mobile provider. And the typical American is shelling out more than $20 a week on coffee, for a yearly average of nearly $1,100. That’s $2,600 per year that people could be putting in savings if they axed both the phone and coffee. But no one is surrendering their coffee or smartphone. No matter how broke people may be nor how desperately they may want to save, mobile phones are now considered by many consumers to be more important than their toothbrush or sex.

“Saving is a critical step to achieving financial success, something I try to help people attain every day, in fun and easy ways,” says acclaimed financial expert and journalist Nicole Lapin. “Financial well-being is never the same for any one person, but the way to get there follows a similar path: determine a set amount of money that you will save each month for a specific goal and stick to it. Setting up auto-deposits through an online savings account is a great way to get started.”

One in ten consumers do not expect to save anything or the rest of the year, and almost a quarter (24%) say they will save less than $1,000.

The Emotional Upside of Savings

There are emotional benefits to savings that consumers often overlook. The survey found that peace of mind and preparedness are hallmarks of those who make a habit of saving.

More than half of the respondents in the study said they are happy when they actually save money. One in four consumers say saving money affords them/their families a higher quality of life. 53% say saving money brings them peace of mind, and an equal number say it relieves stress between them and their significant other.

Only one in ten respondents said saving money felt like a sacrifice. Almost no one (4%) said saving left them feeling deprived.