Subscribe Now Get The Financial Brand's FREE Email Newsletter
Few financial institutions have been brave enough to explore the potential of Pinterest, and most have struggled to find any traction. But BofA says it's found a formula that works — a peculiar three-way content marketing partnership that puts a bank in bed with Pinterest and a popular TV production company.

Bank of America is sponsoring a personal finance show called “The Business of Life” that is produced by Vice Media, a team of raw documentary storytellers who are best known for their groundbreaking newsmagazine hosted on HBO. BofA’s show is being jointly promoted through digital scrapbooking site Pinterest, which links the branded content with those financial topics Millennial Pinterest users are interested in most.

Christopher Smith, a social media marketing executive with BofA, says the bank isn’t obsessing over how to leverage Pinterest directly — for message distribution — but rather to guide message creation. According to Smith, Pinterest counts more than 1.3 billion pins about managing money. “We are utilizing Pinterest as a visual search engine to reach consumers with the right message at the right time, and tailoring our content to what consumers are searching for most often,” he explains.

Meredith Verdone, a top marketing boss at BofA, concedes this type of three-way media partnership is unusual. “It’s a little bit of strange bedfellows, and that’s intriguing,” Verdone says. “To say, ‘How can we tap into the relationship — the storytelling that Vice does with their audience — and then to tell the story about better financial lives on Pinterest?'”

The BofA-branded financial education program, “The Business of Life,” follows a talk show format. Hosted by journalist Michael C. Moynihan, each episode brings together an eclectic panel of writers, thinkers, policy experts and scholars to analyze “everything Millennials need to make financial sense of the most complicated topics of our time.” With bi-weekly episodes, BofA aims to give Millennials a fresh perspective, using data — facts, figures, dollars and cents — to explore subjects that shape our world.

Bank of America — Introducing ‘The Business of Life’ (Trailer)

Moynihan, the show’s host (no relation to Brian Moynihan, BofA’s CEO and Chairman), bemoans the coverage traditional media channels have given to financial matters. “While the media landscape has dramatically transformed during my years as a journalist, one thing has remained depressingly constant: economic news and coverage of money issues has always skewed towards the wealthy and old,” Moynihan says. “With ‘The Business of Life,’ our goal is to seize upon the failure of traditional media and produce a show that features topics young people care about — addressed by a panel of experts who don’t speak wonk.”

“We’ve been successful on Pinterest because we’ve listened to what the community wants to know — what people are searching for — and customized our content to meet those needs.”
— Christopher Smith, SVP/Marketing at BofA

Shane Smith, CEO of Vice Media, sees an array of angles and advantages in his company’s three-way partnership with BofA and Pinterest.

“Young people are growing up and need financial advice,” Smith tells Beet.TV in a video interview. “But banks don’t have the best reputation.” When BofA asked him what he’d do and how he’d tackle the problem, Smith told them, “It’s very simple. Just give them factual information: ‘Here’s what a mortgage is,’ ‘Here’s how you lease a car,’ ‘Here’s renting vs. buying.’”

“Pinterest is one of the biggest platforms in the world,” Smith adds. “We didn’t really have a partnership with Pinterest, so we wanted to see how that would work, and it’s worked fantastically. Analytics doesn’t mean anything unless you can convert it in to something. Pinterest’s data actually works.”

At the time this article was published, “The Business of Life” had yielded at least eight episodes: one on big data in the US workforce, another on the modern American family, and a third on the value of creativity. Other subjects include Millennial veterans, immigration, and the cost of getting a college education. (You can check out the list of episodes here on YouTube.) Some examples of the data-based perspective the program uses to explore these subjects include:

The shows are produced with the level of polish and professionalism that you would expect from BofA, but also remains true to the intense, edgy brand that Vice has carved out for itself.

“The Business of Life” program is an extension of BofA’s “Better Money Habits” financial education initiative, which is itself based on a partnership with the Khan Academy. Khan is a non-profit educational organization created in 2006 by educator Salman Khan to provide “a free, world-class education for anyone, anywhere.” The organization is widely respected for producing micro-lectures available — for free — on YouTube.

BofA attributes Pinterest with driving 30% of the social media traffic that its “Better Money Habits” website generates. The bank also claims 72,000 re-pins on Pinterest, making it one of the top-performing financial services companies on Pinterest. 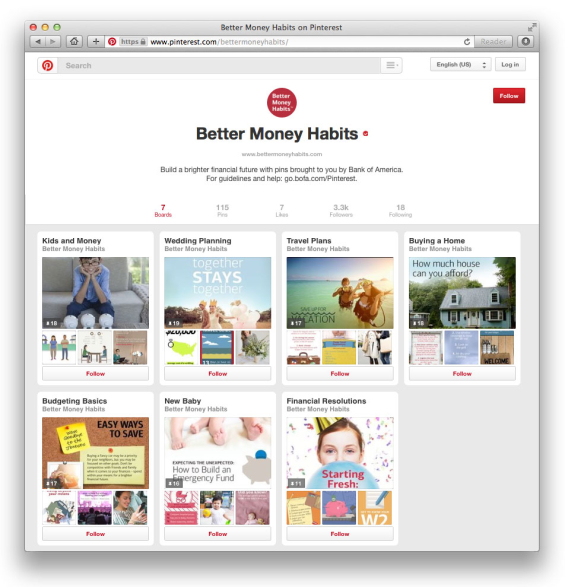 While the number of followers brands on Pinterest have generated might strike outside observers as insignificant, Verdone at BofA isn’t phased. She spins the bank’s financial education efforts from both a personal perspective as well as through the lens of business strategy.

“In marketing, we have access to vast amounts of data, but we can’t get lost in those numbers,” explains Verdone. “We still need to apply instinct — that gut feeling when we intuitively know what is right.”

“Our success with Better Money Habits and the Khan Academy — with almost 8 million visitors and more than 51 million content views in two years — led us to expand the partnership to Pinterest, where people can get tips on the financial side of personal milestones. Then we partnered with VICE News on ‘The Business of Life,’ a web-based, mobile-friendly show.”

“Not long ago, these partnerships would have made some of us uncomfortable,” Verdone observes. “But taking risks such as these and not being afraid to fail is how you can learn and ultimately make things better — for your company and yourself.”