A study by the Federal Reserve found that 47% of consumers could not cover an emergency expense costing $400, or would have to cover it by either selling something or borrowing money.

According to a survey fielded by BMO Harris, 29% of Americans say that whatever they’ve got scraped together in their rainy day fund would last them no more than one month. One in five confess they would need to dip into their retirement savings in a financial emergency (and that’s probably most of those who have any money saved for retirement).

One in five say they are guilty of spending more than they made last year.
— Federal Reserve

Medical expenses scare people the most. Three out of five Americans are uncertain whether their savings could weather any type of medical emergency in their family. In fact, 31% report going without some form of medical care in the past 12 months because they could not afford it.

More than half of America is sweating about potential car repairs, unsure if they’ve got enough money to cover anything unexpected. An equal number of consumers worry that home repairs might inflict financial pain.

Three quarters of Americans admit they have dipped into their savings, with unexpected repairs cited as the most common reasons (car 31%, home 28%). 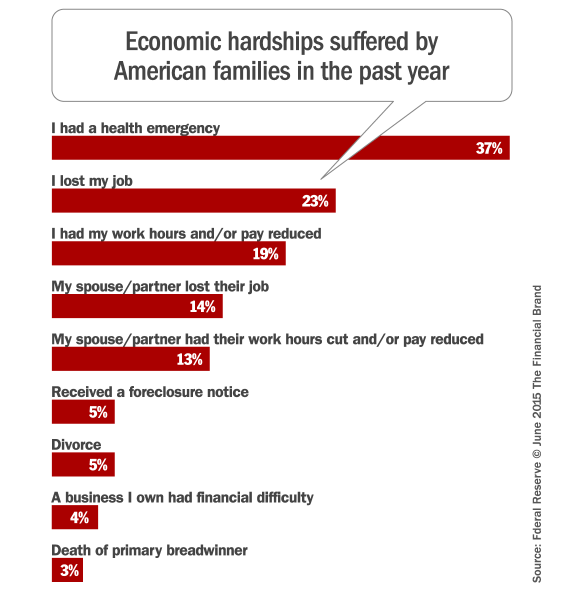 Who’s Saving, How Much and Where?

America’s best savers are the middle class. More than one-third (35%) of households with annual income between $50,000 and $74,999 are saving more than 10% of their incomes, a rate that outpaces even the highest-income households. 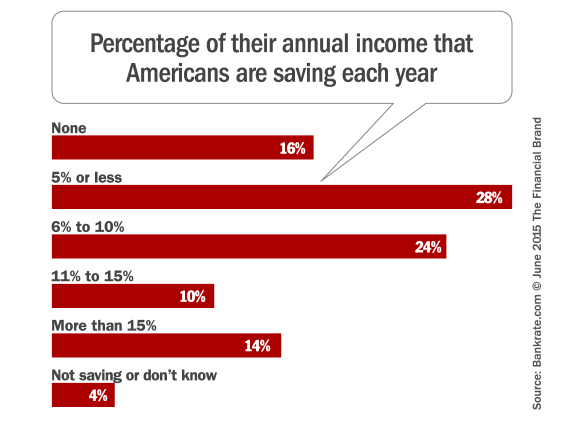 Those in the western U.S. are out-saving their counterparts elsewhere around the country; 31% of westerners are saving more than 10% of their incomes, compared with just 20% of southerners. The picture isn’t entirely rosy out west, however, because 19% of westerners aren’t saving anything. That’s worse than all other regions.

Hispanics were more than twice as likely as whites to say they don’t save any of their income.

People living in urban areas were more than twice as likely as suburbanites to invest more than 15% of their income.

One-third of Americans between 18 and 29 years old were more comfortable, compared with only 18% of those between 50 and 64.

People with jobs were more than twice as likely to say they were more comfortable as those who were unemployed (ya think?).

Half of America says they feel the same about their savings as they did last year — some good, some bad and some indifferent.

Reality Check: It’s hard for anyone to get really excited about saving money when interest rates are at rock bottom.