How Steve Jobs approached innovation has become the stuff of legend, with movies and books and numerous management articles exploring his approach to design, marketing, leadership and technology — as well as his mercurial temper, brashness and manic intensity.

According to Guy Kawasaki, the former chief evangelist of Apple and opening keynote speaker at The Financial Brand Forum, says the kind of thinking and management behavior that created one of the world’s most celebrated brands in Silicon Valley is precisely what the banking industry needs.

Guy Kawasaki knew Steve Jobs well. Kawasaki worked for Jobs at Apple from 1983 to 1987 and again from 1995 to 1997. Kawasaki shared the lessons he learned from Jobs to a packed auditorium at The Financial Brand Forum.

Embracing such new, radical ways of thinking was the battle cry during the first day of the conference. A record-breaking audience with 1,750 banking professionals heard Jim Marous, Co-Publisher of The Financial Brand tell them the urgency to make drastic changes wasn’t just a “scare tactic.”

“This isn’t a Chicken Little situation,” Marous warned the crowd. “The sky really is falling. We’re in the final countdown for traditional banking.” 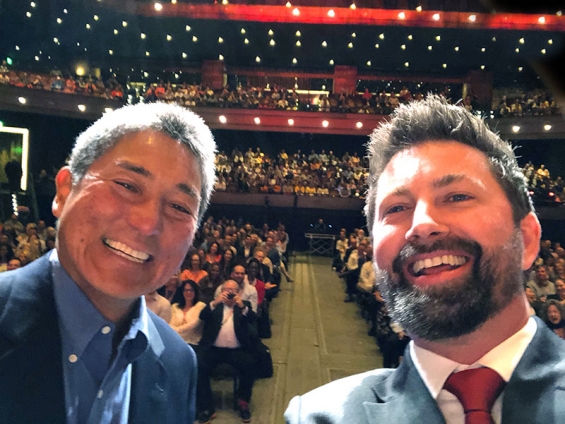 Guy Kawasaki and Jeffry Pilcher, CEO/President and Founder of The Financial Brand, are seen here taking a selfie on the Forum 2018 stage in front of a packed house.

Kawasaki told the crowd that Jobs was famously crazed about design, with a love of simplicity driven by a deep empathy for the consumer.

Granted, banks and credit unions may not manufacture products, but the principles of great design are still important.

“It matters what your mobile banking app looks like,” said Kawasaki, making an emotional plea for financial institutions in the room to design a mobile app that is elegant, intuitive and simple — not just functional. “It shouldn’t require five steps to perform a single transaction.”

Great design is more than just cosmetic aesthetics, Kawasaki said. It’s about creating a great experience. For instance, Kawasaki urged bankers to save photos of checks deposited using a mobile device in the a photo gallery. Consumers should be able to quickly reference checks they’ve deposited and confirm when they’ve cleared. The monthly statement might say “$425.00” was deposited, but how can they confirm it wasn’t actually supposed to be “$524.00” unless they can look at the original document? Regardless of the reason, Kawasaki said a photo library should be part of a mobile banking app.

Design even matters in something like email. In another session, Lynne Jarman-Johnson, Chief Marketing Officer at Consumers Credit Union, told attendees that a well-designed welcome email to new members resulted in a 49% open rate and significantly decreased questions to the branches and call center. The credit union was able to reduce their call center headcount by two FTEs, which meant the marketing department could hire two additional employees, much to the delight of Jarman-Johnson.

Lesson 2: Be Careful How You Define Yourself

The message Kawasaki learned from Jobs is that if you get the definition of what you do wrong, you’re dead. So does your bank or credit union provide checking accounts and loans? Or are you in the business of providing consumers with financial piece of mind? If it’s the former, you can more easily be usurped by the Amazons and Apples and Googles of the world. If it’s the later, Kawasaki says you’ve got a good shot.

First Source Credit Union, like many financial institutions, didn’t have products that aligned with how they wanted people to view their institution. They had the standard mix of auto, mortgage, home equity and personal loans, Katie Ullman, Marketing Manager, told Forum attendees, but these products — as designed and marketed — weren’t meeting all their member’s needs.

First Source launched a product set of lifestyle loans designed to help members deal with specific financial challenges. The credit union started with a holiday loan product offered for six weeks starting in November. The loan was a huge success, with $900,000 in loans originated in 2017. The credit union then released a home energy loan, a home improvement loan, a health improvement loan, a healthy pet loan, and a family support loan to assist members with the financial challenges of a death of a family member.

By redefining what they offer to members and how they market them, these lifestyle loans helped them originate an additional $42 million in loan volume.

“The first Mac computer was a piece of [junk],” recalled Kawasaki, with 128 megabytes of RAM and puny floppy drive. But the next version was better. And the next was better still.

Kawasaki wasn’t encouraging bankers to release lousy mobile apps or lame new products. He was telling Forum attendees that their ideas don’t have to be perfect before they are released.

“If you don’t cringe when you look back at the first release of a new product or tool,” said Kawasaki, “then you were not innovative enough.”

Later in the day at another session, TCF Bank explained how they wanted to design a new digital platform, but they didn’t want the process to drag on and on. They knew they needed to launch something quickly, or they could get stuck pursuing an impossible level of perfection. Things change so quickly in the Digital Age — particularly consumers’ expectations — that the project’s initial design parameters might be outdated before they could even settle on a release date. So they set the goal to get a new digital platform out the door in only 10 months. As Mark Troske, Senior Vice President and Director of Digital, explained, the bank changed vendor partners, overhauled their internal processes, realigned their teams accordingly, and took a fresh approach to product management.

Rather than waiting for the perfect release, TCF Bank adopted a “minimally viable product” (MVP) mindset — something out the banks’ comfort zone, said Troske.

“We embraced chaos and focused on frequent releases,” Troske explained.

They released their digital platform to 1.2 million customers within their ten month window, which ultimately resulted in a 250% increase in wallet share.