Subscribe Now Get The Financial Brand's FREE Email Newsletter
The long-term prospects for midsize banks have been questioned by many. That just makes the leadership of Synovus Bank more determined to prove the pundits wrong. The bank's consumer banking chief describes how a disruption-from-within strategy is helping to pull the $57 billion bank further into the digital age.

That’s rather startling because as EVP and Head of Consumer Banking and Brand Experience at Synovus Bank, she is a key player in helping to usher the 135-year-old bank further into the digital age.

Her aversion to the phrase stems from her belief that it too often translates into simply digitizing a legacy task — like changing a paper document into a pdf. Actually, she says, banks “don’t need to digitize everything.”

One is customer centricity. “It’s about what the customer is trying to do and what they need. It’s not necessarily about the task or the technology,” the executive states.

The second is to have a business-model view of going digital. Digital must really be completely integrated into your business model, she says. “Let your digital journey revolve around that.”

Instead of focusing on “transformation” — which, she maintains, can be “a hot mess,” Wolverton prefers change to be more of a “metamorphosis.”

Using very different words from the usual business-change rhetoric, the executive says, “I want our teams and our company, which have served our clients so well, to gracefully metamorphosize into something different” to reflect what’s happening in the market. She further describes this as “a choreography between digital and human that benefits the consumer.”

These and other comments about transformation came out (ironically enough) during Wolverton’s appearance on the Banking Transformed podcast hosted by Jim Marous, Co-Publisher of The Financial Brand and CEO of the Digital Banking Report. The podcast episode, entitled “Synovus Bank: The Journey to Become a Digital Bank,” covers many of the challenges traditional financial institutions face.

Wolverton, a 20-year veteran at Synovus, had an unusual start for the head of consumer banking. She joined the bank as a young CPA with no banking experience and was immediately tasked with helping to formulate the Columbus, Ga.-based bank’s response to the 2002 Sarbanes-Oxley Act. That experience helped her understand the nature of the industry, which she describes as being, in general, very risk averse with a “very homogenous business model.” 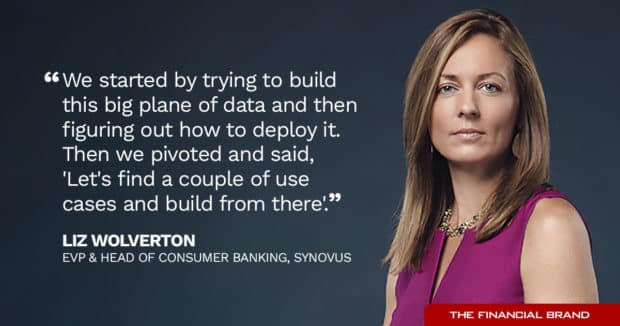 The biggest challenge she and her colleagues have faced in shaking up the way things are done in the bank is its very success doing things traditionally and “an aversion to pace.” However, she says that while some of that perspective remains at Synovus, she has seen much change as the bank navigates a new environment.

A prime example is management’s decision to shift away from dependence on a large technology vendor to better control its digital destiny.

Why Tech Sourcing Decision Was Crucial

In Wolverton’s opinion, Synovus has a very good digital experience but is just “scratching the surface of the opportunity to really differentiate.” A decision the bank made several years ago will make much more possible.

The regional bank made the gutsy decision to walk away from the traditional technology infrastructure it had long used. The bank shifted from relying on a large tech vendor and started using vendors “that aren’t really perfect yet” in terms of the usual banking requirements, as Wolverton put it.

Willingness to try technology that hasn't been vetted eight different ways over 18 months is freeing banks to adapt more quickly.

In other words, Synovus was willing to say, “Let’s do this without all the answers,” a mentality, she says with some understatement, that is not always welcomed within banking. Doing so, however, enables the institution to take charge of how it shapes the customers’ digital experience.

“It’s really about long-term sustainability,” she adds. Ultimately, she believes, the willingness to take manageable risks like this is what differentiates Synovus from other financial institutions.

Why Data Analytics Is So Difficult for Banks to Master

One of the thorniest issues banks of any size must grapple with is effective use of data. Yet, so much depends on that for banks to match the capabilities of the big tech firms that millions of people now routinely use.

It’s difficult for banks to assemble the data they need and get it into usable form. Synovus is no exception. “We started like most people, trying to build this big plane of data and then figuring out how to deploy it,” Wolverton explains. “Then we pivoted and said, ‘You know what? Let’s just find a couple of use cases and build from there’.” Still, she admits Synovus is early in this evolution.

One use case she mentions is on the commercial side, identifying customer attrition risks by tracking deposits leaving the bank and using analytics to identify behaviors and provide alerts to commercial banking officers, saying something like, ‘You might want to speed up your next conversation with that client’.”

As straightforward as that sounds, Wolverton says that it’s been very hard to operationalize that bankwide. “If you flood their inbox with things that aren’t super relevant for them, then the tool becomes less credible.”

Another data-related challenge is “marrying” input from third parties the bank uses with her own analytics team. They have to deploy the insights the outside firms come up with and decide if it works. So it’s not just getting the data that makes this hard, she states, it is the need to develop a data ecosystem.

The week after Wolverton was named Head of Consumer Banking in December 2021, Synovus announced it would be closing 15% of its branches. (In fall 2022 the bank operated 354 across five southeastern states). That prompted podcast host Marous to ask how she gets her branch team to agree to become digital ambassadors if they’re being replaced?

Wolverton’s answer is two-fold. First she described how every person in a closed branch has an opportunity elsewhere in the organization — often several opportunities. “With a remote work environment I can distribute this workforce in a way that is uber valuable,” she says. “When could you ever tell a teller before this that they have an opportunity in about six different areas if they want to pursue it?”

Secondly, she said, they try to show branch staff how by assisting customers to use digital banking they are helping people proactively take care of their financial health. “If we were seen as pushing customers to use digital, branch employees would likely reject it,” says Wolverton, “but when we explain how it’s beneficial to customers, they embrace it. You have to shift the mindset; it always starts with a mindset.”

Marous observed that trust within an institution is rarely discussed. Yet trust by employees that a bank has their best interests — and the customers’ — at heart makes a huge difference.

“If you don’t get your people to buy in,” he says, “the technology’s going to mean nothing.”

Learn More: Catch more of Liz Wolverton’s insights at The Financial Brand Forum 2022 where she is participating in a banker panel “Strategies to Accelerate Innovation in Banking,” moderated by Jim Marous.