Subscribe Now Get The Financial Brand's FREE Email Newsletter
The big regional bank concluded that a modern technology platform is the only way to progress to the next level of data-driven advice and fintech-like agility. That's why it turned a tech-focused core migration plan into a full-scale digital transformation.

To become a true digitally enabled financial institution, free from the heavy restraints of legacy technology and an innovation-stifling organizational structure, is a difficult and expensive task — especially for larger banks that have grown through many acquisitions.

Not surprisingly, frequently banks kick the digital transformation can down the road, especially if earnings continue to be strong. Why risk a setback? Incremental change seems a better bet.

But in a rapidly changing banking world, gradual change also carries risk. An institution that falls too far behind may quickly become uncompetitive.

Given all that, it’s noteworthy that the 25th largest bank in the U.S. — Birmingham, Ala.-based Regions Bank — after weighing the pros and cons has embarked on a major digital transformation. Management estimates the technology part of it will take about five years. Organizational changes will come along the way and possibly run longer. 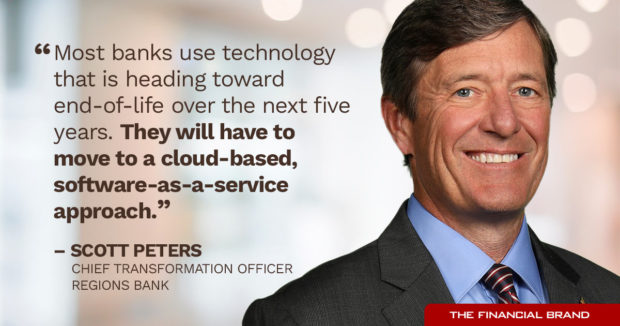 Regions Financial, the holding company, has total assets of $163.2 billion as of Q1 2022. A traditional full-service banking company, it operates in 16 states and has about 1,300 branches.

What prompted this traditional regional bank to commit to a multi-year wrestling match?

First, they could see the impact that digital technology has had on consumer and business behavior and expectations — for example, the outflow of deposits to Cash App, Chime and other digital banking providers. On top of that, Regions Bank’s core computer technology is coming to the end of its life. It will no longer be supported, and it cannot be upgraded further.

Sunsetting technology alone didn’t require a full digital transformation, yet that’s what the bank decided to do.

Like nearly all of it peers, and a good many smaller banks, Regions badly needs a modern core computer system.

“The whole industry is using technologies and architectures that are basically heading to end-of-life over the next five years or so,” says Scott Peters, Chief Transformation Officer for Regions. “So the industry is going to have to move onto an updated cloud-based, software-as-a-service approach versus the old mainframe systems we’ve been running on.”

Regions Bank’s current core system won’t simply stop running. As the bank’s CFO David Jackson Turner told analysts, “We own the operating system. We could run it forever.” That is, with enough legacy-system tech people. But for the most part such people “don’t exist anymore,” the CFO said.

Most bank core migration efforts are tech-led initiatives. Not at Regions. The CEO dictated that it be part of a customer-focused digital transformation.

Regions began planning for the core migration in mid 2021. Initially the move was largely going to be a tech-led initiative — what Peters describes as a “lift and shift” — replicating current systems on new technology and architecture as efficiently as possible.

Then things got really interesting.

“John Turner, our CEO, challenged us, saying, ‘This is an opportunity to transform our entire bank,” says Peters. That is, use the core migration to “create a ‘North Star’ for the way we wanted to be able to serve our customers — to be a better bank at the end of all this effort and energy.” That changed the plan from a technology-led transformation to a business-led approach with customer experience as its focus.

Turner put Peters, formerly head of consumer banking, squarely in the hot seat for this crucial effort, naming him Chief Transformation Officer in May 2022. Peters is working with two other newly promoted executives to direct the multi-year initiative: Kate Danella, Head of the Consumer Banking Group, and Dan Massey, Chief Enterprise Operations and Technology Officer.

(At the time of this writing the bank was in the final stages of vendor selection for a new cloud-based core deposit system, along with new commercial loan and general ledger systems.)

Beyond legacy technology, traditional banking providers have been plagued by the inefficiencies of “siloed” organizational structures, and outgrowth of banks’ long focus on products. Is that part of Regions’ transformation? Peters says it’s definitely something they’re focused on. First they’re concentrating on creating an environment “where we’re focused on the customer and the outcomes for customers,” versus products. “And then we’ll worry about any modifications that might have to be made to organizational design and how we do our work.”

Regions Chooses the Cloud for Its Core

Impetus for the expanded transformation came from a variety of factors, but being able to roll out new products — or integrate third-party products — more quickly was one of the main drivers.

In addition, by moving a majority of its technology to the cloud, Regions will eliminate the resource-intensive mainframe upgrades typical among larger banks. With cloud-based service, upgrades are ongoing.

In an interview with The Financial Brand, Peters was asked if the move to the cloud will make Regions Bank as quick to market and as agile as fintechs.

“Absolutely,” he responded. “The combination of new technology and operating in the cloud will make it quicker for us to make changes.” In addition, it will allow the bank to easily plug in outside applications using APIs (application programming interfaces), making it easier to work with outsider providers for various niche services, Peters observes.

With its new platform, even when Regions Bank supports a fintech app, it will be a seamless experience within the bank's overall customer relationship.

“One of our big goals is to make it seamless for customers to use different types of payment options,” says Peters. People like segregating money for certain purposes, he notes. For example, they’ll park some money in Cash App, Square’s digital wallet. Regions isn’t trying to stop that. Rather it wants to make the experience seamless for the consumer.

“In some cases, we may use outside fintech capabilities,” says Peters, “but [with our new technology] we will have those capabilities embedded within a customer’s Regions relationship versus hanging outside this relationship.”

Other benefits of going to a cloud-based core system include more straight-through processing, leading to greater efficiency; a better customer experience; and more intuitive interfaces.

Regions Bank is not currently exploring embedded banking arrangements, Peters notes, but once they get the transformation done, the bank will evaluate embedding specific applications within a nonbank company’s products or software.

Read More: Why KeyBank Believes ‘Embedded Banking’ Is the Future of the Industry

Taking AI from ‘Next Best Action’ to Nudges

Legacy technology, for all that it can be cumbersome, has not prevented Regions Bank from actively using data analytics for improving customer service and increasing sales. Working with IBM, the bank’s data and marketing teams built an internal system called Rosie.

Rosie prompts branch and contact center staff with “next best actions” based on different data elements including customer activities. “Rosie creates leads for our staff — what they might suggest to a customer or how to open a conversation,” says Peters.

The migration to a cloud-based core will allow Regions, in Peters’ words, to take its existing analytics capability to “a whole other level of sophistication” using artificial intelligence. He says increased use of AI will “trigger a lot more of what you might call nudges or recommendations to stimulate customers’ thinking.” It will also help staff to provide relevant advice and guidance about what a customer’s options might be, based on their particular needs.

Peters gives an example related to live chat: “When people are online with us, we can observe patterns based on their profile and their history. We might pop up an opportunity for them to chat with somebody when it appears that we can be of assistance based on behavior they might be exhibiting in the digital space.”

What Won’t Change at Regions Bank

Regions Bank remains dedicated to providing banking service in branches as well as digitally. “Agility is incredibly important,” says Peters, “but we are still very much a bank committed to omnichannel capabilities. Our customers want to be able to interact with us digitally, through our contact centers and through our local branches.”

While the majority of transactions overall have shifted to digital at Regions, as the trio of charts below shows, more than three quarters of checking accounts are still opened in the bank’s branch network. And deposit transactions are still heavily branch based, although mobile deposits are growing. 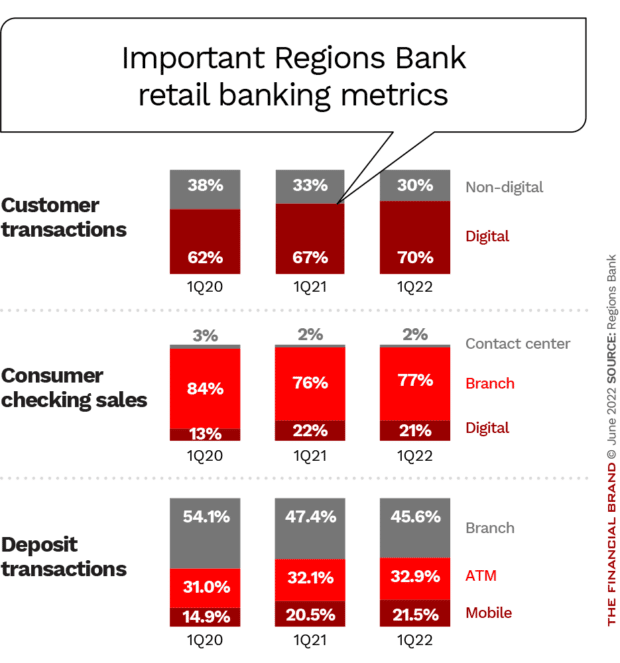 Though committed to the digital transformation of the bank, Regions’ executives don’t want to damage the bank’s reputation for customer experience, service and loyalty, where it has regularly scored well in industry rankings, including J.D. Power.

Modernizing its technology, however, will enable it to get all the channels to work in sync, says Peters, and shift even more of the routine, straightforward transactions from branches and contact centers to digital channels.

“We continue to believe that the advice and the guidance we provide customers is extremely important to them,” Peters states. “To the extent we can direct our resources at delivering even more advice, guidance and education to help customers succeed financially is really key to what we’re trying to get done.”

The bank’s digital transformation is as much for Regions’ associates as it is for its customers, the executive points out. Simpler, more intuitive interfaces and capabilities, Peters states, along with improved data and analytics, will enable employees to “focus most of their time and energy helping customers succeed financially.”