Any time an industry is disrupted, a few of its constituents will pivot to seize new opportunities while the rest hang back, watching and waiting. As each new technology or business model emerges, banks and credit unions ask: do we jump in fast or take it slow and steady? It’s not always strictly an either/or choice. Some institutions mix it up, perhaps rushing into mobile banking while holding back on cryptocurrency.

The researchers at CCG Catalyst decided to put some numbers to these strategy questions. The bank consulting firm surveyed 127 C-level bank executives about their strategic priorities and plans. As they did in their 2021 U.S. Banking Study, the firm segmented the respondents into two groups: progressive financial institutions and traditional financial institutions.

To be deemed “progressive,” according to CCG Catalyst, a financial institution needs to obtain less than half of its technology from any one vendor, work with fintech companies as an integral part of its strategy, and have made at least one fintech investment.

Here’s how the matchup between progressive and traditional institutions is playing out in four key areas of bank transformation: mobile banking adoption, data analytics (and artificial intelligence), banking-as-a-service and cryptocurrency.

It’s no secret that consumers love digital channels, but how much they use digital and which digital channel they use the most differs based on whether they bank with a progressive or a traditional institution. 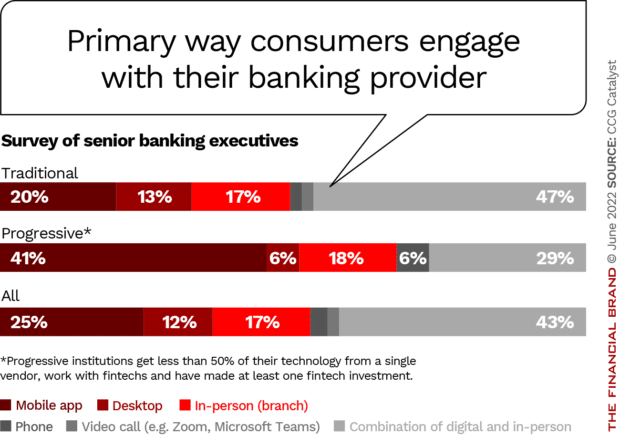 By contrast, consumers at traditional banks are more likely to use a mix of digital and analog channels. What’s interesting is that almost the same percentage of consumers at both types of institutions still visit the branch. No matter how technology savvy they are, consumers still want the option of face-to-face for more complex and sophisticated transactions and financial advice.

The branch is still a viable channel, but banks and credit unions should take a more aggressive approach to mobile if they hope to increase digital adoption rates.

But what consumers at progressive institutions are leaving behind is the desktop. Those financial institutions taking a slow and steady approach to digital transformation are likely still enhancing their desktop solutions.

Although traditional institutions are not putting enough focus on the kind of mobile banking experience consumers increasingly expect, CCG Catalyst believes what’s most important ultimately for any institution is to focus more on the experience and less on the channel. Banks and credit unions should create device-agnostic experiences that can support the next channel du jour.

The report also found that traditional banks tend to focus on digitizing analog processes, such as remote deposit capture, which really just digitizes check deposit. Whereas progressive banks tend to focus on new capabilities such as account aggregation and are more likely to anticipate what consumers will want.

Another area that traditional financial institutions are not paying enough attention to, according to CCG Catalyst, is data analytics and artificial intelligence. Forward-thinking banks are using these technologies both to improve the customer experience, drive efficiency and improve fraud mitigation.

In addition, progressive banks are much more likely to build and manage their own “API-layer” in-house rather than using vendor-supplied “application programming interfaces.” APIs are the building block of modern technology and banks that have in-house tech capability with them have greater freedom of choice in choosing fintech partners and can more easily integrate with third-parties.

As a corollary to that, progressive institutions are almost twice as likely to use an agile approach to product development. This development methodology uses “sprints” to bring products to market quickly and then iterate based on consumer feedback. It is one of the key factors in the success of many fintechs, but has not yet been widely adopted among traditional banks. 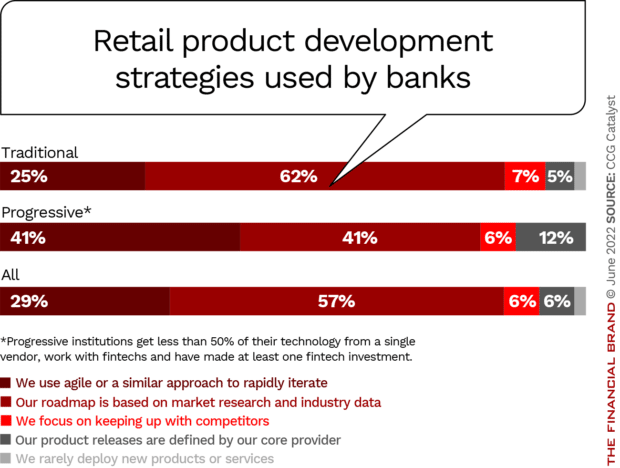 Read More: How Banking-as-a-Service Transforms the Roles of Banks and Fintechs

Banking as a service allows financial institutions to white label their banking charter while a third party handles the front-end customer acquisition and experience. Typically the third party is a neobank or fintech — think The Bancorp Bank outsourcing its regulated banking services to Chime, or Lincoln Savings Bank backing Acorn’s debit card.

As banking-as-a-service becomes mainstream: banks and credit unions will need to offer additional services to differentiate themselves. 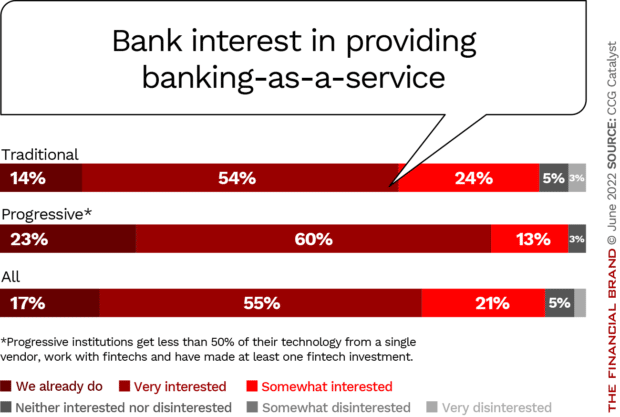 Cornerstone Advisors estimates that the embedded finance market — of which banking-as-a-service is a key part — could grow to more than $25 billion in annual revenue in 2026. Financial institutions can make money from access to low-cost deposits and fee revenue, even though they remain largely out of sight to the end user.

Since not that many financial institutions provide BaaS services, third-parties such as fintechs and neobanks don’t have a lot of banks and credit unions to choose from. But as BaaS becomes more mainstream, just being in the BaaS game won’t be enough.

CCG Catalyst predicts that banks and credit unions will need to differentiate themselves, perhaps offering advanced fraud capabilities or cryptocurrency services. “This kind of creative thinking is what will make the difference between those that get on the bandwagon and those that take this concept to the next level.”

Read More: How Banks May Become Irrelevant in Next Decade

Cryptocurrency Services: Still Up for Grabs

Given what happened to stablecoin markets — a key area of cryptocurrencies, in late spring 2022 — along with the plunge in Bitcoin and other cryptocurrencies, there clearly is risk for financial institutions to engage in this business. Yet traditional markets were rocked as well during the same period, and some of the biggest banks in the U.S., including Wells Fargo and JPMorgan Chase offer cryptocurrency investments to wealth management customers.

Other institutions that have been active in crypto include Vast Bank, based in Oklahoma, which says it was the first nationally chartered U.S. bank to offer crypto through a mobile app. Digital-only Ally Bank offers crypto-specific funds and stocks, as well.

Many banks and credit unions — especially forward-thinking institutions — believe that their institution will offer cryptocurrency services within the next five years, despite the setbacks. 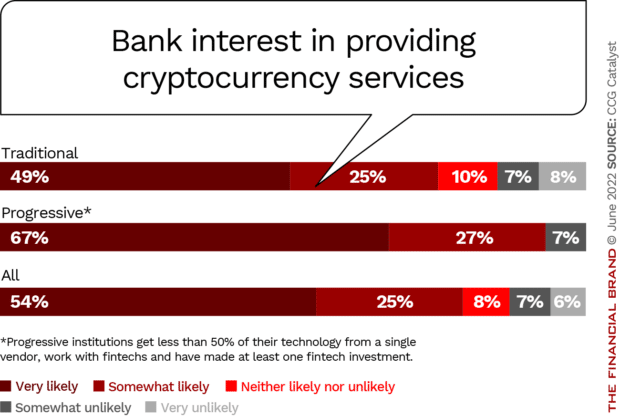 The institutions staking out a claim are looking beyond the immediate volatility towards a future that encompasses decentralized finance, blockchain, the metaverse and Web 3.0 (or Web3). In all of these emerging trends cryptocurrencies are a key element.