Subscribe Now Get The Financial Brand's FREE Email Newsletter
Mixing advanced technology, fintech partnerships and a customer-first culture can give community banks and credit unions an edge. Utah's TAB Bank takes that one step further, pairing it with a national niche-market model. In the process, the bank is drafting a potential roadmap for other smaller institutions.

There’s growing angst among many community banks and credit unions. It’s for good reasons: aging customer bases and managements, the popularity of digital banking products offered by nonbank competitors, the massive brand and budget power of the megabanks, and more.

Truth is, however, the megabanks and the fintechs both have baggage. And traditional community banks and credit unions, if they become nimble and are willing to partner and adopt a business model that differentiates them, can actually have an edge over these much-heralded competitors.

Such is the strongly held belief of Curt Queyrouze, President and CEO of Ogden, Utah-based TAB Bank. “Agility and speed are going trump size over the next five to ten years,” Queyrouze tells The Financial Brand. “And that’s why I think it’s exciting to be a small bank that is leaning into technology.”

The innovative business model of this small bank is generating strong results in profits and growth. It is well worth studying as a source of ideas. 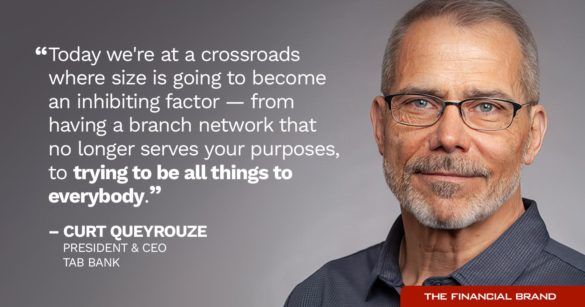 TAB Bank is not a typical community bank by any means. It is a digital-only state bank that grew out of a truck-stop operator’s industrial loan bank.

Those who only consider community banking from a traditional geographic viewpoint may dismiss TAB Bank as a source of inspiration. That could be shortsighted, however. The bank had its best-ever years in 2020 and 2021 and generated a third quarter 2021 ROA of 2.44% and ROE of 25%.

Its success is powered by five traits: a niche community model, fintech partnering, modern technology, a strong focus on data and customer-first DNA.

Truckers and Micro Businesses as Communities

TAB Bank’s full name is Transportation Alliance Bank and it began life in 1998 as an affiliate of the Flying J truck stop chain. The chain’s owners wanted a way to meet the needs of independent truckers who, after delivering a load, needed funds to purchase fuel to allow them to pick up and deliver their next load.

The company initially used fax machines and ATMs at truck-stop kiosks to convert bills of lading into funds. Essentially a factoring operation, the business was set up under Utah’s industrial loan bank charter.

It was a pretty simple — and profitable — business, states Queyrouze [pron. “Kay-Rose.”]. However, for other reasons, Flying J went into bankruptcy and was subsequently merged into another company. The ILC unit was spun off and converted to a state-chartered Utah bank, but was still owned by the original Flying J owners, now operating as a family office.

Queyrouze came aboard in 2014, and was charged with expanding the bank’s product lines. He also began a major digital transformation, with investments in data platforms and updated technology. The Louisiana native had worked for Whitney Bank — mostly in credit positions. His father was lifelong community banker.

TAB Bank currently has about 300 employees and $1.2 billion in total assets. Trucker-related business still comprises about half of its loan book and “drives the bulk of our revenue,” Queyrouze states. However, the bank has a growing business originating consumer loans for six (soon to be seven) marketplace lenders and fintechs.

The CEO says that while still small, this combination of banking-as-a-service and loan participations is “a huge revenue model,” mainly non-interest income.

A New Model of Community Banking

Queyrouze staunchly believes TAB Bank is a community bank, just not in the usual sense. The bank’s main community at present — independent truckers — is what others might describe as a national market niche. The bank is already well along in expanding into a similar model for the micro- and small business market, which shares many of the same traits as the trucking segment.

“A truck driver’s office is the cab of the truck,” says Queyrouze. “And for the person that owns a bike shop their office is the storage room in the back where they keep the parts. They don’t have staff to do cash flow forecasting. That’s our community that we’re going to serve. And it’s huge.”

The bank added the consumer side of the business because, as the CEO states, “every small business owner is also a consumer, and you can’t ignore one aspect of who they are if you really look at a customer persona.”

These niche markets are all underbanked segments of the economy — which is the bank’s overall focus. “I like leaning in and lending money where other people won’t,” Queyrouze states. In a way, that is classic community banking, except instead of being done on a hunch and a handshake, it’s now driven by technology, data and fintech partnerships.

Towards a Single Source of Data

That combination of tech and data will take the bank to what it sees as the next level — financial advisor to small businesses and their consumer owners, according to Queyrouze. In time they will also offer help with invoicing, collections, taxes and more, all done through fintech partnerships. “As a small institution I don’t need to build all that,” says Queyrouze, “I need to be able to partner at speed. And all of that focuses on data management and data movement.”

Queyrouze and his team have been working for several years to unlock customer data from legacy systems. “We didn’t have any data management people when I arrived. Today it’s the heart of everything we do.”

They’re also looking at technologies that will allow them to have one source of data that they can easily access and share with permission per the customer’s request.

Is the Megabanks’ Day Fading?

With the technology available to community financial institutions today, and with its cost coming down, Queyrouze believes the competitive paradigm is shifting.

A smaller institution can consume technology much faster and with much more direct impact on the customer and the solution, the CEO maintains. “The bigger you are, the harder it is to really connect with the customer to meet them where they are.”

That kind of small-bank agility allowed TAB Bank, early in 2021, to roll out in quick succession a significant upgrade to its mobile app — including a simple money-movement workflow, and a “spendvesting” debit card that rewards customers with shares in a stock fund in lieu of cash back.

“There’s always been talk about scale and size in our industry,” Queyrouze continues. “I would say today we’re at a crossroads where size is going to become an inhibiting factor — from having a branch network that no longer serves your purposes, to trying to be all things to everybody.”

He believes the big banks will migrate to generic products to serve a broad audience. Community institutions on the other hand have a great opportunity to focus on value and impact.

Regarding the swarm of B2B neobank competitors TAB Bank is up against — such as Novo, Mercury, North One — Queyrouze is decidedly sanguine.

“It’s such a huge market that it’ll be a long time before I think we’re stepping over each other,” he states. “Right now, the market is still just wide open. It’s kind of like the land rush.

“Real-time payments will absolutely change the economics for a lot of people and businesses in this country.”

However, Queyrouze does point out that many neobank models are built upon things like interchange fees or friction in payments. He predicts these revenue models will be squeezed. That’s a key reason why TAB Bank has avoided becoming dependent on transaction revenues.

“We want to stay focused on credit and deposit products that focus on the customer’s well-being first. That drives how we decide where we’re investing and how we’re going to do it,” the CEO states.

He says that customer-first focus is core to the bank’s success to date. “If you really get it into the DNA of your staff, it creates this virtuous cycle that just starts boosting revenue,” he states.

By contrast, Queyrouze adds, “fintechs are funded by VC’s looking for unicorn status and looking for scale. And when you’re growing a business rapidly like that, the customer often gets lost somewhere.”