Subscribe Now Get The Financial Brand's FREE Email Newsletter
Digital banking has been slower to impact consumers' savings habits than their checking and card transactions. Online and mobile banking experience, however, has begun to alter consumer attitudes. Understanding the different types of saver behaviors can help banks and credit unions hold onto their deposits.

Nearly two-thirds of U.S. consumers are thinking about opening a new savings account, and about half of them (47%) say they would be comfortable with an online-only provider like Ally, Discover or Synchrony, according to a survey conducted by the Consumer Bankers Association and Novantas.

As consumers do more and more banking online their views about handling their money change — to the point where one out of five would consider keeping their savings with Amazon or Google if those companies offered a savings account, according to the CBA/Novantas study. Looked at from the other end of the telescope, the study notes that nearly 80% of the 3,000 consumers surveyed would not consider placing their savings with a big tech firm. However, among those consumers surveyed who are already comfortable with online-only providers, four out of five (79%) would consider saving with a big tech company if they could.

These are hypothetical statistics, of course, since these big tech firms do not have a banking charter, and may never apply for one. But they may not need to. They have already shown that they are willing to partner with banks as Apple did with Goldman Sachs. In fact, the Apple Card functions as much like a debit card as a credit card.

The CBA/Novantas survey analyzed responses to numerous attitude, behavior and preference statements from which five categories of savers emerged: “Careful”; “Active,” “Traditional,” “Anxious” and “Bank-Detached” (brief descriptions of each appear in the table below). Consumer willingness to bank with an online-only provider ranged from 26% among “Careful” savers to 100% among “Bank-Detached” — not surprising because the latter group are described as “very comfortable with online banks.”


.
Regarding the willingness to save with a big tech firm, the responses range from 4% and 7% among careful and traditional savers to 35% among active savers and to nearly four out of five (79%) of “bank-detached” savers. The latter segment was the smallest group in the sample, at 10%, but it likely is growing.

Responses to the same set of attitude statements were also analyzed by size of savings balances in the CBA/Novantas study (respondents had to have at least $2,000 in savings). The data show that the higher the savings balance, the more open consumers are to online-only providers.

According to the findings, consumers with lower savings balances are more traditional in their savings habits. More than half (54%) of those at the lowest end, in fact, say they require a physical location to do their banking compared with 39% of consumers with the highest balances.

“Overall, nearly four out of five say they would only keep savings at a traditional financial institution.”

When viewed by size of balance, the responses show a tighter range of opinions about whom people are willing to save with. For the sample as a whole, nearly four out of five (79%) say they would only keep savings at a traditional financial institution.

Good News for Traditional Providers, But Will it Last?

As mentioned, the CBA/Novantas survey found that two-thirds of consumers polled are considering opening a new savings account. The researchers inquired where people would be most likely to open a new savings account, and the results came in strongly for traditional institutions.

The above data show on the one hand that consumers’ preference for savings is still solidly in the camp of banks and credit unions. On the other hand, however, almost the same number of consumers (47% versus 54%) would opt to open a new savings account in an online-only bank versus a traditional institution, an indication that things indeed have changed.

Add to that the fact that millions of consumers (in total) have signed up with Acorns, Chime, Moven, Aspiration, Simple and other mobile-based savings/investment apps. In addition, a number of banks and credit unions have been falling in with the trend to provide digital savings and budgeting tools.

All this may seem overblown considering how meagerly American consumers tend to save — just 6% of disposable personal income now versus 11% in 1979, according to government data. Novantas analysts, however, estimate that roughly a quarter of financial institutions’ total shareholder value of $1.3 trillion — i.e. more than $500 billion — is dependent on the size and composition of its retail savings balances.

Novantas considers both checking deposits and existing (back book) savings deposits to be non-rate sensitive. In regard to rate-sensitive retail deposits — CDs and new savings accounts, primarily — the report states that two-thirds of consumers who are thinking about opening a new account say they would need a 1.1% rate increase before they would consider opening a high-rate account at a direct bank. The report also notes that 30% of rate-sensitive balances have already moved to direct banks.

“Most customers have a mix of both elastic and inelastic savings at different times.”

While retail banking providers have traditionally thought of consumers “in a very binary fashion with respect to rate sensitivity,” Novantas states — that is, either price-elastic or inelastic — the research found that consumers have different rate priorities for different portions of their savings. “As much as 60% of balances are rate-inelastic and most customers have a mix of both elastic and inelastic savings at different times,” Novantas states.

Retail deposits fall into three broad categories, each with a clear set of uses, according to the CBA/Novantas study. The first the report calls “today” money. These funds, used to cover unexpected medical expenses, unemployment, etc., typically are held in checking and existing savings accounts. Nearly two-thirds (61%) of “today” deposits are held in consumers’ primary financial institution, the report notes. 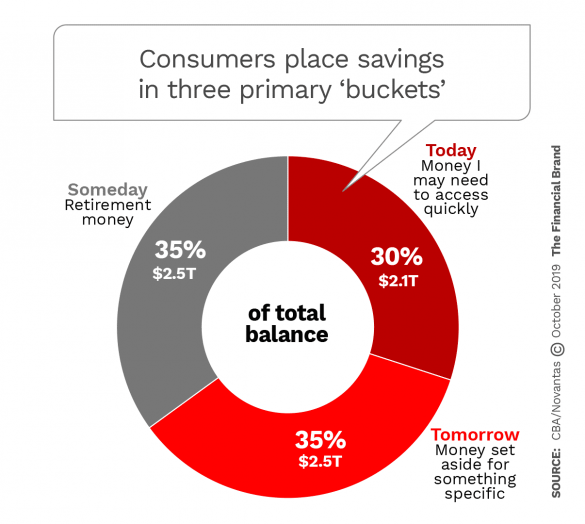 The report doesn’t comment on “Tomorrow” money, which are funds set aside for things like travel, home improvement, education, etc. Of “Someday” money — retirement funds — Novantas says 52% of the total deposit balances are held by banks and credit unions versus brokerage firms or robo-advisor apps.

Banks and credit unions that can identify the habits and preferences of the different types of savers and across the three different deposit categories can target the consumers accordingly, the report states, developing products and features for different needs.