Subscribe Now Get The Financial Brand's FREE Email Newsletter
While competition with fintechs and the emphasis on strong CX are important to factor into new updates, Americans are looking for essential online and mobile services more than they want leading-edge features of limited use.

The extra push that COVID-19 has given to digital banking and payments continues to accelerate into 2021, according to research by Chase. However, even though the coronavirus continues to rage, maintaining the digital momentum of 2020 beyond the current appeal of contactlessness and remote banking isn’t a given. It will require banks and credit unions to double down on seemingly pedestrian features that consumers require to feel comfortable with new channels.

JPMorgan Chase surveyed equal numbers of their own customers and non-customer users of banking services regarding their usage of digital services.

An interesting overall observation is that while there is so much talk about exciting fintech apps and more leading-edge functions, the strongest interest shown by both groups of respondents is for basic functionality that assists in daily financial living.

“Reflecting some of the most highly rated features,” the report stated, “convenience, security, expediency and safety are the primary reasons for using digital payment options,” for example.

Consider this ranking of Chase customers’ priorities for online banking:

The current usage of mobile banking apps among Chase digital customers, shown in another table, below, shows a similar emphasis. These statistics argue that basic functionality of essential digital services means the most to consumers, especially as many began using digital channels for the first time during the early days of COVID-19. The survey was conducted in the third quarter of 2020.

Another key message in the survey data is that it remains important to cater to both desktop and laptop users as well as to smartphone users. Among Chase customers, 82% use smartphones and 78% use computers for digital banking, while among noncustomers 83% use smartphones for banking and 73% use computers. Tablets were a less-important factor, with one out of four of both groups relying on them for digital banking.

In the chart below, the study explored the reasons more consumers are going digital, making clear that the migration to digital is based on more than COVID fears. 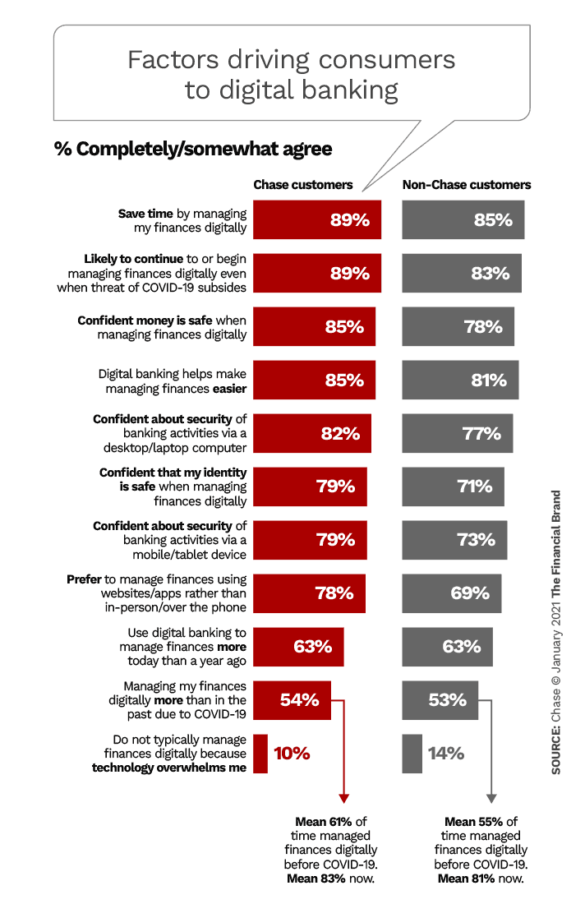 Results in the payments area show that cash has had its day, with digital payments channels attracting increasing usage for reasons beyond health concerns.

It’s significant, as shown in the bottom of the chart, that the carrying of cash has fallen so much that only about half of consumers say they always have it on them.

The impact of this finding can be spun two ways. On one hand, the continued ubiquity of ATMs, tappable even with smart phones, may be persuading consumers that if they ever need sizable amounts of “real” money that they will be able to readily get it. On the other hand, even as COVID has made the drive-through ATM a “thing” again, the growing range of noncash payment channels may just be writing the obituary for cash overall. 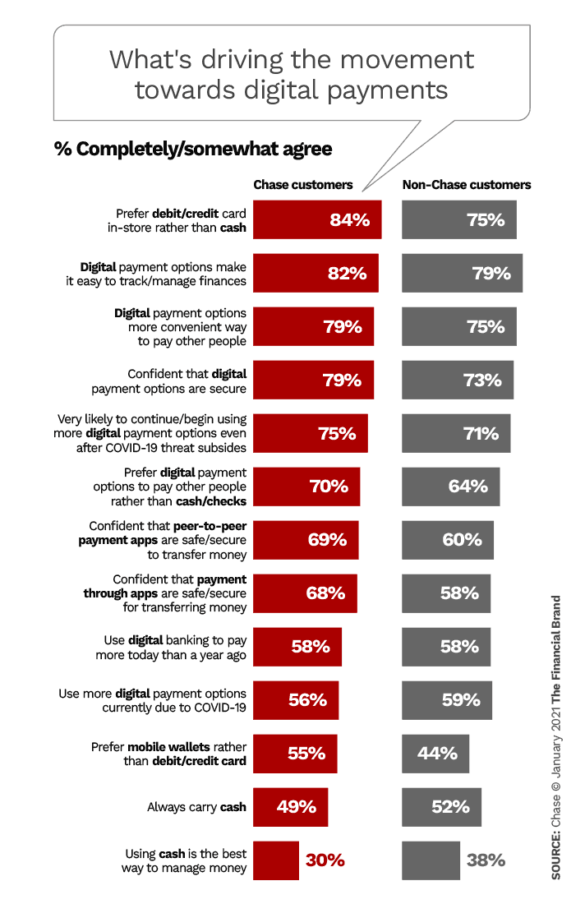 The survey found that interest in peer-to-peer payments is growing, with 30% of users signing up in last six months and nearly half of longer-term users using P2P more often than they did a year ago. The total number of mobile wallet users has picked up by 30% as well, though long-time users have tended to use it a bit less frequently than a year ago. That’s because more purchasing has occurred online.

Interestingly, one of the holy grails of digital banking for some years has been digital account opening — especially being able to do it entirely on a mobile device without the need for an in-person visit.

Yet, as the chart below shows, overall for both the Chase and non-Chase samples, only about one in ten respondents use this functionality. It comes in last in both samples even for Gen Z and Millennials.

As the chart shows, there are clear similarities between the generations in some regards. In others Gen Z and Millennials stand out. For example, both groups put more priority on mobile banking routines that enable creation and tracking of budgets, setting up monthly views ahead of spending and creation of savings goals, and tracking of those goals. However, the use of these newer options is far from overwhelming. 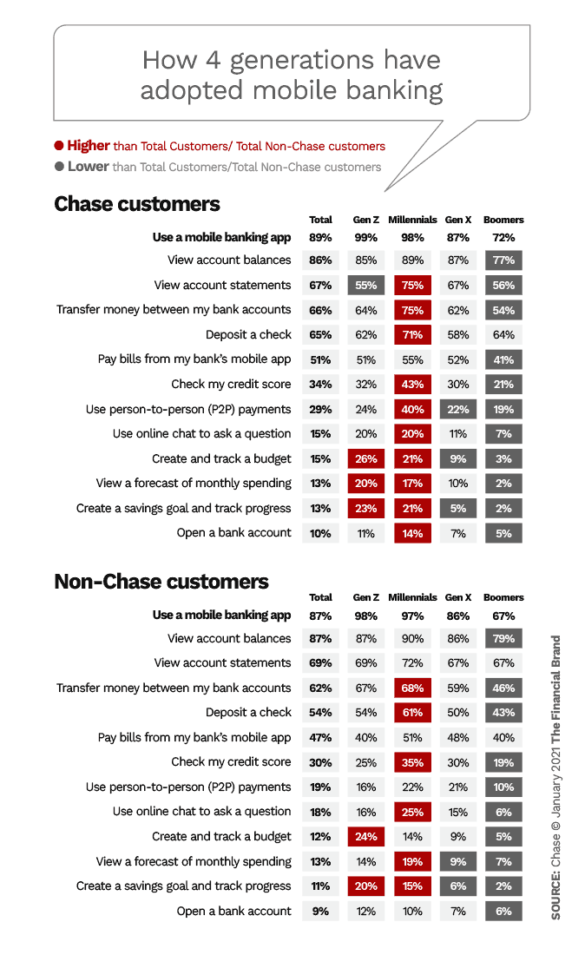 Roughly a third of both the Chase and non-Chase samples value the ability to check credit scores via mobile app. This is of relatively strong interest for all groups except Baby Boomers.