Subscribe Now Get The Financial Brand's FREE Email Newsletter
Utah-based MoneyDesktop is relying on a unique, eye-catching and dynamic user interface to drive impressive adoption rates of PFM among consumers at both banks and credit unions.
Subscribe Now!

MoneyDesktop is the fastest growing personal financial management (PFM) solution for financial institutions today. MoneyDesktop saw total customer growth of nearly 80% from 2011 to 2012, as well as a 445% increase in recurring monthly revenue.

It was a record year for the company. More than 400 financial institutions have chosen MoneyDesktop as their PFM provider. In recent months, MoneyDesktop signed more than 270 new clients, and added 22 tech partners in online banking, core data systems and payment network space, including industry powerhouses such as First Data, Sybase and Visa. The company also created more than 60 new jobs during the year, increasing its workforce to more than 90 employees.

Why? What explains this meteoric growth? What’s the secret sauce fueling their success?

What Are Bubble Budgets?

MoneyDesktop describes Bubble Budgets as “a better way to budget, visualize and interact” with financial data. Bubble charts are the cornerstone of the concept. Using circles, or “bubbles,” to represent budgets allows you to quickly identify budgets that need the most attention. At a glance, a user can determine a budget’s health (color), significance (size) and progress (meter) relative to other budgets. 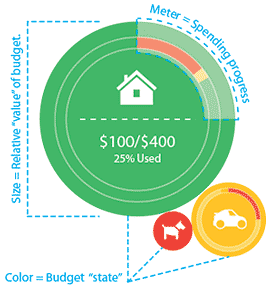 “MoneyDesktop is doing more than just putting lipstick on a pig,” observes Jim Marous, author of Bank Marketing Strategies. “Its patent-pending Bubble Budgets combines colors, variable sizes and movements to give users an undeniably clear picture of their budget status on a yearly, quarterly, monthly, weekly, or even daily basis.” 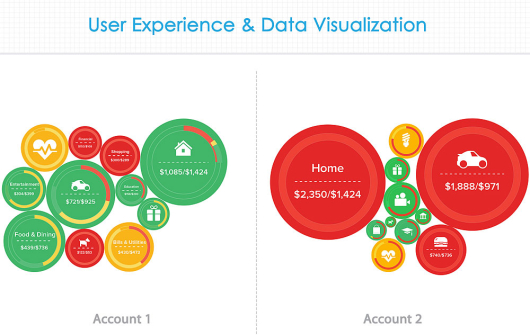 With the normal way budgets are visualized, it can be hard to spot which account has problems. But with MoneyDesktop’s “Bubble Budgets,” it’s easy to see that the budget on the right is the one that’s wildly off course. 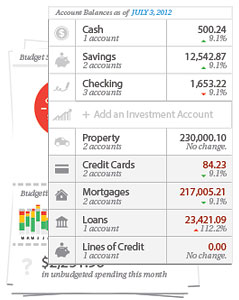 Account Aggregation & Expense Tracking – Most people have their financial relationships distributed among a range of providers — a checking account somewhere, a credit card from a bank, a debit card from a credit union and perhaps some store cards. Having financial information spread across multiple websites makes it difficult to get a clear financial picture. MoneyDesktop PFM automatically categorizes and tracks spending from users’ various financial accounts, giving them a comprehensive view of where all their money is really going. MoneyDesktop aggregates over 10,000 financial institutions and they add more every month. Account aggregation gathers basic financial information from all of a user’s different financial accounts and organizes it into one place.

Budget Creation – MoneyDesktop PFM helps users create budgets that reflect the way they actually spend their money, not just the way they wish they did. A budget created with MoneyDesktop is based off a user’s actual spending history, income, debts & expenses.

Debt Management – Most consumers have borrowed beyond their means at one point or another. Getting out of debt takes discipline, and that’s why MoneyDesktop includes step-by-step guided instructions on how to get debt under control.

Financial Reporting – MoneyDesktop creates clear and relevant visual reports derived from a user’s real finances. Following the age old adage of “A picture is worth a thousand words.” we make it easy for end users to quickly understand their finances, MoneyDesktop harnesses the power of visual communications to present data relationships in meaningful ways.

iPhone & Tablet App – With MoneyDesktop’s iPhone and iPad apps, users can check all their account balances, automatically categorize and organize transactions, use the Bubble Budget tool, and print/email any report or transaction.

White Label Option – There is a white label option for the MoneyDesktop app. For example, STAR Financial calls their app “Touch,” and it is specifically designed for the bank. Another example is the “My Money Manager” from Mountain America Credit Union. 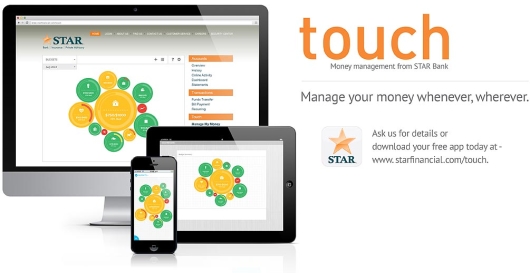 MoneyDesktop has swept the financial innovation space in full force, winning basically every award out there:

“MoneyDesktop’s interface is like a work of art.”
— Phil Ryan, Bank Innovation

MoneyDesktop is only company to win two “Best of Show” awards at the prestigious Finovate conferences last year — two wins in two appearances.

One attendee, Bradley Leimer, VP of Online/Mobile Strategy at Mechanics Bank said MoneyDesktop’s Finovate presentation was “the first time in several years that I actually got excited about anything to do with PFM.”

“When you combine an immediately engaging user experience with the ability to truly drill down into your financial data, and then add integration of a very unique deals platform – that’s a win in my book any day,” Leimer added.

Mary Wisniewski with American Banker was equally impressed by MoneyDesktop’s demo. Visually, its PFM tools are stunning, and watching them demonstrated onstage made me want to look — and interact — with my finances.”

“Trust me,” she says with all seriousness. “That never happens.” 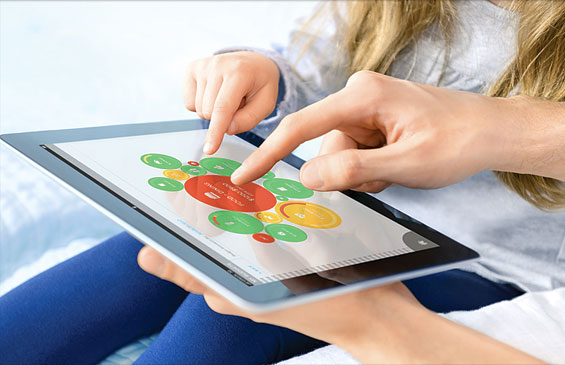 Equally critical to the user experience, MoneyDesktop is easily integrated into a bank or credit union’s existing online banking platform — apparently by dropping in only a few lines of code. If it sounds slick, it is.

But Ryan Caldwell, Founder and CEO of MoneyDesktop, is keen to point out that his company’s PFM tool is more than just snazzy bells and whistles: “It helps you increase loan volume, attract new users, and stay ahead of the competition.”

“With MoneyDesktop as your PFM partner, you can now protect your online banking users from signing up with competitor bank or third-party PFM like Mint.com,” Caldwell adds. 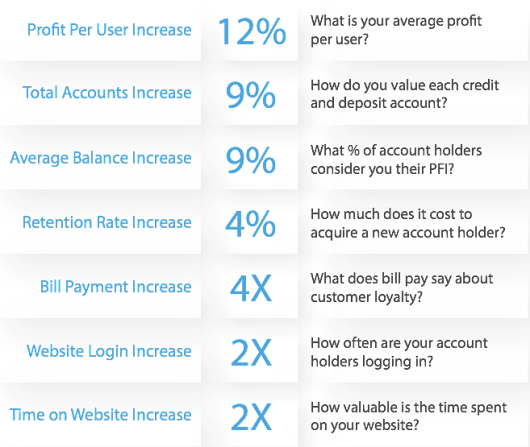 Caldwell feels there is a me-too mentality impeding innovation in the PFM space. According to Caldwell, many PFM providers have been trying to do little more than duplicate the success of standout solution Mint.com. “We saw more opportunity in creating a cohesive slew of benefits for consumers, financial institutions and online banking partners.”

Caldwell doesn’t list specific names for his competitors, but some of the providers offering PFM solutions to banks and credit unions that include Intuit FinanceWorks, Geezeo, Meniga, Lodo Software, Yodlee and Money Strands. Standalone PFM solutions offered directly to consumers include Mint (the 800-pound gorilla), Credit Karma, Learnvest, BillGuard, Personal Capital, Hellowallet and others. A handful of financial institutions have built their own proprietary PFM systems, most notably PNC’s Virtual Wallet.