Subscribe Now Get The Financial Brand's FREE Email Newsletter
The popular banking and insurance company, a perennial leader in customer satisfaction, upgraded its mobile banking app, already considered one of the best. For USAA, its mobile app is how most customers do business with it, so a great app is a 'must-have.' Learn what USAA did to improve its app and why.

Because USAA’s customer base is restricted to former and current military service men and women and their families, the bank is not eligible to be in J.D. Power’s official rankings. However, the research firm lists the Texas-based institution in its ranking charts in a different color separated from the rest. Yet in almost every case USAA’s satisfaction scores run higher than any of the top-ranked institutions in the official list.

In J.D. Power’s 2021 Banking Mobile App Satisfaction Study, for example, USAA outscored not only the top regional banks, but all listed banks, including Bank of America, Chase and Capital One. Pretty impressive considering that USAA has total assets of $200 billion, inclusive of its banking, insurance and investment units. Even more impressive is that USAA’s high score was based on a 10-year old app, and that usage of its app has increased 12% annually for the last five years.

But all success is fleeting, so in March 2022, the company began rolling out a major upgrade of its mobile banking app. Of USAA’s 13 million members, ten million (77%) use its mobile app, according to Ryan Barth, Vice President, Enterprise Digital.

“We’re a highly digital organization,” Barth says, “which makes sense when you think about our military members who obviously move frequently. We have to be able to meet their needs.” Plus the bank is essentially branchless, with only four banking locations. 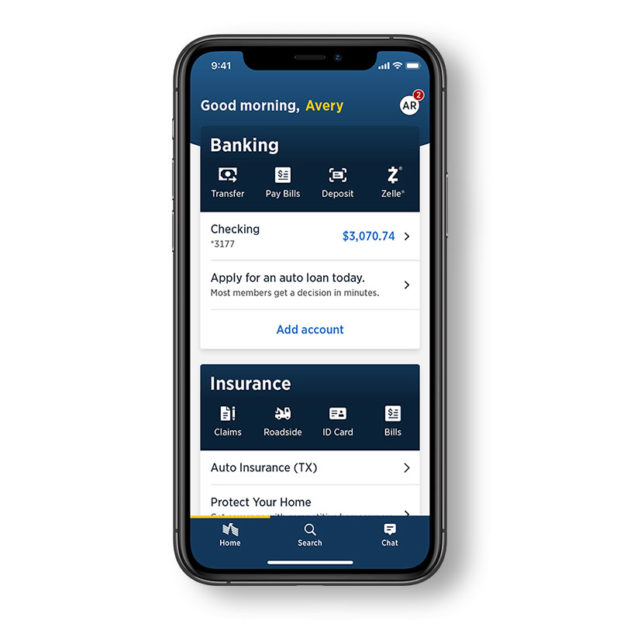 On average, USAA members engage with the mobile app 18 times a month, says Barth. Early results from the rollout of its new app showed that members were engaging one extra time a month, which Barth considers very encouraging.

The Financial Brand caught up with Barth to discuss details of the new mobile banking app, what plans the bank has for additional improvements, and what retail banking trends it’s tracking. The dialogue below has been edited for length and clarity.

What led you and your team to undertake a major upgrade of your mobile banking app?
Ryan Barth: It primarily revolved around the need for a faster app that was simpler and easier to use. We had a ten-year old app, and the proprietary technology it used was coming to the end of its life.

Also, we wanted to build a smarter app that would leverage machine learning to integrate personal insights we know about our members to deliver an experience that would resonate with them.

Did you switch to an outside technology vendor’s mobile banking platform?
Barth: No, we still have in-house developers — we don’t outsource that work. Without getting too technical, we modernized the technology by migrating to industry standard components. Development is now native to the app so we can deploy code much quicker. And we reduced load time across the app by 6.5 seconds. 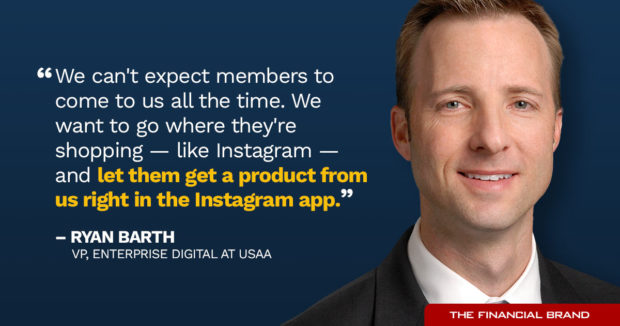 What are some of the highlights of your new mobile app?
Barth: The most significant changes relate to personal insights based on what we know about our members and their actions. We have of course various alerts and reminders. But what we are delivering now we call “delighters.”

For example, if we know a member served in the Army and the anniversary of the Army’s founding is coming up, we’ll send a note about that when they log in so they think, “These guys know I was in the Army, and that it’s Happy Birthday Army Day. That’s pretty cool.”

Insights also include interactions around life events. When the machine learning predicts a member is deploying for active duty, for example, we would launch a personalized experience — a series of checklists to make sure they have their finances in order before they deploy.

The flip side of that is when they’re coming to the end of their military career. That involves a series of life events and we personalize those experiences. We are finding high engagement when we present these personalized experiences. And that makes the engine smarter.

What about the design and user experience of the app. What changed there?
Barth: We made it much simpler for members to use mobile check deposit, Zelle and the other existing functions with a completely new design and simplified navigation. 98% of all transactions on the app are now accessible with two taps or less. And we’ve put the more common things that people want to do on the home screen in context, right where their accounts are.

Also, we knew that it was difficult at times for people to find what they were looking for in our old app. So we built a new search engine using the latest natural language technology to make sure we understand their intent. We didn’t want people to have to type keywords to find what they’re looking for. This works with our virtual assistant, Eva.

Do all functions take place within USAA’s mobile banking app?
Barth: It depends on the experience. Our goal over the next 18 to 24 months is to contain all experiences within the native mobile app. But today they’re not all built out. For members who are trying to get a new insurance policy, for example, the app might move them to a web page.

Read More: Why USAA is The Most Beloved Financial Brand on Earth

Your virtual assistant, Eva, has been around since 2013. Was that capability upgraded as well?
Barth: Yes, this version of Eva is smarter. We’ve added more intents. Also, we modernized the natural language processing technology so that now Eva can understand slang as we add words. For example, if somebody says, “Hey, I want to move my cheddar.” Eva knows they’re trying to say, “I want to transfer funds.”

A future enhancement for Eva will be to develop a persona. We will give her more of an identity so people can relate to her more.

What about handoff from bot to human, was that addressed in the upgrade?
Barth: We’re continuing to make improvements, and part of that is building what we’re calling an “asynchronous experience” for our members. So as they chat about a service with Eva, and let’s say they want to talk to one of our frontline employees, they can click a button that will launch a session with the person and we’ll carry over the messaging for that front line rep. That enhancement is coming later in 2022.

But right now, we’re at 78% containment within Eva. In other words, Eva handles the question 78% of the time and a member does not have to call up or live chat with an agent, which is an industry best-in-class.

A Look Ahead for USAA’s Digital Banking Operation

Aside from the ongoing enhancements to Eva, what else is USAA working on with its mobile app?
Barth: One thing coming down the pike is what we’re calling next-best action — that is, using artificial intelligence to refine what our members need to see next. We collect a lot of data across our three lines of business and we don’t want to bombard people with information. Next-best action is not about marketing and getting members to use more products. It’s what they need to do to maintain and improve their financial security. It can be something they need to do, such as sign up for overdraft protection, or pay a bill that’s coming up.

What trends are on your radar in digital banking?
Barth: What you’re starting to see is banks deploying their apps or pieces of their apps in other spaces.

For example, if a consumer is on Instagram and we put an ad in Instagram for USAA, we’re studying whether or not it makes sense to keep an interested consumer within the Instagram app. In other words, if the person wants to get an insurance quote from us, they can do that right in the Instagram app without having to launch over to USAA.

We cannot expect our members — or prospects — to come to us all the time to get new products. We want to go where they are — where they’re shopping. In order to do that we have to build out our digital platform capabilities. That is high on our radar.